The punk rock band is one of few with an alter-ego: a sunny ensemble called Mariachi El Bronx.

There’s nothing too sinister about Mariachi El Bronx, the alter ego of L.A. punk rockers The Bronx, but the duality of a band that pursues both identities with equal career-driven vigour is a rarity in this day and age.

Where The Bronx goes for the critical jugular in seething two-guitar-attack classics like “ Heart Attack American” and “They Will Kill Us All (Without Mercy),” Mariachi El Bronx pulls out sunnier arrangements, trumpets and mariachi rhythms for more dramatic and lighthearted fare like “48 Roses” and “Raise the Dead.” 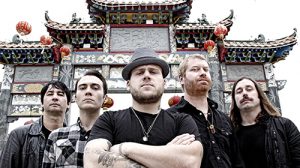 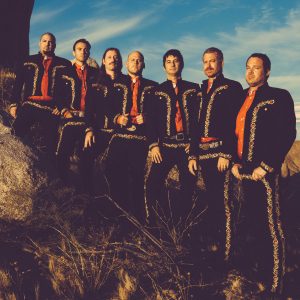 “We did a whole U.S. tour where Mariachi opened up for Bronx,” Caughthran recalls. “Played twice every night.”

While The Bronx bowed in 2002, Mariachi El Bronx — appearing on a triple bill at the Danforth Music Hall Friday sandwiched in between headliners Clutch and the Mike Dillon Band — made their first appearance in 2006.

“We were just trying to do something different,” said Caughthran in a phone interview.

“It was just kind of a creative way to snap ourselves out of writing the same stuff over and over again, and it just felt really good. It felt natural and felt really weird at the same time. It was something in the stars for us and, when it happened it felt so right that we just kind of chased after it.”

After The Bronx dropped an album on Island Def Jam, the band found a more sympathetic ear with the Dave Matthews co-owned ATO Records. In a rare example of marketing broad-mindedness, the label allows the quartet to pursue both avenues.

While some labels actively dissuade their acts from distracting from what they’re known for, Caughthran says ATO appreciates consumer intelligence.

“Granted, there are probably some people out there who might be a little confused, but I have yet to come across it,” he says. “People are pretty smart, and there is such a drastic difference between the two sonically and esthetically, I think people are able to distinguish it.”

Caughthran jokes that being in both bands makes them work “twice as hard,” but he’s appreciative of the additional creative channel.

“Before El Bronx came along, it felt one-dimensional,” Caughthran explains. “You write a certain way and you express only a certain part of your existence, because it only taps into so many things. So I feel like there’s a whole other side that we’re able to tap into with El Bronx. You know, it’s not all positive stuff but, for the most part, it is. It’s a lot of what’s going right in our world, so we choose to kind of shine the light on that with El Bronx.”

Mariachi El Bronx’s intriguing approach has also enabled them to land gigs outside of The Bronx’s wheelhouse, touring with bands like The Killers and Foo Fighters.

“We do all these different types of shows in all these types of environments because the music is so much more open, know what I mean? So it definitely opened doors that way, opened us up to places that The Bronx were a little too abrasive to get into, because The Bronx is kind of ‘show up and trash the place!’”

Caughthran says the next new music coming from his troupe will be a Bronx album, though he expects a Mariachi El Bronx EP will follow not long after.

And if a certain U.S. president-elect continues to harp on about building a Mexican wall, will that help Mariachi El Bronx’s career prospects?

“I hope so,” Caughthran replies. “I’m really hoping that the Trump presidency really skyrockets Mariachi El Bronx into the public eye. If we have to be the soundtrack for the apocalypse, it’s our cross to bear.”

The Bronx are masters of the two-faced band | Toronto Star

While the duality of The Bronx/Mariachi El Bronx is rare, it’s not unprecedented. Here are some examples, both historic and current:

Hank Williams/Luke the Drifter: Williams wanted to record some narratives, but the country pioneer’s producer, Fred Rose, felt the approach would dilute interest in his regular fare. So Williams recorded his “talking” songs under the pseudonym “Luke the Drifter” and, when he performed them on numerous radio shows, would announce his alter-ego before playing the number.

Parliament/Funkadelic: Led by George Clinton, these one-time Toronto residents used the same personnel throughout the 1970s for the two bands, who were signed to two different labels. Parliament was a heavier funk/R&B hybrid, while Funkadelic added touches of psychedelia to its R&B. Later merged under the P-Funk All Stars umbrella, members included bassist William “Bootsy” Collins, keyboardist Bernie Worrell and, for a while, Toronto’s Prakash John.

DEVO/Dove, the Band of Love: While busily flogging the musical theory of De-evolution, the band would open its own shows in the late ‘70s/early ‘80s as Dove, the Band of Love: a Christian alter-ego that would find them wearing cheap leisure suits and visors as they performed mild-mannered, Jesus-drenched versions of DEVO tunes.

David Johansen/Buster Poindexter: The New York Dolls rocker turned solo artist has found his biggest commercial success in the guise of martini-swilling lounge singer Buster Poindexter and the hit “Hot Hot Hot” in the late ’80s, including four albums released between 1987 an 1997.

Dallas Green/City and Colour: As counterpoint to post-hardcore rockers Alexisonfire, City and Colour is Green’s extremely successful solo and, for a time, acoustic-driven project. Bonus points for You + Me, Green’s project with Alecia Moore — better known as P!nk — which has performed a few club shows.

Tom Wilson/LeE HARVeY OsMOND: The veteran Hamilton singer/songwriter started out the solo route then, post-Junkhouse and mid-Blackie and the Rodeo Kings, revived his solo career with a self-titled album before turning to the psychedelic folk of LeE HARVeY OsMOND. Beautiful Scars is LHO’s latest.