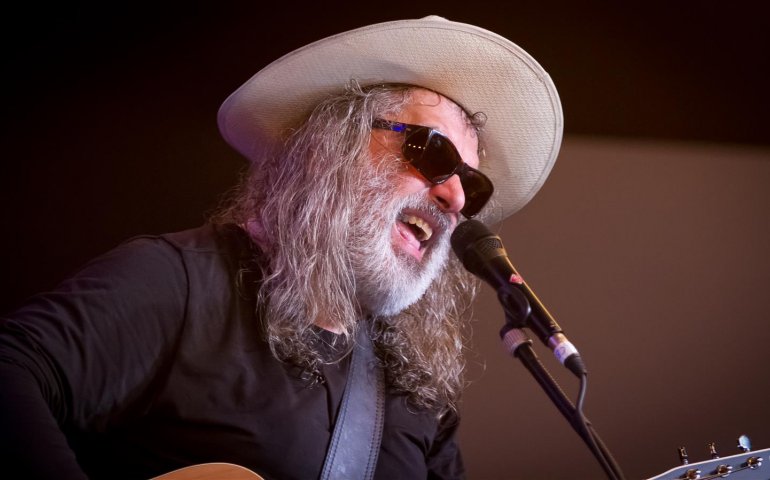 Québec rock icon Michel Pagliaro will make an ultra-rare Toronto concert stop at the Phoenix on September 29, his first appearance in these parts since typewriters went out of vogue.

Seriously, Bigfoot sightings have been more frequent than concert appearances outside of his native province for the man known as Pag, who is widely celebrated as Québec’s first true rock star, and the first Canadian artist to receive gold records in both official languages.

Known for such French-language and English-language hits as “Some Sing Some Dance,” “J’ai marché pour une nation,” “Rainshowers,” “Lovin’ You Ain’t Easy,” “J’entends frapper,” “What The Hell I Got,” “Fou de toi” and many, many others, Pagliaro’s five-decade-plus career has earned him several accolades, including the Governor General’s Performing Arts Award and an induction into the Canadian Songwriter’s Hall of Fame, a SOCAN National Achievement Award and an RPM Gold Leaf Award (the precursor to the Junos).

But to really deliver the significance of Pagliaro’s artistry, we’re going back to 2000, and the Umbrella Music website, for a proper tribute from journalist Howard Druckman, reprinted with his very kind permission.

Take it away, Howard:

“It’s about time we recognized Michel Pagliaro as a hero of Canadian pop and rock ‘n’ roll. That’s right, hero, as in, “a person noted for exceptional achievements.”

In the 70’s, Pagliaro released a decade-long run of singles that were unprecedented – on the homegrown scene – for their pop craftsmanship, rock ‘n’ roll spirit, bilingual unification and enduring playability. Pagliaro bridged all sorts of gaps: Between Francophone and Anglophone Québecers; between Les Québecois and English Canada; between orchestral pop singles and rock ‘n’ roll; between catchy melodies with slick production and his heartfelt, soulful songs.

He was the first Canadian artist ever to receive gold records in both official languages. Any Montréaler who came of age in the 70’s, English or French, has a soft spot for Pag. In 1968, Pagliaro’s self-titled Francophone album sold 50,000 copies in Quebec, a Canadian gold record. In 1971, Pag broke through to English Canada with “Give Us One More Chance,” a Top Ten hit. But it was “Lovin’ You Ain’t Easy” and “Some Sing, Some Dance,” also in ‘71, that truly established him as a big-name rock star “from sea to shining sea.” And there began Pagliaro’s unique motion between English and French, pop and rock ‘n’ roll.

Pag’s English-language singles are stunning, and remain so to this day. With a singular sense of charm and style, he wrote irresistibly catchy, Beatlesque melodies, full of unabashedly romantic lyrics, and then produced them in the grand, orchestral fashion of Phil Spector: Huge string arrangements, layered harmonies, and distinctive sonic highlights, like the castanets in “Some Sing, Some Dance.” Even the country-ish “What The Hell I Got” has its reverbed guitar textures and big string charts.

Meanwhile, Pagliaro’s equally stunning but completely different French-language singles – “J’Entends Frapper,” the biggest-selling 7-inch single in the history of Quebec music, “Louise” and “Fou De Toi” – are all straight-up, meat-and-potatoes rock ‘n’ roll in the spirit of Little Richard. He even recorded “Emeute Dans La Prison,” a gritty Quebecois version of The Robins’ vintage doo-wop classic, “Riot In Cell Block #9.” To French Montréalers, he was a local working-class hero (so to speak), the kid from down the lane howling classic rock ‘n’ roll like their own little Elvis. Un rocker de chez nous. The point is, Pagliaro truly represented — not just Anglos or Francos, or for that matter, Montréal’s Italian community; but for all Montréalers, all Québecois, and even, in some sense, all Canadians. When he played the Montréal Forum, opening for the likes of Procol Harum, Ten Years After or Santana, it was a hero’s triumph. When he sold 100,000 copies of the single “J’Entends Frapper,” or 125,000 copies of the album Pagliaro Live, it was impossible not to cheer him on. And his work holds up remarkably well today.  Pagliaro’s long string of hit singles is among the most consistently listenable and likeable bodies of work that any 70’s rock act has left us.

And considering how much great music was produced in the decade, that’s really saying something.”

Tickets for the show – in association with Q107 Psychedelic Sunday and Canada’s Walk Of Fame – range from a bargain-basement $10.75 to a bargain-basement $25, and are on sale this morning through Ticketmaster at 10 a.m..  Snooze, and you lose, so grab ’em while they’re hot!