Are we being fleeced?

They’re trying to pull the wool over our eyes. In the most insidious four-legged plot to usurp human civilization since George Orwell outed a mammal rebellion in his classic 1945 novel Animal Farm, a certain well-known herbivorous quadruped is covertly attempting to oust man from his privileged position as underpaid farm worker.

According to the St. Catharines Standard, the enablers behind these sheep labour practices are three local grape fermentation processors, or wineries.

Yes, you herd me correctly: sheep, those even-toed, grass-munching ungulates that blissfully lull us to sleep at night as we count them hopping over our imaginary fence and occasionally shill Serta mattresses on television.

Apparently, by being employed for something other than Mouton Cadet, these biological lawn mowers not only keep landscapes clean, trim and picturesque, but they also wander up and down Monofil wires of vines and digest the leaves that selfishly cover the grapes, therefore allowing the delicious green, purple and red fruit to bathe and ripen in the sun prior to being bottled. 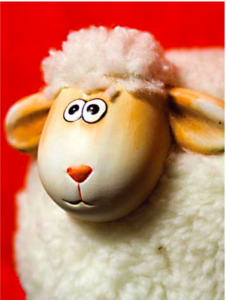 Now, I’m not lambasting the wineries for wanting to save some money in human handpickers. I can, on a grass roots level, also understand the appeal: Sheep don’t require minimum wage, avoid coffee and cigarette breaks, and rarely take sick days.

Let’s face it: despite what they lead us to believe in Telus commercials, most animals don’t own discounted phone plan bundles because they haven’t figured out how to text. . . plus the fact that Telus realizes they’ll never extract roaming charges from sheep in the first place.

As an added bonus to the wineries, munching muttons also provide natural fertilization. . . although, in my own limited recollection of the height at which grapes are grown, it surprises me that sheep can toss that high.

But here’s where I’m raisin concern: where will it end?

Whether you want to point your finger at NAFTA arrangements, Goldman-Sachs conspiracies or the General Motors debacle as the culprits for our general economic woes, let me ask you, when was the last time you witnessed a ram hauling a ton of groceries out of your local A&P, or trying on a new pair of jeans at Wal-Mart?

My guess would be “never,” but then again, I don’t necessarily travel the same social circles as ewe.

Unlike the industrious men and women who slave in the field, sheep don’t go out to the local tavern to commiserate about life over a couple of Red Stripes and a plate of wings. Nor do you see them getting all dolled up for a night and hoofing it over to the Shaw Theatre to catch the latest performance of a Noël Coward classic.

Sheep, by nature, are docile. Armed with great peripheral vision, they gather in mobs, bleat to their heart’s content, and never truly reveal what they’re thinking. These walking sweaters are also pretty astute, boasting an intellect that places them slightly below pigs and the Cacadu Parrot, on equal footing with cattle—and leap years above Sarah Palin—on the Top 10 animal intelligence scale.

And did you know that these lanolin dispensers are also capable of remembering a familiar human face for years?

This is worrisome, because that’s how it all begins: seemingly mild-mannered mutton carefully biding their time as they conduct the most menial of tasks—grazing.

Little do we know that while sheep are busily chewing grass with those expressionless and emotionless faces of theirs, they’re busy plotting revenge and the eventual overthrow of mankind.

These manipulative mouton wait until nightfall and the security of their pen to discuss various flock strategies, returning daily to the same routine so we bipeds are none the wiser. Some of them even willingly go to slaughter because they know they’re sacrificing themselves for the greater good. By appearing on your plate nicely garnished with mash potatoes and perhaps a bit of broccoli or asparagus on the side, they provide your stomach with such a tasty distraction that it prevents you from ruminating about their real motive: to take over the world.

Because they’re so patient and have no timetable, they are simply able to wear man down with their mere presence. . . until one day a light bulb goes off in a potential employer’s head and they invariably conclude, “Wait a second. . . why don’t we reduce head count and hire an animal?”

And one day, when we’re all drunk on some sweet vintage partially fermented by their leaf-lunching ways. . . they’ll strike.

The first step has been taken with their vineyard presence. It won’t be long before the Mounties and various U.S. security agencies like the FBI and the CIA begin recruiting sheep for their facial recognition abilities. Giving these mammals access to weaponry is just asking for trouble.

We’ve seen it all before, people: has Planet Of The Apes – even the lousy Tim Burton remake starring one-time underwear model “Marky” Mark Wahlberg — taught us nothing? Will future generations of area residents wake up one morning and find Queenston’s General Sir Isaac Brock Monument buried up to its neck in sand next to the Niagara River? Will they frustratingly shake their fists in the air and cry in harmonious anger, “Damn ewe! DAMN EWE ALL TO HELL!”

By the way, sheep aren’t the only potential purveyors of animal conspiracy that are constantly in our midst.

I’m telling you now: keep an eye on your dog.