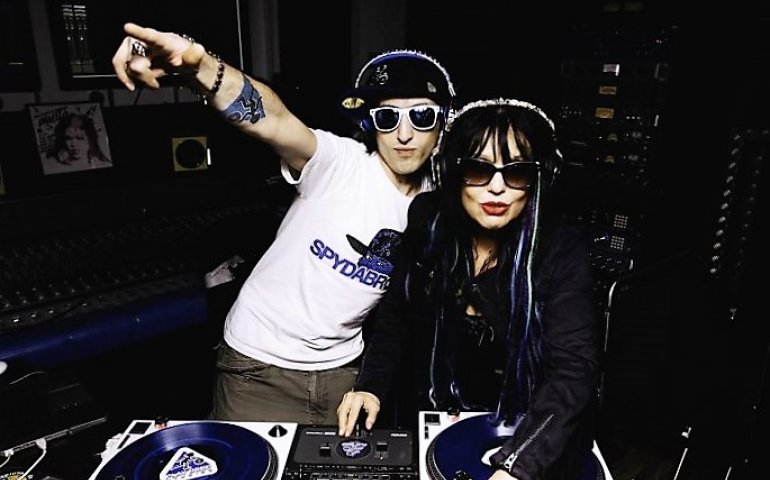 Whether it’s as the recording artist Melleefresh or as a record company owner who helped to globally establish EDM superstar Deadmau5, all Melleny Melody wants to do is play.

But while the zesty and flamboyant Toronto-based singer, songwriter and collaborative catalyst has enjoyed surprising international musical and entrepreneurial success in the U.K. European house and EDM scenes, the 56-year-old Melody has quietly also become one of the genre’s more influential figures.

The fact she’s accomplished the feat largely on the periphery of the music industry spotlight over the past three decades is even more impressive, both as a survivor and an enabler.

“I’ve done my own thing more than anything,” Melody recently told FYIMusicNews. “Whether it’s (with) Jaymz Bee or Alphonse Alixander LanzaIII (Azari & III) -or ‘Dirty 30,’ as I call him – I was always writing songs and doing music.”

Melody’s humble music career beginnings can be traced back to her initial ambitions as an actress: in the 1970s, Melleny Brown was a regular on CBC Radio dramas, performing with the likes of iconic Canadian actor Al Waxman.

“I was usually ‘Screaming Girl in Car’or’Nurse No. 1,'” she recalls.

A brief foray to New York at the age of 21 to attend acting school landed Melody a job as a publicity assistant at Australian-British impresario Robert Stigwood’s RSO Records, manager of Eric Clapton and The Bee Gees and producer of such films as Saturday Night Fever, Grease and Tommy.

“I couldn’t even type,” she admits. “Just entertain the secretaries and get coffee.”

At one point, Scottish comedian Billy Connolly came to town and Melody remembers having to “run around with bags of bananas” that were required for his stage routine at the time.

“It was not my big break to stardom, that’s for sure,” she laughs.

Upon her return to Toronto, Melody became a voiceover talent. “The first voice work I did was ‘The Cute Chick’ on (Johnny Hart’s) B.C.: A Christmas Special,” she recalls. “I was ‘The Cute Chick’ and Barbara Hamilton was ‘The Fat Broad.’ One of my first really good experiences doing a cartoon thing.”

It didn’t take her long to become a regular on Nelvana Limited-generated animated TV series, cementing her profession by playing the roles of “Cheer Bear” and “Baby Tugs” on Care Bears, which lasted three seasons, and later jumping to Inspector Gadget and Star Wars: Ewoks.

“I also had a part in Rock & Rule, which was Nelvana’s big animated feature, and I wrote a song in the movie that I did with Patricia Cullen called ‘Hot Dogs & Sushi.’ That film had a cast of amazing performers, including Blondie, Cheap Trick, Lou Reed and Iggy Pop.

“So I’ve always been borderline music and theatre or acting.”

She also met future husband, Nelvana co-founder and animator Clive A. Smith, in ’79 (he and two partners sold Nelvana to Corus Entertainment in 2000 for C$554m) and gained recognition for ventures other than acting: in the ’80s, her company Mel-Made Madness specialized in fashion design (she dressed the popular ’80s Jaymz Bee-led alt-band The Look People, Billy Newton-Davis and Molly Johnson among others), art cakes, picture frames and other art styles.

She also discovered there was a demand for her singing.

“I was always close to being in music, but never really thought that I could sing.” Melody admits. “Then I ended up in Kensington Sound singing back-up for a kid whose father had bought time in the studio. The son was tone deaf, so I sang ‘Rubik’s Cube Blues,’ co-written by Jody Colero.

“All of a sudden everyone got excited and thought they had something. There was even interest from Island Records in New York. But then a dispute broke out over ownership and it didn’t go anywhere.”

However, it was enough to spark Melody to create more.

“I’m So Happy Just to be Here with You, Me and My Sequined Shoes Are Happy Too,” was her first VideoFact-funded single and Melleny Melody and the Syncopated Symphonies of John Henry Nyenhuis in 1994 – an album she describes as “big band cartoon music” –  was her first long player.

“Everything was all blending together. But I always had a huge passion for dance music.”

After teaming up with ex-Look People frontman (and current JazzFM radio personality) Jaymz Bee and delving into cocktail music, she formed her first label, Nepotism, with Bee.

“Our motto was ‘Family, friends or fuck-off,’ she laughs.

“His stuff was a little more cocktail and more jazz, my stuff was more cartoonish: a cross between Marilyn Monroe, Shirley Temple and Betty Boop on acid,” she declares.

“I figured they had to be remixed as dance tracks,” she recalls. “I’d been speaking to Pete Jarvis (DJ Peace Harvest). He had all kinds of connections to England and Ninja Tunes. He could remix.”

Melody and Jarvis flew to MIDEM in 1996 to sell their music, and as a result formed two record companies – Play Records and Gay Records, the latter releasing the album Melleny Melody & The Pop Machine.

At the beginning, Play Records exclusively released vinyl. The house music compilation Floorplay, manufactured by Acme Vinyl, was one of the label’s first releases.

“We did some performances at MIDEM in a little nightclub,” recalls Melody.

She also applied her marketing skills to the label.

“I knew how to get us into studios, and once the music was done, how to market it and get it out there,” explains Melody, who also earned a 2008 Dance Recording of the Year Juno Award nomination for Melleefresh vs. Deadmau5 “Afterhours,” and a turntable hit in the U.K. with the Hoxton Whores called “Let’s Get Dirty.”

“Because it’s not like I’ve ever had a Universal or a Sony or a BMG or anybody giving me money to market my stuff.”

By this juncture, Melody the recording artist had become Melleefresh, a pet name given to her by Alphonse Lanza (Alixander III), who later departed to form Azari & III.

In 2004, Melody and Play Deep President Brown-Smith co-owned an in-house studio and that’s where she first collaborated with Joel “Deadmau5” Zimmerman.

“Carole Pope had put out a record called Transcend and okayed me to do a remix album called Transcend – The Remixes,” Melody recalls. “I got DJ Iain (McPherson) to help select people and he found Joel.

“Joel’s remix of ‘Americana’ was kind of like ‘Faxing Berlin:’ It was very prolonged. Ian said ‘it isn’t super ‘dancy,’ but I liked it.”

Zimmerman then showed up at Melody’s doorstep and they became “fast friends.”

“I really loved it and sent it to my friend Johnny Williams who worked with (trance DJ) Dave Pearce at NuLlfe (Records).  Williams gave the track to influential DJs and radio personalities Pete Tong and Judge Jules, scoring substantial BBC Radio airplay for most of 2006.”

“That’s where we put out the first stuff that Deadmau5 and I did together, recording in my husband’s woodshop studio,” she laughs. “That’s where we did ‘Afterhours’ and ‘Hey Baby.’ We had remote cameras set up in the woodshop.”

The arrival of Beatport, the Denver, Colorado-based electronic music retailer, specializing in EDM and dance music, was a godsend to Play Records’ commercial success.

“When Beatport came out, it made things so much easier to get your music out to the world,” said Melody, whose label joined the service in 2006. “When the Internet started, that was a huge opening for independent labels. If you were there at the time and you had music ready to go, it was a totally awesome way of doing it.”

Play Records was also offering a new musical niche with the work of Deadmau5.

“When Joel came out on board, we ended up doing electro and nobody else was doing that kind of music,” she says. “Joel’s also really savvy with I.T.,so he helped me to load tracks up to Beatport.

“The whole Beatport thing totally took off. The music sold like crazy.  I made a lot of money for the first time in a long time. We were the top label selling music.”

The dual U.K.-Canadian citizenship because of her marriage to Clive Smith opened doors to doing booming business across the Atlantic.

“I think the center of the universe for most of this music is the U.K.,” says Melody. “We’re working with a lot of U.K. talent. We made vinyl in England years ago. We had a really good relationship with Prime Directive Distribution, and now my distributor Labelworx and my publisher Bucks Music Group – they’re in England.”

A trip to Amsterdam in 2009 with her son Zach inadvertently planted the seeds for Play Deep.

“When we returned to England, Zach thought that he would like to stay,” Melody recalls. “So he stayed and found a building that was grungy, but he rented it for a couple of years.

“But we found renting in England so expensive that it’s just stupid. So we had a few bucks and thought, ‘why not buy a building?'”

Officially open for just over a year, Play Deep (see separate story) has been building a substantial buzz with heavy duty clients and Melleefresh herself has taken advantage of the digs, recently recording a track with The Real Dosage (Dayne Jordan) and DJ Ferno.

“It’s a word-of- mouth thing more than anything,” she asserts. “And with the Spice Girls tweeting in the studio on lockdown for 48 hours, that started a chain reaction with a whole bunch of other stuff. That type of publicity you can’t even buy.”

Legal issuers surfaced for the label last year. On October 26, 2015, Joel Zimmerman, a.k.a., Deadmau5, filed a lawsuit against Play Records Inc., for tens of millions of dollars in damages over what he claimed to be unauthorized remixes and mashups.

Melody says the whole thing was a misunderstanding.

“He had an issue with a remix that I released that another writer had written – old tracks that me and Dirty 30 (Alixander III of Azari and III) had done. We had also done a few new tracks together, so I had promoted this album called Secretsthat included a couple of remixes that Joel had done, which I had paid for, in 2005.”

She said that a writer had erroneously reported that the project had included new DeadMau5 material, putting the EDM superstar “into a tizzy” for “wrongly promoting his music.”

In May, an agreement was reached, with Melody saying that, moving forward, she will not create any remixes of Deadmau5 material.

Melleefresh’s latest project is a video collaboration with Boy Pussy called “Yummy” and “Work My Body” as well as NHB’s “Bad Boy.”

“I was just in the studio with this new Toronto duo called Cuetwo and Tarquin Richards, who self-produced an album that’s now on iTunes,” says Melody.

For Play Records’ 20th year, Melody and VP Zach-Brown-Smith is reviving and re-releasing some of the early vinyl-only tracks to digital.

With European distribution provided by Labelworx and over 1000 tracks in circulation, Melody is constantly scouring for fresh talent as she continues to wave the Play Records flag.

“You’re as good as your last song. So you have to keep your presence out there as much as possible. And it’s house music – so it never goes out of fashion.”