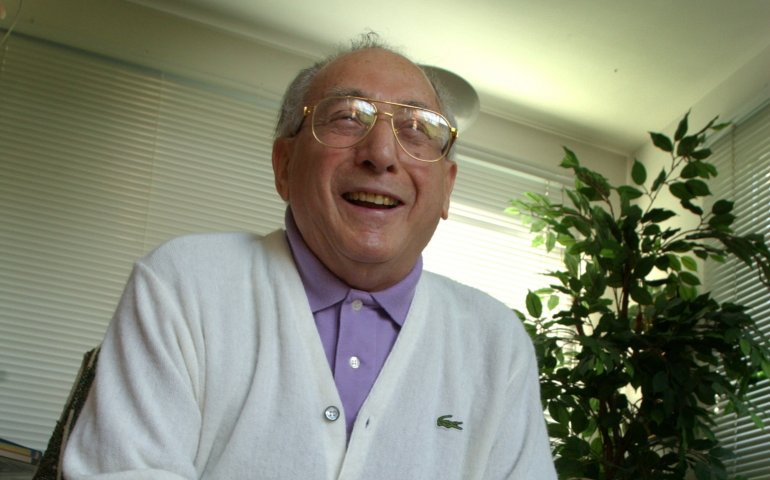 Elvis Presley’s “Colonel” may be long gone, but at the age of 99, Canada’s Colonel is still with us, as sharp as ever.

Harold Kudlats (the true spelling of his name, although he represented himself professionally as ‘Kudlets’) may not have lucked out in terms of shepherding the superstar careers that the notorious Colonel Tom Parker was responsible for at one time or another (Eddy Arnold, Hank Snow, and of course, Elvis), but he played prominent roles in the careers of Conway Twitty, Ronnie Hawkins and, later, The Band.

FYIMusicNews recently tracked Kudlats down and visited him at Shalom Village, a non-profit residential home. Although suffering from ill health and hooked up to a ventilator, Kudlats consented to a brief interview to recall moments of his amazing career, which ended with retirement in the late 1980s, and for which he received a Lifetime Achievement Award from the Hamilton Music Awards in 2006.

More an agent than manager, Kudlats’ introduction to show business was anything but planned.

Born in Glasgow, Scotland, Kudlats’ family emigrated to Canada when he was 8 and settled in Hamilton. After graduating from Westdale Collegiate (future alumni included Martin Short, hockey Hall-of-Famer Harry Howell, Lt. Governor Lincoln Alexander and Kudlats’ nephew, Eugene Levy), he worked briefly at Stelco before venturing out on his own.

He briefly opened a hot dog stand, and then booked appearances by the Negro Baseball League.

“I started back in the 40s,” he reminisced. “Back then we all used to try to hustle for a dollar. Tried everything. And I remember, first I opened a hot dog stand at the Windermere cutoff at the beach here. And my buddy Bill Hutchinson, at the same time, he came out of the Air Force and he opened his place about a mile down the beach in Burlington. Hutch’s is still going today.

“Then I used to bring in the Negro Baseball League. Back then, they weren’t allowed in the majors. I used to bring in the coloured teams – the Cleveland Buckeyes, The Kansas City Monarchs, dozens of them, and the best pitcher of all time was a black man – God, I’m trying to think of his name – but I played them all at the old Scott Park on Cannon Street. I don’t even think the newspapers covered it.”

He was managing The Forum Palace roller rink, capacity 3500-4000, on Barton Street, when he was approached by two men who had booked the venue for a big band concert.

“These fellas came in with signs telling me that the Glenn Miller Band (led by Miller tenor saxophonist Tex Beneke) will be playing at my roller rink on a certain date,” Kudlats recalls.

“I knew nothing about it. I didn’t want to give up the roller rink, so they said, ‘Look, take the contract if you want it, and we’ll buy out.’ So they did, and that’s how I started, with the Glenn Miller Band in 1947. I got into it by accident.”

After the success of the Miller gig, Kudlats found himself bitten by the showbiz bug.

“I enjoyed the action, and I used to charge $1 in advance, $1.25 at the door. The second band was Tony Pastor and he had two young sisters, first time on the road, Rosemary Clooney and her sister Betty. And of course, after that it went on – Louis Armstrong, Benny Goodman, Tommy Dorsey – all the bands.”

When he says “all the bands,” he wasn’t joking: Duke Ellington opened the Dundas Arena for him in 1951, and other acts that made their way through Hamilton due to Kudlats’ acumen included Stan Kenton, Harry James, Gene Krupa, Billie Holiday, R&B singers Nat King Cole and Ben E. King and rock acts Bill Haley & the Comets and Chubby Checker.

Kudlats’ Hamilton domain included a thriving club scene ranging from The Flamingo, to the Golden Rail Tavern on the corner of King and John Streets, to Fischer’s Hotel and the four-storey Grange, located at 25-27 King St. W, one of the first recipients of a liquor licence.

But Kudlats’ life changed most dramatically when Harold Jenkins, known then as Conway Twitty, metaphorically arrived on his doorstep.

“Conway was playing in Washington, and his manager called me and told me that he’s booked into the wrong type of room and can I help him out and book him in Canada?” Kudlats recalls.

“I booked him into the Flamingo (Lounge, the site now occupied by Hamilton Place) in 1957 (for $375, he told the Hamilton Spectator’s Jeff Mahoney in 2015.) I changed his life, and he changed my life. He went on to be a superstar, and by that time, I had the Harold Kudlets Agency.”

Specifically, Twitty and his drummer Jack Nance had composed “It’s Only Make Believe,” the singer’s first No. 1 Billboard hit, while living on Herkimer Street. As public demand rose, Twitty was forced to leave his Canadian commitments.

“I asked, ‘Conway, are there any more acts like this back in Arkansas?’ He recommended Ronnie Hawkins. And I brought Hawkins up in 1958, and he’s still here today.”

At the Connaught Hotel circa 1960s
When he first set eyes on Hawkins, who christened Kudlats as “The Colonel,” the impresario remembered him as “an exciting act. He’d do backflips – it was an exciting show. Plus the fact it was a type of music that people hadn’t heard before – rockabilly, you know.”

Accompanying Hawkins from Arkansas was drummer Levon Helm, who in a 1974 interview with Bruce Springsteen drummer Max Weinberg, said his backing band was comprised of mainly U.S. musicians.

“Ronnie Hawkins and Jimmy Ray Paulman — the guitar player who played with Conway Twitty — started the Hawks; they got Will Pop Jones, who was Jimmy Ray’s cousin, but there was nobody around Helena and Marvel who could play the drums,” Helm told Weinberg.

“I started playing with Hawkins when I was in high school. When I got out of high school, we took off, playing distant points. We’d drive two hundred or three hundred miles to play dances. We got hooked up with the Colonel through Conway Twitty. You see, the Colonel at that time had all that territory — Southern Ontario, Quebec, and places along the Canadian border like Detroit, Cleveland, and Buffalo.

“So, through Conway Twitty he brought up Southern rock & roll groups to play Canada and those parts, and he would take the musicians from Ontario and send them down South to play. There was always that kind of interchange, and it worked.

“Gradually, Jimmy Ray and the Arkansas players were replaced by the guys who became The Band,” said Helm, referring to the Canadian squad of Robbie Robertson, Rick Danko, Richard Manuel and Garth Hudson.

Kudlats recalls that The Hawks “started with me in 1958.”

From his Harold Kudlets Agency suites – 824 and 825 – at the Sheridan-Connaught, now the Royal Connaught Hotel in downtown Hamilton, Kudlats booked Hawkins and The Hawks throughout Canada and the Eastern US.

Twitty continued to be Kudlats’ biggest meal ticket. “Conway was drawing gangbuster business at the Flamingo,” says Kudlats. “Word spread through Ontario, so other bands wanted to come with the agency, and it opened a lot of doors.”

“There wasn’t a lot of clubs – one or two in most cities,” he remembers. “I used to book and push the Canadian musicians, because the Americans had cocktail bars for years and most of their clubs had American acts. I used to book the Peppermint Lounge in New York, the home of ‘The Twist,’ and most of the bands there were the Canadian bands. Las Vegas (The Freemont Hotel,) New York (the Peppermint Lounge,) San Francisco, Hawaii, Japan – all over the world.

His association with Ronnie Hawkins, however, didn’t last. After Kudlats helped Hawkins secure a record deal with Roulette Records, the performer gave the agent his walking papers.

A few weeks later in 1963, the band later to be known as Levon and the Hawks were waiting for Kudlats one morning, told him they were splitting from Hawkins and asked if he would represent them.

Kudlats agreed and booked Levon and The Hawks steadily, including the gig at Tony’s Mart in Somers Point, New Jersey, where Bob Dylan, on the advice of Albert Grossman secretary Mary Martin, first connected with the group that was shortly thereafter renamed The Band.

“Albert Grossman had a secretary from Canada and she knew the boys. When I booked them into Tony Mart’s, he connected with them there and they stayed with him for a couple of years.”

Kudlats says it was his reputation that helped him develop his worldwide network of contacts. “I had a good reputation in the business. And I had an honest reputation. In fact, Matt Lucas, a rock star of the ’60s, he’s still going today, Matt often used to say, ‘Harold Kudlets was the only honest agent in the business,’ because it is a cut-throat business.”

Kudlats, who booked 30 to 40 acts weekly, said the agency got around it by presenting its artists as tourists. “They would go across with no instruments, and rent the instruments when they got on the other side.

Kudlats also says that having a record deal was key in achieving cross-border bookings. “Most of my bands didn’t have a record, including Hawkins,” he notes. “But they were never, ever out of work, unless they wanted to be.”

The Colonel says the biggest thrill he received was when he attended his clients’ shows. “I used to stand in the wings of a performance, and I used to think, ‘Here I am, listening to the best music and the music that I love, and getting paid for it.’ It was something I really enjoyed.'”

His most memorable night when he booked Jack Benny into Maple Leaf Gardens. “Jack Benny stood on the stage at Maple Leaf Gardens and he pointed up to the ceiling, and he said, ‘I see an empty chair up there. I’ll have to have a talk with Harold Kudlats.’ He was a nice man.”

He also coordinated The Band’s reunion tour when they decided to carry on in 1984 without Robertson, and promptly retired at the conclusion of the group’s Japanese leg.

“My nephew, Eugene Levy, he bumped into Robbie about three months ago,” says Kudlats as an aside. “Robbie was surprised that I’m still alive.”

Some of the other acts Kudlats has been involved with over the years include Tiny Tim, stripper Chesty Morgan, “Some Kind of Wonderful” songwriter John Ellison and The Count Four, sporting drummer and future RCA Canada president Ed Preston.

And the most important part of his legacy? “That I helped a lot of entertainers get their first step up the ladder of success. I don’t know how many I had the privilege of helping, and they could never say one word against Harold Kudlats. My reputation was A-1.”

Looking back over the years, Harold Kudlats – who turns 100 on November 9 – says he’s experienced a full and fulfilling career with few regrets.

“I couldn’t ask for anything more,” he says.