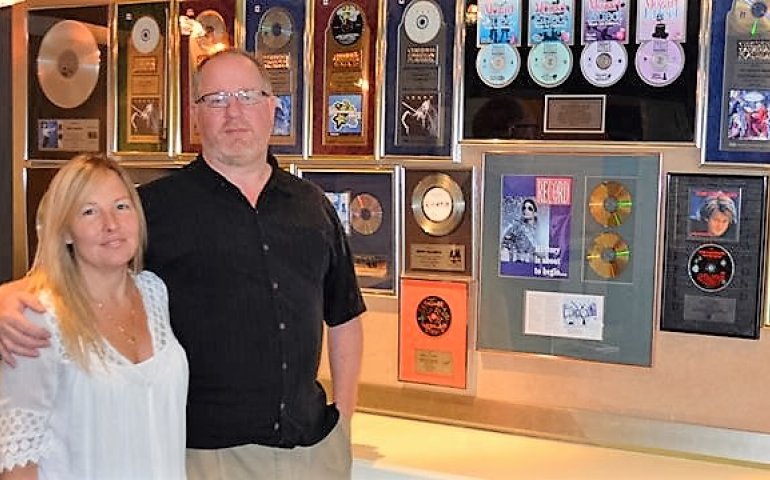 The Kulawicks, Brooke and Geoff

True North is stretching its wings again – this time into the world of fine art.

Red Canoe by Kurt SwinghammerLocated adjacent to the True North Griffin House label office in Waterdown, Ontario, about 10 minutes north of Hamilton and just under an hour west from Toronto, the new gallery is the latest offshoot of the storied enterprise first founded by in 1969 Bernie Finkelstein as a home to recording artists Bruce Cockburn and Murray McLauchlan, one that, since its purchase by the Kulawicks partnered  with numerous investors in 2007, has expanded beyond the confines of a record company to include an agency, festival curation and merchandising.

For this latest venture, which featured an arts conversation between the Academy- Award–and-Polaris-Prize-winning legend Buffy Sainte-Marie and Juno-Award-winning legend Murray McLauchlan – both True North artists – and full-house attendance by such music industry luminaries as Frank Davies, Ron Sexsmith, Joanne Smale, Jane Bunnett, Denise Donlon, and Kurt Swinghammer to name a few, the Kulawicks said a natural love of visual creation led to the birth of this new business.

“My wife and my daughter are artists, and they’re always inspired to create art,” Geoff Kulawick explained. “We bought this building and had some additional space, and Brooke had the idea,

Jackie Wilson by Michael Jackson‘why don’t we use that space for a gallery for musicians who do art?’ Buffy Sainte-Marie and Murray McLauchlan are visual artists, so she came up with the inspired idea. I did some research and the more research I did, the more it sounded like something brilliant that nobody else is doing. There’s no other gallery out there that’s dedicated to visual art by musicians.”

For her part, Brooke Kulawick said she was sparked by a gift of art from one of their signings, Nova Scotia fiddler extraordinaire Ashley MacIsaac.

“He had sent us a painting and you could tell he was really going through a dark period,” Brooke recalls. “It was a beautiful piece, and it made me realize that a lot of musicians are so talented for things other than their music that they’re not really known for. I thought, ‘how can we show them off?’ Then I saw Buffy’s art and I thought, ‘why not create a space that also represented them as visual artists?’”

The Kulawicks spent a year or two gathering inventory and decided the time was ripe to dive in.

“There are a lot of people who are connected to artists in a deeply, emotional way, who want one of a kind, original pieces, not things that are reproductions or commodities, but things that nobody else has. Those people are willing to pay for a connection to the artist that inspires them,” says Geoff.

“Once I realized that I could get enough artists to commission their artwork, then it made a lot of sense to go for it. So we think it’s a great business – we love art, we love music. We’re going to take a run at it.”

The inventory came from a number of places – auctions, artists, private collectors and artist managers, whom Geoff Kulawick reported were thrilled to be included.

“I reached out to Graham Nash’s manager and she was very enthusiastic,” he notes. “She helped arrange to get us five works of Graham’s that are on display. And Graham will be coming to the Gallery in August to play a few songs.”

Louie Perez (Los Lobos) and Joseph Arthur are also scheduled for visits in the not-too-distant future.

Although the Kulawicks are unwilling to disclose how much of an investment their latest venture commanded, the range of art currently available for purchase ranges from a $2000.00 to $25,000 price tag.

That said, there are some pieces – such as a John Lennon print from his Bed-In days in Montreal – that are from the Kulawicks’ private collection and are for display only.

“We bought the Lennon Bed In For Peace at auction, and when it arrived, our framer found an illustration on the back that Lennon did when he was signing the prints,” Geoff relates. “So surprise – we actually have an original Lennon thanks to a doodle.”

The Gallery of friends: Ian Thomas, Denise Donlon, Murray McLauchlan and friends
whoop it up knowing this is art that won’t be streamed on Spotify.Geoff Kulawick says it’s True North’s intent to “grow it into a real business, acquire inventory, represent the artists on the visual side and open markets for them, dealing globally in selling their art.”

He says artist reaction so far has been favourable, and selling five pieces at the opening is an encouraging start.

“We’ll be trying to secure inventory from artists that we’re having success with, and hopefully on an exclusive basis,” he hopes. “But we need to prove ourselves before we can start locking people down to exclusive representation.

“We have original works – you can only get them here – so that’s a great way to start. Once we can demonstrate that we can sell their work, I’m sure we’ll be able to do more.”

The True North Gallery – Music Gallery Of Fine Art will be open to the public during the summer for yet-to-be-determined dates, but private viewings by appointment will be year-round. For more information, call 905-690-9397.