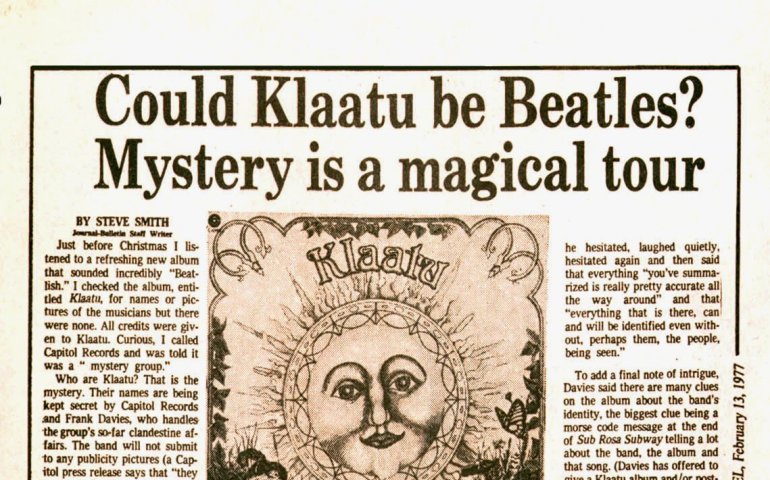 Today, Conveyor Canada releases a re-mastered 40th anniversary edition of Klaatu’s 3:47 E.S.T.. It is a classic album that has had its share of controversy. Nick Krewen separates the facts from the myths and talks with some of its principals in a yesterday and today FYI feature. As an aside, like so many inaccurate accounts about this band, the actual 40th milepost falls next August, but facts always seemed to be misrepresented when the name Klaatu gets mentioned. It’s a classic story about a marketing plan (or lack thereof) gone awry.

As did the trio’s brilliant symphonic rock project, collectively recorded under the name of Klaatu, a popular alien emissary depicted by actor Michael Rennie in the 1951 sci-fi cult classic The Day The Earth Stood Still.

Despite the fact that the album (known as 3:47 E.S.T. here in Canada, but as Klaatu in the U.S.) contained a number of radio-friendly and critically-acclaimed nuggets such as “True Life Hero”, the Beach Boy-ish “California Jam”, and its signature anthem “Calling Occupants of Interplanetary Craft” (later constructed into a No. 1 chart-topper in Ireland, a Top 10 UK hit, Canadian smash and a Top 40 chart song by — of all people — The Carpenters), the band’s policy of “no interviews, no publicity, no I.D” seemed destined to ensure that 3:47 E.S.T. would also remain…obscure.

“We wanted the music to be the focus without anyone knowing who we were,” said Woloschuk, who landed the project at Toronto Sound, the Thorncliffe Park, Toronto-based studio owned and operated by Terry Brown and Doug Riley, after he applied to be an assistant engineer.

He played Brown some demos co-authored with Dino Tome (credited on a few Klaatu singles as “Chip Dale”) and impressed him enough that the Rush producer offered Woloschuk and Long free studio downtime to record their songs (Draper was added to the mix a short time later).

Thus began the production of a three-year, eight-song labour of love; one that progressed, after the initial release of a couple of singles on GRT Canada, “Hanus Of Uranus” (the first word of its title later shortened to a part of the anatomy that doesn’t begin with “H”) and “Doctor Marvello”, the latter catching the ear of Daffodil Records owner Frank Davies.

Davies loved the music to the point where he took the album to Capitol Records A&R head Rupert Perry, who also loved what he heard. To Davies’ credit, he convinced Perry to sign Klaatu without seeing them perform or even knowing who they were; and to Perry’s credit, he actually committed his John Hancock to the contract.

It could have ended there, had not Capitol singled out a February 1977 column by Steve Smith, rock critic with the Rhode Island-based Providence Journal, who surmised that possibly…Klaatu was a pseudonym for a secretly-reformed John, Paul, George and Ringo project.

Contacted earlier this week, Smith – who is in his 46th year of working for the Providence Journal – says he’s still surprised about the uproar his printed words caused.

“I wasn’t the first person who said some of the things I said,” Smith told FYI.

“Why Capitol Records took my article and ran with it, I have no idea. I figured that maybe the album wasn’t selling that well. But that changed.”

Did it ever: suddenly, in this pre-Internet era rumour mill, copies of the album flew off the shelves. Was Klaatu comprised of the Beatles actually working incognito? Certainly the numerous influences and tones of songs like “Sub Rosa Subway” fueled speculation.

“This first album did sound like the Beatles,” maintains Smith nearly four decades later. “There were a couple of things that could have thrown you a little bit, but for the most part, it did.”

As Klaatu band members, who were busily working in London trying to adhere to a Capitol deadline of handing in their sophomore effort Hope, refused to confirm, deny, or even acknowledge the controversy, Klaatu the album sold more than 500,000 copies in the US and another 50,000 in Canada.

The trend may have continued even longer, if not derailed and deflated a few months later by WWDC-FM program director Dwight Douglas. The Washington radio exec visited the Library of Congress, discovered the band’s registered songwriter names at the copyright office, and publicly outed them.

The press never forgave Klaatu for the perceived slight, and record sales were never as healthy again. Four more albums were released, the band was finally forced to tour (opening for Prism) and the Capitol years abruptly came to an end.

Today, John Woloschuk is a Toronto-based chartered accountant, while Dee Long is an engineer/musician who has released six albums, lives in B.C. and ended up, ironically, working for George Martin, the fifth Beatle, at London Air Studios. Terry Draper lives outside of Toronto and is about to release his latest album, Searching.

As for Steve Smith – aside from the gold records he received from Capitol Records Canada and the Australian record company for his role in spurring sales of 3:47 E.S.T. – he says, “My life didn’t change in any other way.”

And if he wants to forget the incident – not that he does – history won’t let him.

“It craps up its ugly head about every 10 years,” he laughs.

– Acknowledgment: Nick Krewen was approached independently by FYI to write this story. An essay about the group, written by him, appears in the 40th anniversary edition of 3:47 E.S.T.