If necessity is the mother of invention, someone forgot to tell that to my cat.

Morning after morning it’s the same routine for an animal that God really should have gifted with opposable thumbs: at some ungodly hour before the sun has begun its daily ritual of illuminating the horizon, there’s a stir on the bed and my netherworld-waking eyelids flutter, then open wide as I see these two intensely growing green saucers staring at me from less than a half-inch away, wondering where the hell their breakfast is and why I haven’t tended to it yet.

As I arise in my zombie-like state and begin to shuffle towards the kitchen in full automaton mode – seriously, my impression of the living dead at that moment, complete with grunting and drooling, is so spot-on that I’m thankful nobody is around to witness it, and especially no-one with an axe to grind, so to speak  — my feline friend, trailing obediently behind me, then further tests my mental faculties by cutting in front of me just as I reach the top of the stairs to descend to said kitchen.

At this point, I’m not sure if she’s really that hungry, or just after the insurance.

After she’s fed and watered, my cat then decides its time to gloat about the fact she was able to rouse the ugly bag of mostly water from his sound sleep by yowling at the top of her lungs, and then suddenly scampering around the house and by sheer acceleration alone, recreating her own version of the Pamplona Running Of The Bulls, thus stirring anyone else that still held out hope for some solid slumber. 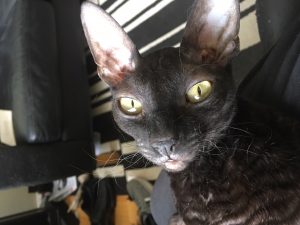 Because cats are creatures of habit, this little scenario plays itself out more often than a worn out copy of Groundhog Day, different only in that you feel more powerless to change that pattern of behaviour because, frankly, they have a mind of their own.

This is where telepathy would come in handy: wouldn’t it be great if you could read the mind of your pet?  Wouldn’t be even better if someone could invent a device that would alter the behaviour of your pet? (I’m not talking shock collars, electric leashes or fences or anything else that forces change in a way that is cruel, perish the thought).

The Doolittlean contraption I’m imagining would compel a switch simply by way of psychically tapping into their walnut-size brains and either explaining or strongly suggesting the pre-breakfast rite benefits of not sitting on Dad’s face or lightly nipping his nose.

At the very least, this gadget might deliver some invaluable insight into the reasons or motivations behind these actions of your unwanted extended quadra-pawed family (no, I’m not talking about your weird Uncle Richard).

An aside: telepathy or no, I’m pretty certain that famed cartoonist Gary Larson got it spot-on when he depicted the mental capacity of blank-faced, droopy-tongued, floppy-eared canines by adorning them with propeller beanies.

But the reason I bring this up is because the theme of this issue of Niagara is innovation, loosely translating into invention, and we as Canadians have been responsible for concocting some absolutely fabulous items and activities that have been amazingly successful: 5-pin bowling (T.E. Ryan, Toronto, 1909); the CPR Mannequin (Dianne Croteau, Sudbury/Toronto, 1989); instant mashed potatoes (Edward A. Asselbergs, Ottawa 1962); Trivial Pursuit (Welland-born Chris Haney & Scott Abbott, Montreal, 1979) and the zipper manufacturing machine (Gideon Sundback, 1913), the latter which was introduced here in St. Catharines at the Lightning Fastener Company, on Niagara Street.

Of course, Niagara Falls hosts one of the greatest inventions of all time, initially constructed in 1895: the first AC power plant as developed by Nikola Tesla – the man who also coincidentally created the radio. If you’re wondering what inspired the elaborate water-draining sculpture that goes off every hour or so near the lobby of the Fallsview Casino, Tesla is the guy being honoured…although I’m not sure whether he was more accomplished in poker or blackjack.

Either way, if he were alive today, I’m sure Tesla would get a “charge” out of the splashy tribute (Heh heh, just a little electrifying humour there folks. I’m here all week; try the veal!)

Of course, for every piece of ingenuity that impacts our lives and changes our world for the better, there are those that fall flat due to miscalculations, sudden technological shifts, concept shortfalls and, let’s be honest here, plain old stupidity.

These are the brainchildren that should have never left the gate – the ones that prompt you to scratch your head and ask, “What in tarnation were they thinking?”

The best example is the legendary “parachute jacket” designed by German inventor and tailor Franz Reichelt.

I guess Reichelt, that ol’ romantic smoothie, figured that the surefire way to impress your girl on a first date was to climb the nearest high-altitude precipice, leap off the ledge and, as you float gently to the Earth after said parachute deploys, spew amorous couplets of poetry while the object of your affection swoons and faints.

Or maybe he was just nuts. We’ll never know: There’s a YouTube video of Reichelt shot in 1912, standing on a ledge at the Eiffel Tower in Paris and wearing his patented jacket with a camel-like hump behind his head. Unfortunately, his leap of faith fell flat.

Aside from inventors like Reichelt leaving a lasting impression, there are products today that frankly should have never been issued patents, like Ron Popeil’s Hair In A Can.

Hair in a can?  Buddy, if you don’t think that people can tell you’ve just spray-painted your head to compensate for your comb-over, then your problems run much deeper than follicle challenge.

On second thought, after describing some of the atrocities above, maybe it’s better that nobody has yet created the Doolittlean contraption I’d mentioned earlier.

Knowing my luck, my scheming cat would end up reading my thoughts as well and formulate her own bright ideas.

Then I’d really be in trouble.