Postmodern Jukebox turns back the clock on pop hits

Scott Bradlee and his rotating cast of singers and musicians redo current songs — from Radiohead to Katy Perry — for a bygone era.

No, we’re not talking about James Bond martinis, but the entertaining and imaginatively radical rearrangements of prevailing pop, rock and rap classics by New Jersey-raised pianist Scott Bradlee and musical combo Postmodern Jukebox, appearing at Massey Hall on Monday. 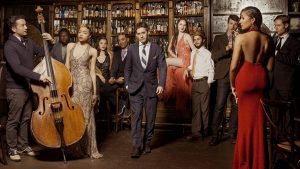 Scott Bradlee and his Postmodern Jukebox

Musically speaking, Bradlee applies the same principle to his renditions of famous tunes that 007 does to his celebrated drink: throws all the ingredients into a metaphorical tumbler, tosses them into a bygone era, and then serves them up with a rotating cast of 60 singers and musicians, ranging from American Idol finalists Haley Reinhart and Casey Abrams to Puddles, a six-foot-eight baritone cabaret singer in full clown costume.

Imagine Nicki Minaj’s “Anaconda” rearranged as a breathless, banjo-infested ragtime-era hoedown, or Miley Cyrus’ “We Can’t Stop” reworked as a ’50s doo-wop number. Sometimes Bradlee switches up time signatures or inserts a few bars of another tune in the middle of a song, as he did with Wham!’s “Careless Whisper,” speeding up its tempo and briefly detouring into Dave Brubeck’s “Take Five” and “Message In a Bottle” by the Police.

You can hear and see them — along with 159 other revamped tunes — on Bradlee’s Postmodern Jukebox YouTube channel, which boasts 1.6 million subscribers and is updated Thursdays.

“Basically, the process involves picking out a song for its lyrics,” Bradlee explains. “I pick apart the lyrics and the structure of the song to see if there’s anything that would suggest it being recorded in an earlier era.

“For instance, ‘My Heart Will Go On,’ everybody knows it from the movie Titanic; it’s a Céline Dion song. But if you look at the lyrics, it’s essentially a ’50s song: it has that flowery language of “my heart will go on” and that’s something you can definitely hear sung by somebody like Jackie Wilson.
“So you’re hearing something familiar in a completely different context and it still works.” 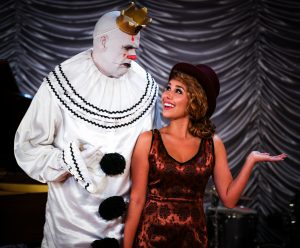 Bradlee admits that some songs have him stymied.

“We never did a cover of ‘Uptown Funk’ because it already has the classic feel of ’70s funk. Mark Ronson is such a brilliant producer and Bruno Mars is a great vocalist; how do you write something new with that? It’s already classic.”

For Massey Hall, the show will feature “four or five vocalists,” a horn section and a tap dancer.

“If you were to go back in time to the Golden Age of Hollywood and you’re going to a New Year’s Eve party, it’s the kind of party that Frank Sinatra would go to,” Bradlee says.

Postscript: Ironically, Scott Bradlee was the one person missing from the Postmodern Jukebox appearance at Massey Hall that featured Haley Reinhart, Casey Abrams and others. Franchise experimentation, perhaps?