Canadian rock star Bryan Adams says fans who like his music are going to love his new album, Get Up, “especially if you liked the stuff from the past.”

Get Up, the newly released 13th studio effort in the 100-million-record-selling Bryan Adams canon, contains 13 rock ’n’ roll songs that run a total of just over 36 minutes.

But four of those songs are acoustic retreads of the electric originals, so if you just count the nine primary numbers, the whole thing clocks in at 25 minutes.

“There’s no frills,” Adams, 55, the rock star and celebrity photographer recently acknowledged in a Shangri-La Hotel suite during a recent visit.
“I think that’s what’s kind of nice about this: it’s very direct, very concise and it’s a very quick record.” 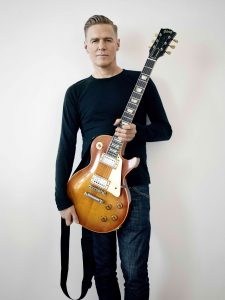 Adams also said, in this age of short attention spans, it’s an album that his record company felt it could handle.

“When I was getting to the point where I had enough songs, I called my record company and said, ‘Look, I think I’ve got an album here,’” he expounds. “One of my questions was, ‘How many songs do I need?’ And they came back and said, ‘Don’t give us a lot of music, because we can’t do anything with that. We wouldn’t be able to do a lot with a lot of songs. But if you give us a really succinct record, we’ll be able to do something.’

Helping Adams realize that artistic vision was Jeff Lynne, who is reviving his own Electric Light Orchestra with a Nov. 13 album called Alone in the Universe.

Lynne, who has produced hit albums for George Harrison, Tom Petty, Paul McCartney, the Traveling Wilburys (of which he was a member) and others, helped Adams craft a catchy, fun, hook-filled album that is full of radio-friendly rock. Most of the songs hover around the two-and-a-half-minute mark.

“He has great understanding about rock music,” said Adams, a Kingston, Ont. native, smartly but casually dressed in a custom-tailored crimson dress shirt and blue jeans.

“When you make a great record, it’s kind of a three-tier process. The first is the writing of the song, the second is the demo and the third is making a record. And you hope with each level of that process that it gets better.

“Whenever I made a demo with (Bob) Clearmountain (producer of Adams’ breakthrough albums Cuts Like a Knife, Reckless and Into the Fire), the level was, ‘That’s where we are now and if it isn’t better than the demo, we’ve got to go back to the demo and figure out what it was.’
“So we’d chase that a bit. And we always made it better, which was good.
“In the case with Jeff, it was exactly that: I would send a demo; Jeff would send it back as a record. I mean, he totally got it on every single level. On my vocal. The placement of my mixes, everything.”

In fact, Adams goes on to say that Get Up is an album he wished he made 25 years ago.

“When I think about the trilogy of You Want It, You Got It, Cuts Like a Knife and Reckless, those records have a real unity to them. These songs could have been on the same record. I feel I could have slotted this album in right after Reckless.”

Contributing to that particular sonic unity is the re-emergence on Get Up of Vancouver-based Jim Vallance as Adams’ chief songwriting partner.

The duo was responsible for such time-honoured Adams classics as “Summer of ’69,” “Run To You,” “Heaven” and “Cuts Like a Knife” before taking a break following 1987’s Into the Fire.

“We’ve been working quite hard over the last five or six years on songs,” Adams notes. “It’s taken us a couple of years to get back up to speed and it feels really natural.”

Adams wasn’t even considering making an album until the duo submitted a track to Lynne.

“When Jeff came along and asked me if I wanted to cut a track, we got it back and I said to Jim, ‘Do you think we’ve got something here?’ He replied, ‘I think we really do.’ We sent another song and, suddenly, everything started to come together. There was a focus: this is where we’re going.”

The 19-time Juno Award winner and Canadian Music Hall of Fame member says he wanted to hire Lynne as a producer as far back as the 1999 song “The Best of Me.” Currently there no plans to work with him again, but Adams says he’d like to.

For the moment, Adams is enjoying the tail end of a busy two-year period that saw him release his cover songs album Tracks of My Years, the 30th anniversary edition of Reckless — the very first album by a Canadian artist to sell one million records in this country — and an anniversary world tour, as well as a book of portrait photography called Wounded: The Legacy of War (with journalist Caroline Froggatt) that benefited war veterans.

Now he’s planning to follow it up with a world tour to promote Get Up, and figures it should hit North America and Toronto sometime next spring or summer.

“It’s a very cohesive record and I know it’s going to be a lot of fun to play,” he says. “It’s definitely a band album. Fans who like my music are going to love this album a lot . . . especially if you liked the stuff from the past.

“If you like those old songs, you’re going to love this record. It feels modern to me. When you listen to a song like ‘That’s Rock N’ Roll,’ it sounds fresh to me.”

Bryan Adams slips back into the groove | Toronto Star