At 73 years old, the Beatles co-founder delivered a set that would leave younger musicians reaching for their water bottles.

Paul McCartney, 73, churned out an impressive 41 songs during a three-hour marathon at the Air Canada Centre on Saturday night, with nary a water bottle in sight.

To put this in perspective, most artists play between 18 and 25 songs over an evening concert. Sometimes, for extra-lengthy shows, the number may reach 32 to 34. And these artists often take sips from nearby water bottles, understandably, while performing under hot spotlights. 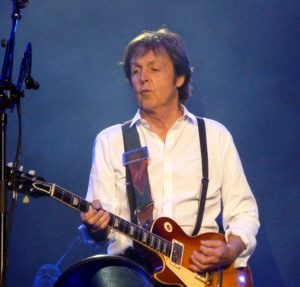 The co-founder of the Beatles, the most influential group in pop history, needed no refreshments, even after a fireball-laden rendition of the James Bond theme “Live And Let Die,” where there was so much pyrotechnic mayhem during the instrumental chaos that even the audience could easily feel the heat.

In a much chattier mood than the last time he was in Toronto, a jovial McCartney told a few interesting and amusing tales between numbers, joking around with the estimated 18,000 in attendance.

Playing his signature Hohner bass and launching with the Beatles classic “Eight Days A Week,” McCartney offered a fine selection of hits from both the Fab Four and the Wings as well as some obscurities and songs from his latest album, the aptly-named New.

Along with the expected favourites like “The Long And Winding Road,” “Lady Madonna” and “Let It Be” — each adhering to the original arrangements loved and cherished by so many — came a few surprises: “Let Me Roll It,” (which included an instrumental coda of Jimi Hendrix’s “Foxy Lady”) and “Nineteen Hundred and Eighty Five” from the Wings’ watershed Band On The Run, “One After 909,” “Another Girl” and “Helter Skelter” from the Beatles, and he dusted off “Mull of Kintyre” for all the Scots in the house complete with pipes and drums from the Paris-Port Dover pipe band.

If that wasn’t enough, McCartney, who still sings gloriously and is as adept on guitar and piano as he is on bass, performed the first half of George Harrison’s “Something” on a ukulele in tribute to his fallen comrade. He also paid tribute to John Lennon during “Here Today” (after a poignant version of “Blackbird”), calling the number written after Lennon’s assassination “the conversation I wished we had.”

“Here’s a song I wrote with Kanye West,” he announced, adding the slightly sarcastic quip, “That was fun.”

The highlights were many: the tender “My Valentine” he dedicated to his wife Nancy; “Maybe I’m Amazed,” dedicated to his late first wife Linda; the rocking party atmospheres of “Ob La Di, Ob La Da” and “Back In the U.S.S.R,” and even a false start on the newer “Temporary Secretary” were rendered with McCartney charm and precision.

By the time one of the most influential architects of pop music performed the sing-a-long “Hey Jude,” the concert had become an unabashed love-in between performer and audience.

In a week where Toronto is being spoiled by appearances by the two surviving Beatles — Ringo Starr is at Massey Hall on Tuesday — it is McCartney, concluding his show with the words “see you next time,” who will be the one to produce a concert five years from now as potent and as powerful as the spectacle just witnessed.

Nobody else can keep up with him.