Between her new solo album, her bands Trent Severn and Trapper, and her family, singer stays busy but focused.

Emm Gryner has become quite the proficient juggler.

A couple of weeks ago, the Juno-nominated, Sarnia-born singer and songwriter released her 16th studio album, 21st Century Ballads.

Gryner’s hosting a songwriting workshop at Sheridan College in Oakville during the Oct. 17 weekend and concurrently hops over to the annual Folk Music Ontario Conference in Toronto.

Throw in the occasional appearance with astronaut Chris Hadfield (Gryner guested on his space station-recorded cover of David Bowie’s “Space Oddity”); the writing and recording of an album with Trapper, the hard-rock quartet Gryner formed with guitarist Sean Kelly, her brother Frank, bass player Jordan Kern and drummer Tim Timleck; the running of her boutique label Dead Daisy Records and last, but certainly not least, family life (she’s the married mother of two). It makes you wonder: where does Gryner find the time?
“I just started a spreadsheet calendar,” she replied over the phone from Calgary, the day after a Trent Severn show. 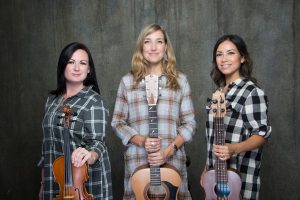 “It’s been about the only way I can keep track of stuff. I have a really hard time organizing my time.”

Finding and maintaining a life/art balance has been foremost on Gryner’s mind lately, a theme that permeates “The Race,” the opening track of 21st Century Ballads, and refers to the late 1999-2000 period she spent on the road playing keyboards with Bowie.

But the tune is actually about Lawrence Gowan, the Toronto-based artist whose solo career spawned hits like “A Criminal Mind” and “Moonlight Desires” before he replaced Dennis DeYoung in Styx as lead singer and keyboardist.

“It was the first song I wrote for the album because I joined his (Gowan’s) band for a week last year,” recalls Gryner, a multi-instrumentalist. “It was the most life-changing event for me.

“But what really inspired me is that I’m at a place in my life where I’m just amazed at anyone who’s a successful musician and who has kept their family together. Gowan is a total family man. It was really interesting to see the choices he’s made in his career to keep music and family. That’s what that song is really about.”

At 40, Gryner has been doing quite a bit of reflection herself and the voice-and-piano driven 21st Century Ballads is partially the result.

“Trying to find a balance as a woman in this stage of my life has been a challenge for me,” she admits. “So there are a lot of songs that I wrote to heal myself.

“I really wanted to write lyrics that are not watered down and you water things down when you start censoring yourself. I just tried to make sure that I put on the record what was happening in my life at the time the songs were written. I feel really good about it.”

Not all of the songs are personal.

“‘The Wild Weight of Earth’ was inspired by some of the stories of female teenagers committing suicide, which I think is so heartbreaking,” she explains.

“‘Duped’ is learning about someone you know being accused of criminal activity. The last one, ‘Visiting Hours’ is sort of a tribute to a fan of mine who passed away from cancer.

“They sound like a lot of depressing themes, but I think there’s a beautiful outcome from some of the sadness that we endure. I’m aware that this stuff goes on and I’m trying to focus on the light in the world.”

At the other end of the spectrum is the plaid-adorned Trent Severn, which — with harmony-honed, fiddle-laced folk tunes “Stealin’ Syrup,” “Haliburton High” and “King of the Background,” a tribute to late Band keyboardist Richard Manuel — sound more Canadian than back bacon, a toque and hockey put together.

“We want to highlight our shared experiences,” Gryner says on behalf of the band, booked for a Dec. 3 date at Hugh’s Room for a Trillium CD release party.
“It’s about the things that we all share: we all shovel our driveway . . . we all go to Tim Hortons once in awhile. Without going into novelty territory, which would be easy to do, we just try to think of the things that we love about Canada.”

Again, getting organized — especially after having kids — forced Gryner to sort out her priorities and to start compartmentalizing her sound to a degree.

“Having more projects keeps me focused on each one of them,” Gryner explains.

“With my solo stuff there was always a touch of country in them and a little bit of rock. I considered my previous albums to be stylistically schizophrenic.

“Once I got to put all the roots, country and folk style into Trent Severn, I was really able to focus on the classical element of my pop solo career. And then the Trapper thing, which is more of a fun thing, came along, but I’ve always loved rock music.

“It may seem that I’m really busy, and I guess that I am, but I take fewer gigs now and they seem to be more meaningful. I’m not getting on a plane to go play some little place that’s far, far away . . . I’m keeping it close to home.”

Be the first to comment on "Emm Gryner – musical multi-tasker"