The moment that Toronto electro band Austra completed its world tour to support its sophomore album, Olympia, its lead singer and songwriter Katie Stelmanis hit the books and began a voracious reading cycle.

“I had felt that music had consumed my life for the previous five years and I really just wanted to exercise other parts of my brain,” Stelmanis said last week in a phone interview. “So I really did get into reading, which doesn’t really sound like a big deal, but I hadn’t read a book since high school.

“I started making a list of all the books that I had read, because I was able to see this quantifiable gain in my smartness every time I read a book. I tried to read as many as possible.”

It wasn’t the only activity Stelmanis undertook during her performance hiatus, which officially ends this Friday with a Mod Club kickoff to a 53-date world tour that concludes in Brussels in April. There were French and Spanish language studies, ballet lessons and cooking as she moved from Montréal to New York to Mexico City before returning to Toronto. 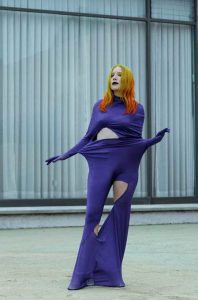 But the books she read directly informed much of the subject matter in the 11 songs on Austra’s third album, Future Politics, also out Friday.

Musically, it’s an album full of nuanced, throbbing synthesizers, brisk dance rhythms and Stelmanis’s angelic, operatic-inspired warbling. Lyrically, it’s a big-picture observation of social concerns ranging from capitalism to the environment, mentioned in such songs as “Future Politics,” “Utopia,” “Gaia,” “Freepower” and “Beyond a Mortal.”

“It was the culmination of a few years of basically reading stuff,” Stelmanis explains. “The first book that got me into all these subjects was the Naomi Klein book This Changes Everything and that kind of inspired me to read more about neo-liberalism. I got really into reading David Harvey and his books A Brief History of Neo-Liberalism and Rebel Cities, and from there it just seemed to me like the major problems in the environment were in a large part due to capitalism, essentially and the way that our economy works.

“So I became obsessed with reading about post-capitalism. . . . That’s kind of where the cards of Future Politics came from.”

Yet despite the dreary imagery of the album’s first two videos — “Future Politics” with its sick, zombie-like characters and “Utopia,” where Stelmanis digs into a bowl of grubs — Stelmanis says that Future Politics is an album of hope.

“The writing process did start out very, very bleak,” she admits. “When I was writing in Montréal, I was feeling pretty intense feelings — even from just being off tour — from kind of loneliness, isolation, depression and kind of experiencing what I sort of see is this collective depression that the people of our generation are feeling right now. So the record did start off very, very dark.

“But I suppose I was able to come out of that with my obsession with the future. So that’s why I think on the record it’s very obvious which songs are written specifically during that dark period and which ones were written after.”

“When I first set out to make this record, I had this idea that I wanted to make background music,” she says. “I felt like the previous record had an aggressive delivery.

“I wanted to do the complete opposite: I wanted to focus way more on creating an ambience and a vibe, so when I first was writing songs for this record, I had a lot of really slow and relaxed songs. I had too many — I had to wade through them because I realized it wouldn’t translate on a live stage at all. But there is much more care towards the ambience and texture of the tracks (compared to) in the past. And even the style of singing has changed a lot too, I would say.” 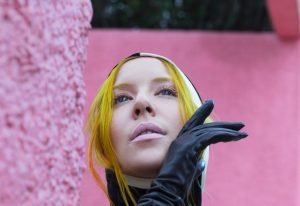 Pressed to explain, Stelmanis used “Beyond a Mortal” as an example.

“Its style is very, very light, whispery singing, which I hear a lot of artists do regularly who probably aren’t pro singers, but they do it really well,” says Stelmanis. “But for some reason, because of my operatic background, it’s like, super hard for me to sing like that. I recorded that vocal track probably 100 times, experimenting with different ways of singing, different microphone placements, trying to get this really intimate recording.”

With Donald Trump’s inauguration south of the border occurring coincidentally on the day of Future Politics’ release, Stelmanis says there’s plenty to worry about.

“It’s definitely a pretty terrifying time,” she says. “For someone of my generation, it’s my first time experiencing true political uncertainty, where nobody really knows what’s going to happen. I think we can easily see a World War III during a Trump presidency, or we can see him being impeached in six months. It’s really hard to know how long this rise of the neo-fascist right is going to be strong. How far is it going to go?

“It’s just really scary. I really believe — and what I’ve gathered from all the research and reading I’ve done — is that the left doesn’t have a chance if they don’t have a vision for something different. So rather than just resisting a Trump presidency, it’s so important to have something better prepared and ready to replace it.”

That’s missing: there’s got to be a vision that people can grab onto and feel strongly about that can kind of rise above this neo-fascist vision that’s so popular right now.”

Be the first to comment on "Austra steps into a perceived troubling feature with new album, tour"