Grammy-nominated Danish band takes ‘7 Years’ — an ‘old-style country ballad’ — and other meaty numbers into show at Rebel on Wednesday.

It’s sold more than four million copies in the U.S. alone, is nominated for three Grammy Awards and is a poignant synopsis of one person’s life from past to present.

But for all the lifetime of experience chronicled within its four-minute time frame, the memorable soul pop composition “7 Years” didn’t take all that long to write, admits the song’s main author, Lukas Graham Forchhammer.

“ ‘7 Years’ was a three-and-a-half-hour thing to write,” chuckles Forchhammer, frontman for his namesake band Lukas Graham, which plays Rebel on Wednesday night. 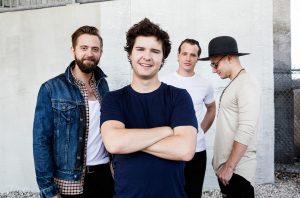 “However, it took another 18 months to then produce it, “he adds with a chuckle. “But that’s the thing when you have a song without a hook: it kind of needs to be a unique production to make sure that people stay engaged and enjoy the whole song, and don’t just get bored after half of it.”

He needn’t have worried: inspired by his father’s death in 2012, the song ultimately got his four-piece Danish band signed to Warner Bros. Records a year or so later, and has since topped the charts in Italy, Austria, Belgium, Sweden, Australia and Canada as well as his native Denmark. (It peaked at No. 2 south of the border.)

“7 Years” has also grabbed a lot of attention at the upcoming Grammy Awards, with the song earning nominations for Record and Song of the Year, and the recording earning Lukas Graham a nod for Best Pop/Duo Group Performance.

“We’re from a very, small country: only 11 people from our country have been nominated for Grammys before and only three people have won them, so it’s a very big thing.

“The whole idea that it’s peers voting for peers, and that we will forever be a Grammy-nominated band, even if we don’t win anything, is kind of cool.”

The good news is that “7 Years” isn’t a stand-alone number on the band’s eponymous album in terms of its quality: autobiographical slice-of-life songs such as “You’re Not There,” “Mama Said,” “Funeral” and “What Happened To Perfect” are consistently and comparatively substantial, adhering to Forchhammer’s avowed aversion to writing what he dismisses as “fast food and popcorn.

“That I write about my family and my personal life experience probably sounds a little bit refreshing to a certain audience,” he suggests.

Forchhammer, a classically educated singer, says his greatest hope is that a song like “7 Years” inspires a new generation of songwriters.

“I think we’ve opened the gateway to a lot of poetry, because ‘7 Years’ is basic poetry with a melodic hook,” he explains. “It’s an old-style country ballad in the spirit of a Woody Guthrie maybe, and I think it’s nice to remind the musical population of the world that it doesn’t have to be four-to-the-floor, fast food and popcorn.

“I like the fact that we’re performing music that is similar to other kinds of pop, and that we write songs and perform music that is very different and unique. And I hope to God that a bunch of young men and women are going to write an amazing piece of music that was inspired by a song like ‘7 Years.’ ”