Rascal Flatts is something of an anomaly in the country music world.

A country pop band with Christian overtones, the core of singer Gary LeVox, his bass playing cousin Jay DeMarcus and guitarist Joe Don Rooney have never really possessed “it”: that intangible level of charisma that undeniably screams “star” whenever you look at them.

LeVox has an OK voice, a high tenor (that jumps up an octave into the realm of annoyance whenever he shouts), with both DeMarcus and Rooney taking occasional leads, and their harmonies are efficient, though not spectacular.

Yet these average Joes have enjoyed above average success since the Nashville-formed band first hit the country charts with “Prayin’ For Daylight” 14 years ago, selling more than 20 million albums, producing a relentless string of No. 1 hits and gathering a crazily-devoted fan base comprised of folks like the one who tweeted on a giant screen prior to the band’s 90-minute set at the Molson Canadian Amphitheatre on Saturday night, that he had driven 1,800 km from Labrador City to watch his musical heroes in action.

The audience consensus — and there were 9,000 or so predominantly plaid-clad denizens in the venue, with another 2,000-3,000 enduring the pouring rain to witness the occasion and warm-up act Sheryl Crow — would probably be that it was indeed worth the drive, despite the fact that the band occasionally fell short in their delivery.

But the song has always been the most important aspect of the country music medium, and Rascal Flatts certainly knows how to pick them: the ballad “What Hurts The Most,” “Fast Cars and Freedom” and “Bless The Broken Road” — all country chart-toppers — found the audience jovially singing along and filling in the gaps whenever LeVox pointed the microphone in their direction.

Except for a lacklustre “Why Wait,” a slightly shaky “Here Comes Goodbye” and LeVox’s extremely pitchy opening line of the newer “DJ Tonight,” the trio strengthened in momentum as the show progressed.

Something that separates them from the rest of the pack is their quirky charm: DeMarcus is the comedian, so he took some time to do a short shtick about the end of summer coinciding with the disappearance of women wearing Daisy Dukes shorts that the audience lapped up.

They also pulled a novel twist on the band introduction, recruiting their six backing musicians to join them in an a capella version of “Love You Out Loud” and an alternate take of Pharrell Williams’ “Happy.”

For the acoustic portion, LeVox announced he was taking a pee break and returned to the stage with Sheryl Crow, who performed her song “The Picture” and then stuck around to help the band with “My Wish.”

Speaking of the seemingly ageless Crow — looking marvellous at 52 as she did at 32, around the time Tuesday Night Music Club introduced her to the rock mainstream and multiple Grammies — she delivered a solid hour-long set in which she seemed a little livelier than in previous performances. 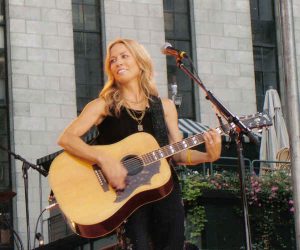 Also accompanied by a six-piece band, Crow delivered enjoyable renditions of “All I Wanna Do,” “If It Makes You Happy,” “Soak Up The Sun” and “Everyday Is A Winding Road” with the rock edge she’s known for, as well as a political and pensive “duet” about war with the late Johnny Cash of “Redemption Day.”

Although largely sticking with guitar, she also played a bit of keyboard, bass and harmonica, loosening up to venture out to the extended stage in the pit to slap hands with the crowd. For a woman who has been accused in the past as being a staid entertainer, it was nice to see her loose and relaxed.

The same could be said for Rascal Flatts, who ended the show strongly with their hit rendition of Tom Cochrane’s “Life Is A Highway,” and then encored with a cover of Motley Crue’s “Kickstart My Heart” before finishing with “Me and My Gang” and a thundering flashpot explosion.

Rascal Flatts may still be somewhat of a head-scratching country music enigma, but there’s little doubt that their fan base will walk to the ends of the Earth to experience them.

Be the first to comment on "Rascal Flatts concert worth braving the weather: Review"