Creator on the move’s career takes him to the Danforth Music Hall on Saturday, helped a bit by Milla Jovovich.

Want to know how to get the face of the Resident Evil film franchise to star in, and direct, your music video? 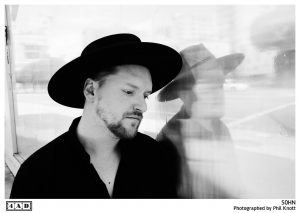 For Christopher Taylor, who records under the name of Sohn (pronounced “sawn”) — and appears at the Danforth Music Hall on Saturday — you just tweet actress Milla Jovovich a thank-you note.

“She had been sharing some of my stuff on Twitter and I basically sent her a message last year to say thank you,” recalls the electronic music artist and producer, reached by phone earlier this week in New York.

“She got back in touch with me right away and said, ‘Oh my God, am I really speaking to you?’ ”

After a brief conversation regarding how much Jovovich loved Sohn’s debut 2014 album Tremors, Taylor sent her “Signal,” a languid, soulful track on his then-unreleased follow-up album Rennen.

“She is a very excitable and creative person to say the least,” Taylor recalls. “She went crazy over it and suggested all these things she could see visually for it. Then it was a bit of a dance. She said, I could always direct your video and I said, well, you could always be in it.”

Three weeks later, the conversationalists found themselves in Boston shooting the video, which features Jovovich reacting to scenes while other scenes from the actress are projected both on and behind her.

“She made it totally happen,” says Taylor. “She produced it as well, so she organized everything down to the point where she asked me what time she wanted my taxi to arrive and stuff.”

The percolating synth runs and industrial-lite rhythms that permeate Sohn’s sophomore album Rennen — which means “run” in German — is the latest sonic evolution for the London-born Taylor, who began his musical life in the U.K. over a decade ago as part of an alt-rock band Trouble Over Tokyo.

The lineup quickly dissolved into a solo project that lasted four albums.

“I didn’t find many people with whom I could share my idea of where the music should go,” says Taylor. “I was young and I didn’t find working with people to work for me, because I was always very direct about what I felt needed to happen and for me it was always non-negotiable.”

About nine years ago, Taylor reassessed his life and moved to Vienna.

“You can get paid for playing shows (in Austria) and can make a living as a musician, and get on national radio,” Taylor explains. “The downside is that it’s a bit of a bubble. You don’t break out into other countries very easily.”

In Vienna, he built a small, but loyal audience and he also worked at a friend’s studio whose instrument collection included 30 vintage analog synthesizers.

“I was so excited by these ‘new’ instruments to me, and in trying to understand how they work, completely surprised myself and built a sound by accident.”

When Taylor decided to abandon Trouble Over Tokyo and rechristen himself as Sohn, he assembled a band at the Eurosonic Festival, which he describes as “sort of like South by Southwest in Europe.”

“Our first ever show as a band — I had (recruited) musicians that had been doing what I’d been doing, playing for 10 years and becoming really good musicians. So our show stood out a mile. A lot of booking agents and labels suddenly sat up and said, wow, this is an incredible live show.”

Sohn signed with 4 A.D. Records and released Tremors in 2014, before relocating to Los Angeles and later creating Rennen in Sonoma, California.

In L.A. he did remixes for a number of tracks, including The Weeknd’s “Where You Belong” and Lana Del Rey’s “Ride,” and wrote for and produced alt Brit duo Aquilo, singer-songwriter Banks and Ghanian singer Kwabs.

He was also invited to write for Rihanna.

“You end up in writing camps where you met four people you’ve never met before, generally middle-aged white dudes, and they’re all trying to write sexy songs for Rihanna. It’s totally ridiculous,” he laughs. “I burnt out from it pretty quick.”

He sees Rennen — which features his latest single “Hard Liquor” as a much different beast than its predecessor.

“Tremors I now look back as a break-up record — at the time I hadn’t broken up, but it became one,” Taylor explains. “It totally makes sense from start to finish as a breakup record, now that I look at it. Rennen is a record that’s a journey on keeping moving. There are a couple of political songs that emerged — there are love songs on there and songs about reaching a destination, where Tremors was more about escaping a situation.”

Now married with a five-month-old baby in tow, Taylor says his next move is to relocate to Barcelona.

“Keep moving is the key,” Taylor notes. “If we stayed in Los Angeles, it would be like settling down. We still have a young family, so I still want to keep bringing new elements into what I’m doing.”