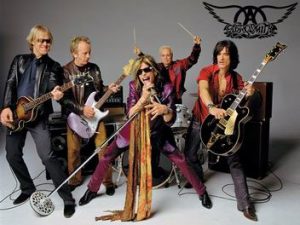 Twenty-five years together is usually considered a milestone.

In the case of rock and roll legends Aerosmith, it’s a miracle.

Excessive bouts of drug and alcohol abuse, as documented by the band themselves in the excellent and intriguing 1997 autobiography Walk This Way, legal entanglements, personality conflicts and even a partial breakup in the late ’70s and early ’80s are just some of the odds singer Steve Tyler, guitarists Joe Perry and Brad Whitford, bassist Tom Hamilton and drummer Joey Kramer have survived.

Their various triumphs over adversity have become such  common themes in the Aerosmith timeline that even the band’s recent album titles are laced with a dark sense of irony.

Sandwiched in between them? A four-song contribution to the soundtrack of a film called Armageddon.

Co-founding guitarist Joe Perry puts it all in perspective.

“The irony of us being together as a band doesn’t escape us, and the fact that we’ve come this far — our minds are blown that we’re still doing it,” said Perry over the phone from Chicago.

“We’ve always felt like we were American’s hometown band. We’re still out there playing, and I think we’ve cheated death a lot of times. Who knows what’s going to happen tomorrow?”

More irony. This Joe Perry interview was conducted in May a few days before Aerosmith visited Anchorage, and the band was beset by another setback: injury.

“We were near the end of the set of our second show in Anchorage, and Steve jumped off something, threw his mic stand around and hit himself right in the knee,” said bassist Tom Hamilton Saturday, speaking from Holmdel, New Jersey prior to Aerosmith’s historic concert webcast.

“It threw him completely off balance and he hit the floor at a weird angle. Somewhere between those two events he tore a ligament in the back of his knee.

“It turned out he needed surgery, and a three-month extended period of recovery and physiotherapy to make it heal.”

The accident forced the rescheduling of Aerosmith’s Copps appearance to this Saturday, but Tyler wasn’t the only one who suffered.

“Joey Kramer pulled into a gas station and was having his car filled. The pump nodule didn’t shut off, and the next thing he knew he’s sitting in a car that’s engulfed in flames, ” Hamilton reports.

“He had to jump out of the car and run through the flames to get away from it, and wound up with second-degree burns. That resulted in another three-week postponement.”

The photo of Kramer’s burned-out sports car can be spotted in the album art for A Little South Of Sanity.

The good news is that, barring any other unfortunate incidents, all Aerosmith members will be healthy by the time they hit the Copps stage.

“Joey is 100 percent healed,” confirmed Hamilton. “Those second-degree burns don’t tend to be threatening in any permanent way.

“Steve, the only way I know anything ever happened is that he has to wear a leg brace onstage. He has to take a lot of extra care on his knee when he’s offstage, but I don’t notice it slowing him down when he’s in the middle of a show. He’s not doing any handsprings, but I don’t think people are going to see a difference in his performance.”

Speaking of performances, Aerosmith has just released their second live album, A Little South Of Sanity, 19 years after Live Bootleg  hit the streets.

“When I listen to Live Bootleg, a lot of it’s very uncomfortable for me, because I can hear the cocaine and the Jack Daniels,” admits Hamilton. “There are parts of it that I love.

“I think it’s a pretty good album, but I never thought it represented what we were capable of, and I think A LIttle South Of Sanity  does.”

A Little South Of Sanity  was initially recorded during the band’s Get A Grip tour, but Hamilton says the band wasn’t satisifed. In fact, they were embarrassed.

“We had a finished live album that we basically threw in the trash because we were disgusted with ourselves,” he says. “There were songs that we were playing too fast, or that we played sloppy, or with no dynamics. So we put that aside and decided to keep recording on this tour. We had to tell the record company, sorry, it was going to be a little while before we’d get this record out.

“We took what we learned from listening to that first round and applied it to how we play now, and the band took a big leap forward in terms of playing the songs in the groove and playing the dynamic — really playing it right. We finally got a bunch of versions of songs that we were happy with.”

Joe Perry says the band will be playing all the favorites — and even throwing in a few surprises.

“We play a lot of everything. We try to keep it down to about two hours and 15 minutes. We do some real esoteric stuff, like different album cuts from the third record, and we also do ‘Dream On.'”

Instead, it’s fueled their fire, even though Tom Hamilton admits he enjoyed spending the summer off the road.

“It was awesome to be home with our families and go to the beach and just enjoy the summer, but after awhile it definitely felt that there’s this other incredibly beautiful thing out there for us to go do, and it was time to go do it,” Hamilton admits.

There’s one other desire communally shared by the members of Aerosmith.

“A compulsive need for mass approval,” he chimes. “We find the longer we’re around, the more interesting opportunities come drifting our way.”

One of those opportunities — recording the heart-wrenching Diane Warren ballad “I Don’t Want To Miss A Thing” for the soundtrack to the film Armageddon — has given them a #1 hit and added to the cache of nearly 75 million Aerosmith albums sold.

But Hamilton admits the band resisted the idea at first.

“We put up our usual knee-jerk resistance when we first heard it,” Hamilton admits. “But the meeting where we first heard the song was also attended by Matt Serletic, the soundtrack producer, and right off the bat he made a really good impression. He made us feel comfortable that we could do a song like this and still have it be Aerosmith.”

Hamilton says the band got along so well with Serletic that they’re seriously considering him to fill the role of producer when Aerosmith convenes next year for studio album 13.

Joe Perry says the future of Aerosmith is limitless.

“We’re a bunch of overachievers and misfits always trying to make a better record, reach more fans and satisfy the ones we have.

“If there’s ever a point where we’re walking through it and no one cares, that’s when we’ll stop. But our love of music has carried us this far, and it’ll see us through the good and the bad.”

Published in The Hamilton Spectator, October 21, 1998