PUBLISHED IN THE KITCHENER WATERLOO RECORD ON THURSDAY, OCTOBER 30, 1998

For the KW Record

For their upcoming show at the Centre In The Square, the inimitable Penn & Teller promise to heal polyester, conduct a “seance opera” to invoke the spirit of escape wizard Harry Houdini, and colorfully make a rabbit disappear using an expensive shredder.

But the greatest trick in their repertoire?

“Surviving for 23 years in a partnership,” comments a deadpan Teller over the phone from Boston. “That’s not only difficult, that’s positively miraculous!” 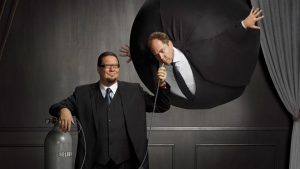 That may not mean much to the uninitiated, but to devoted fans of the warped Las Vegas-based comic illusionists — whose magical mayhem earns them regular visits to appear on Letterman and Leno — it’s a revelation!

Penn Jillette, 42, is the tall, garrulous former juggler originally from Greenfield, Massachusetts who usually offers an instructive overview of whatever stunt or trick the duo is performing at the time.

Teller is his shorter sidekick, and he specializes in silence. Whether he’s deeply engaged in the impressive Forklift Card Trick or “accidentally” skewering himself with a pencil, Teller usually remains mute.

The words “abracadabra,” “hocus pocus” and “razzle-dazzle” aren’t in the Penn & Teller vernacular. When Penn & Teller wave their metaphysical wands, someone is more likely to be impaled.

“We violate basic S&M rules,” laughs Penn Jillette in a separate interview. “We do leave marks.”

As skeptical as his partner is about magic, Jillette says the duo don’t consider themselves part of the magician fraternity.

“The problem is, the classic definition of a magician is an actor playing the part of a magician,” Jillette explains. “That’s what stage magicians are, although we don’t fit into that category.

“Our stuff is all based on , ‘This is a swindle. This is a scam.’ And how you perceive it is very, very important. What we do is irony. ”

“I had watched a lot of magicians, and I listened to what they were saying,” he notes. “It always went something like this: ‘Look, here is a red ball. Now I’m putting the red ball into my left hand. Now I wave the wand around it, and lo, it is gone.’

“I felt this not to be poetic or sparkling,” he laughs. “I felt it to be the quintessential example of redundancy. Pretty much everything that anybody ever said in my experience in a magic act was crap.”

Teller said his pursuit of silent trickery was fostered in college.

“I conned the theatre department into Amherst College where I went, into letting me do the reading course. Usually it involves reading a lot of books and writing reports, but in this case the professor conspired with me, and we called it ‘The Figure Of The Magician In Dramatic Literature.’

“Yeah, right. What this meant was ‘Teller Works On His Magic Act Without Talking.’ So I worked on the idea of presenting a bunch of pieces of magic without talking.”

If you can’t make the show, you can watch the duo’s upcoming TV special Penn & Teller’s Home Invasions on ABC on November 11.

Or read their latest book, How To Play In Traffic  (Boulevard Books, $26.95), where the pair invites you to drop by a famous cemetery whenever you’re in Hollywood.

Just bring a deck of cards.

“If you happen to be visiting Forest Lawn Cemetery with whoever your traveling companion is, you do a card trick,” explains Jillette. “You have the person select a card, look at it, and you tell them what card it is but you fail. They’re told to keep that card, put it in an envelope, and remember it forever. They slide it in their pocket, and you say, ‘Gee, it’s supposed to work. I don’t know what’s wrong.’

“When you’re at Forest Lawn Cemetery and you go by Stan Laurel‘s grave, four gravestones over is a gravestone that says `Penn & Teller — Is This Your Card?’ And the card is there.