Our music scene delivers new trends all the time, but over the past few weeks Toronto has played host to a pair of acts whose core artistry shares its inspiration from an entertainment source that can be traced back to 2400 BC: the clown.

Puddles Pity Party –  the perpetually sad, grease-painted giant with the basso profundo voice – and Mac Sabbath – self-proclaimed purveyors of “Drive-Thru Metal,” the homemade genre that lampoons McDonald’s-fuelled fast food culture in the guise of Black Sabbath classics – landed here within a week of each other.

Mac Sabbath is a four-piece metal band from L.A. led by singer Ronald Osbourne, guitarist “Slayer” MacCheeze, bass player Grimalice and drummer The Catburglar – five, if you count the roadie/foil Employee Of The Month – and each is a cartoonish throwback to the heyday of 1970s McDonald’s TV commercial characters. 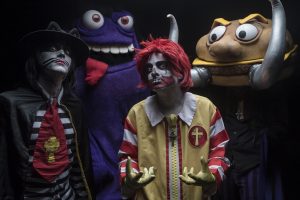 At the band’s Toronto debut at Lee’s Palace, they served parodies like “Frying Pan” and “Pair-O-Buns” (Black Sabbath’s “Iron Man” and “Paranoid” reimagined) dished with a side order of one-liners. At the heart of their thinly masked satire is an attack against the junk food industry, prioritizing profit over health.

Singer Osbourne pulls it off with all of Ozzy’s most famous mannerisms – right down to his crusty British accent and maniacal laughter, his jumbo-strawed mic stand adding to the notion that humour is a hammer best wielded via musical mirth.

The Atlanta-based Puddles Pity Party, on the other hand, didn’t exhibit a diabolical bone in his body when he hosted a half-filled house at the Queen Elizabeth Theatre a week earlier. 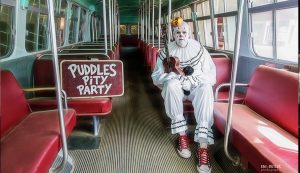 Billed as “the Sad Clown with the Golden Voice,” the 6-foot, 8-inch entertainer known to his parents as Mike Geier spent a generous amount of pre-set time shaking hands and offering “Puddles Cuddles” to his fans, while displaying an unhealthy obsession with actor Kevin Costner.

As with Mac Sabbath, Puddles’s repertoire consists of the familiar, tracked to accompany his agreeably clear and powerful vocals on dramatic and robust versions of Sia’s “Chandelier,” Leonard Cohen’s “Hallelujah” and Tina Turner’s “We Don’t Need Another Hero.” Puddles is an outlier, projecting an insecure sense of vulnerability, loneliness and desire for intimacy to come to his rescue.

Unlike Mac Sabbath, this YouTube sensation, who first came to prominence through his occasional contributions to Scott Bradlee’s Postmodern Jukebox – and most recently as quarter-finalist on America’s Got Talent – sticks more to the tradition of the clown you’d encounter at a circus or hire for your kid’s birthday party.

For the two-plus-hours he occupied the stage, he communicated primarily in grunts and gasps, incorporating vaudeville and slapstick into his mimed comedy. Audience participation was encouraged as Puddles invited concertgoers to join him onstage for amusing spots. One person belted out a tone-deaf version of Eric Carmen’s “All By Myself” to loud applause.

Pathos was occasionally mixed with poignancy: at one point, Puddles strummed a fake guitar and sang Cheap Trick’s “I Want You To Want Me,” as pictures of cute animals wearing tiny Puddles Pity Party crowns on their heads were projected on a video screen to promote pet adoption. 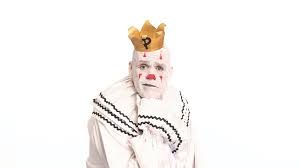 Puddles’s versatility and humanity offered more of a well-rounded connection than the one-trick, but still enjoyable Mac Sabbath.

But you have to wonder: could they ever be embraced by a bigger audience?

Clowns can be polarizing, especially with the recent rise in popularity of sinister jesters like Pennywise from It and American Horror Story’s Twisty.

“There’s this physical and emotional barrier that exists between the audience and clowns, because it’s a put-on performance that’s often anonymous,” suggests Benjamin Radford, author of the 2016 book Bad Clowns, over the phone.

“You don’t know what they’re going to do and that’s part of their appeal. If you knew, then it wouldn’t be entertaining. The whole idea of a clown is spontaneity and the trickster figure.

“The inherent tension in scary clowns is what attracts people and it bleeds into the public’s polarizing notion of them.”

Even cult acts like Insane Clown Posse and Twiztid have found their success limited by embracing the culture, although Radford argues that public distaste for the fright-wigged set may be exaggerated.

“The fear of clowns, coulrophobia, is a pop culture, socially expressed disease virtually unheard of in medical literature,” Radford explains. “It’s not really a genuine deep-seated clinical fear. What you find is that there are enough popular scary clowns in general that people love. The It [movie] remake from 2017 grossed $700 million in box office worldwide. So, even if people say they hate or are afraid of clowns, they like to see them in entertainment. There’s a dual nature to it.”