Nick Cave and the Bad Seeds

Eons ago, when this concert was announced and the venue was still known as the Air Canada Centre, there was speculation that Nick Cave and his Bad Seeds might have overreached by booking an arena show.

After all, despite being around since the early 1980s and releasing 16 albums, the 61- year-young Australian raconteur with a silver tongue for vivid storybook prose is still very distant from what you would call a household name.

The attendance at Sunday night’s Scotiabank Arena spectacle reflected that reality: there were scores of empty seats and the venue’s upper tier was covered, with a guesstimated 7,500 to 9,000 Nick Cave diehards shelling out to see their hero in action.

However, is the glass half-empty or half-full? It can be argued there were more people in attendance than at Cave’s last two-night appearance at Massey Hall. So let’s recognize it for what it is: progress.

Chances are, those who did attend this final stop of Cave’s Skeleton Tree tour weren’t concerned with how many bodies were occupying the building. They were continually awed by the mesmerizing man who, with a voice as recognizably deep and sonorous as the Doors’ Jim Morrison or the late Leonard Cohen, could transform a cavernous sports hangar into the engaging and intimate pulpit upon which his career was built.

Certainly, the flawless sound was part of the equation: for two-and-a-half hours, every syllable, statement and sound was conveyed with ringing clarity to the point where the audience actually and respectfully listened — you heard no buzz of conversation overlapping the music, as is too often the case at arena shows. 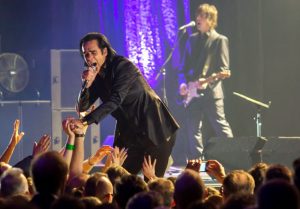 There were also the fabulous Bad Seeds, led by multi-instrumentalist Warren Ellis, an incredibly tight sextet of seemingly ragtag musicians who played with unobtrusive serenity for No More Shall We Part’s “God Is in the House” one moment and then exploded into a heated, euphoric clamour during an extended and strenuous workout of “From Her To Eternity” the next.

Of course, the ringleader of this commotion is the insanely charismatic Cave, whose evangelical zeal doesn’t deter one iota from the potential confines of the stage from which he’s pontificating.

Aside from the spacious stage that allowed him to dance, jump, kick, kneel, provoke numerous band members and cushion intermittent hurls of his microphone, there was a mini-catwalk echoing its width placed a few feet in front that allowed Cave to confront his audience.

He frequently leapt back and forth between the two, occasionally returning to the piano to bang out a few bars of music on the keyboard before returning to his hosting duties.

Make no mistake – Cave is literally an “in-your-face” performer and from the very first notes of the Skeleton Key opener “Jesus Alone,” he was on the platform grabbing outstretched hands and eliminating the barrier between singer and patron.

He’s a charmingly charismatic entertainer who fearlessly fixates on an individual, but somehow transmutes that personal moment into a universal experience for those who are watching him from afar.

The trust Cave builds with his followers is also something to behold – he often leans into his crowd to the point where he’s practically bodysurfing on them, and there was more than one occasion where his follower held him aloft by his legs or allowed him to stand on their shoulders as he delivered a rambunctious “Red Right Hand” or a dynamic “Tupelo.”

Cave is also a wanderer, making his way up to the 12throw se in the stands seat-by-seat as he serenade shocked concertgoers with  “Higgs Boson Blues,” gesturing for the surrounding fans to move as close as humanly possible  before temporarily halting the song for comic relief.

“I’m not sure what the expletive I’m doing up here,” he joked.
“Getting back down is the challenge.”

Later in the show he strolled to a mini-square that doubled as a camera man’s station for “The Weeping Song,” repeating his commands of “C’mon, c’mon, c’mon, c’mon” and beckoning with his fingers to draw his audience in physically closer, before returning to the main stage and inviting 30 or 40 more to join him for the one-two pre-encore whammy of “Stagger Lee” and “Push The Sky Away.”

If there was a negative, it was for those confined to sitting in the stands close to the front of the stage, as side spotlights were so blinding it obscured Cave’s presence on the mini-catwalk.

But that only affected a few hundred people: the rest were treated to a sublime concert by a compelling performer who really needs to be on your bucket list: there really is no other act on the plateau occupied by Nick Cave and the Bad Seeds.

And as for the audience numbers, they will come – especially with the word-of-mouth that will be generated by this performance alone.

Published by The Toronto Star.