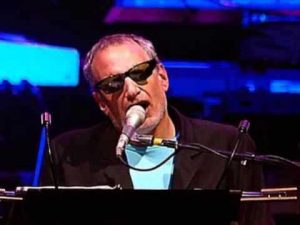 The occasion was one of the first handful of Steely Dan concerts performed since the September 3 passing of the band’s co-founding guitarist, songwriter and producer Walter Becker.

With the sting of the passing of a beloved Canadian icon still fresh in their hearts, music lovers gathered at Casino Rama on Thursday night to mourn the loss and celebrate the melodies of another fallen hero.

The occasion was one of the first handful of Steely Dan concerts performed since the September 3 passing of the band’s co-founding guitarist, songwriter and producer Walter Becker, as singer, keyboardist and co-writer Donald Fagen continues to carry the torch with an 11-piece backup — including a four-member horn section — in his absence.

If you’re wondering how the memorial was handled by the 69-year-old Fagen himself, it was done tastefully: at the conclusion of “Hey Nineteen,” the fourth song of a 19-song set list, the nonchalant frontman mentioned some of the numbers the band would be playing that evening, including one written by “my partner who I recently lost.”

That song, “Book of Liars,” from Becker’s Fagen co-produced solo album 11 Tracks of Whack, marked the midway point of the show, as intimate personal and professional images of Becker, family and friends were projected on a screen behind the band.

Those were the only Walter Becker references during the show. The rest of the 80-minute set before a near-sold-out house was dedicated to Steely Dan numbers, some Fagen solo material and unlikely covers of Joe Tex and Nelson Riddle songs.

As one might fathom, the Steely Dan touring combo, comprised largely of musicians that have been with the band since their Grammy-winning 2000 reunion album Two Against Nature, leans more toward the jazz spectrum of things.

Although Steely Dan music is the very definition of “precision” music — Fagen and Becker were famously meticulous in the studio — the solos were generous and expansive, as each member of the troupe enjoyed their moment in the spotlight. Even the well-choreographed harmony singing trio Fagen tagged as “The Danettes” — Cindy Mizelle, Carolyn Leonhart and La Tanya Hall — enjoyed lead vocal duties on a couple of songs, Can’t Buy A Thrill’s “Dirty Work” (a 1974 radio hit here in Canada for Songbird, featuring future Heart guitarist Howard Leese) and Joe Tex’s “I Want To (Do Everything for You.)”

Not surprisingly, because of the pedigrees involved — most of the players have spread their talents among such legends as Sting, James Taylor, Brian Eno, Wynton Marsalis, Chick Corea, Bruce Springsteen, The Rolling Stones, Whitney Houston — this was monster musicianship at its finest, anchored by guitarist Jon Herington, now carrying the load for the late Becker after playing alongside him for nearly two decades.

He particularly shone during a swinging version of “Bodhisattva” that was performed at a slightly faster clip than the studio recording, his noodling leads both driving and filling the number which was easily one of the evening’s highlights. The rhythmic combo of bassist Freddie Jackson and Buddy Rich-influenced drummer Keith Carlock provided the powerful rhythmic foundation on “Home At Last” and “My Old School,” offering a funkier take on the latter that gave it a livelier punch.

As for Donald Fagen, possessor of one of rock music’s most distinctive voices, he veered from strong to occasionally weak, projecting a softer volume with some of the upper-register notes of songs, and for “Reeling In The Years,” sort of talk-sung his way through it.

A note about “Reeling”: there are some arrangements that shouldn’t be trifled with, and this was one of them. Although Harrington admirably carried the weight of this guitar-based classic, it sorely missed the dual-guitar attack so prominent on the recording, as well as the cascading harmonies in the chorus that added to its magic.

However, the disappointing moments were few and far between, and the evening was capped by a rousing version of “Kid Charlemagne.” Could they have played more Steely Dan hits? Sure. But it was an evening of stellar musicianship where concert patrons would glowingly attest that, unlike the title of the band’s first album, you can buy a thrill.

Steely Dan delivered a night full of them.

Be the first to comment on "Steely Dan delivers thrills at Casino Rama without the late Walter Becker: review"