The contrast between the two performers couldn’t have been more opposite, which perhaps explains why the musicians shared the bill, but not the stage.

Tony Robbins, Pitbull is in your crosshairs.

One of the more intriguing aspects of the first of the two-night double bill at the Air Canada Centre featuring singer Enrique Iglesias and rapper Armando Pérez — a.k.a. Pitbull — was that the latter positioned himself in the mode of motivational speaker for a good portion of his 75-minute closing set.

Just before the Miami-based entertainer arrived onstage to pump the audience with his opening number “Feel This Moment,” built on a riff from a-ha’s mid-80s hit “Take On Me,” the gigantic video screen was filled with images of Mr. 305 — as he likes to call himself; Mr. Worldwide is another nickname — posing with numerous celebrities, receiving a star on the Hollywood Walk of Fame and generally being hyped with the aplomb of a late-night infomercial.

The somewhat chatty Pitbull later explained that not only was he a product of hard work, but that anyone in the estimated crowd of 15,000-plus could achieve his stature if they focused and believed in themselves. He certainly offered tangible proof of his own spoils, assuming your value system includes Armani suits, non-stop partying, playing music and being desired and surrounded by a harem of fawning female dancers.

Let’s face it, Pitbull’s EDM-scented and reggaeton-drenched material revolves around the horizontal mambo. “Hotel Service” is about ordering in late-night food as much as “Rain Over Me” concerns needing an umbrella for inclement weather, and there were pelvic thrusts aplenty as the stylish, sunglass-sporting rapper chanted about lust alternatively in English and Spanish, often honing his gaze in on the fleshy derrières of his eight comely dancers. 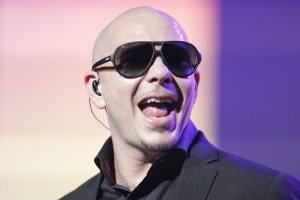 But that’s the theme that Pitbull has pursued to great success over his 17-year career, and as he powered through his set with a five-piece band — including two drummers — cajoling the dancing crowd to celebrate via high-energy numbers like “I Know You Want Me (Calle Echo)” and “Fireball,” he would end each number with a dazzling smile that was anything but cocky.

The contrast between the Madrid-born Enrique Iglesias and Pitbull as performers couldn’t have been more opposite, which explains perhaps the reason — even though they’ve collaborated on a half-dozen numbers and are good friends — Iglesias and the 36-year-old rapper shared the bill, but not the stage.

Whereas Pitbull was all show-and-tell, Iglesias went to great lengths to be a man of the people, often wandering into the crowd during numbers to shake hands, embrace his fans and take selfies.

It was Enrique who spent two or three numbers heading to a B-stage at the very front of the venue; it was Enrique who welcomed Alan, a student from Mexico, who proudly wore the flag of his country as a cape, onstage for a drink (water for the underage guest) and to join him in song; and it was Enrique who thanked everyone for rescheduling their lives as this was a makeup show for an earlier cancellation (to be fair, Pitbull did too.)

Iglesias added a homecoming feel to the proceedings, revealing to the Toronto crowd that he lived in the city when he was 18, and later, just before launching into his mammoth ballad “Hero,” that it was on the ACC stage where he first sang live that biggest song of his career.

Humanity aside, Iglesias and his nine-piece band veered between the energetic pop like “Rhythm Divine” and the Spanish-language “Bailamos,” and the occasional romantic ballad, where he summoned the genes of his father Julio and tried to sing quietly and sensitively in a venue not really suited to quiet and sensitive.

Iglesias pulled out all the bells-and-whistles in terms of special effects that seem to indicate you’re at a bigger-than-life concert these days — cue the fireworks, cue the balloons, cue the confetti — but he really needn’t have bothered — just being an enthusiastic cheerleader for the arm-waving crowd was quite enough. 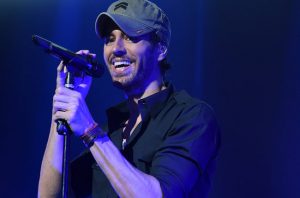 With the one-two punch of Enrique Iglesias and Pitbull, no one felt shortchanged by any means. The duo are back at the ACC Sunday night.

Be the first to comment on "Odd pairing Pitbull and Enrique Iglesias was rhythm divine at Toronto concert: Review"