Eric Clapton calls him “by far and without a doubt the best guitar player alive.”

Yet it’s the fans that dictate Buddy Guy‘s agenda — even if it means entertaining them in sub-zero degree weather.

“I played for people outside last year at my club (Legends) when it was 23 below zero,” the zealous Grammy-winning bluesman said last week. “There was a line-up outside of people who couldn’t get in when I was playing, As I was heading out the door, my manager said, `You can’t go out there! It’s freezing!’ And I told him, `They came to see me and they can’t get in . I have to go out there and show them just how much I love them.’ And I played out there for about ten minutes.'” 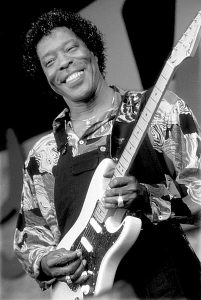 Known for his wailing voice; a sweet, stinging guitar sound and the ability to mimic any style in the world, Guy’s loyalty to his audience is unquestioned. They’re the ones who supported him, filling clubs, parks and small auditoriums, when the record companies abandoned him throughout the ’80s. And the 58-year-old musician refers to how much he loves them and owes them frequently during a phone interview from his home just outside Chicago, conducted at 9 a.m. sharp when musicians half his age are still snoring from a previous night’s work.

So it seems strange when Guy — who began a tour to support his brilliant new album, Slippin’ In, earlier this week — states he intends to cut his touring in half in 1995.

“For the past four years I’ve played day in and day out, and I don’t want people to say, `Oh there’s Buddy in Connecticut. There he is in New York. We can see him anytime, because he’ll be back next year.’ I don’t want to wear out my welcome.”

Guy says it’s a lesson from his mother he’s heeded from the days of his childhood back in Lettsworth, Louisiana, when his family sharecropped for a living. By the time he was in his early teens, Guy’s family had scrimped enough for electricity to light their cabin, and barter a guitar for a teenager enamored with the music of Howlin’ Wolf, Muddy Waters and John Lee Hooker.

“I’ve been very much happy with the way I’ve been accepted. I look at it like a good meal. You enjoy it, but you don’t want it every day.”

After growing up in the Delta, pumping gas and working as a janitor at Louisiana State University, George “Buddy” Guy cut a couple of demos at a local radio station and sent them to Chicago-based Chess Records. He boarded a train to Chicago, and spent the next six months walking the streets in starvation, in search of a job.

Upon meeting a stranger in the Spring of ’58, Guy ended up at the 708 club, where he was challenged by Otis Rush to a guitar duel. A few weeks later, Guy’s reputation reached the ears of McKinley Morganfield — best known as Muddy Waters — who took the young guitarslinger under his wing and drafted him as a session player for the Chess Records roster, which also included Howlin’ Wolf, Willie Dixon and Etta James among others.

“I didn’t get stuck on any one style,” says Guy. “That sort of helped me out.”

Produced by Eddie Kramer, half of Slippin’ In  was recorded with Double Trouble, the late Stevie Ray Vaughan’s rhythm section.

“Even before Stevie passed, and I didn’t have a recording contract, those guys would always drop by the club and say, ‘I wish we could do something.’ My first album was with Eric, Jeff Beck and Mark Knopfler, and the second was with Bonnie Raitt. I thought, the third one has got to be with Double Trouble!”

With a Canadian gold album for 1991’s Damn Right I’ve Got The Blues  and a live tour rumored to hit Toronto in March, Buddy Guy has at least one milestone left to achieve.

“I’d like to open a few more doors that Eric Clapton opened that are closed to me,” says Guy. “I would like for the people to hear some of my music on the radio. I’m not talking about Buddy Guy’s music — just blues in general: B.B. King, Junior Wells and Jimmie Rogers. Just so the young people can hear the originals.”

Guy admits that television has responded to programming blues artists on late night talk shows, but he says radio has a long way to go.

PUBLISHED IN THE HAMILTON SPECTATOR ON JANUARY 12, 1995 AND THE KITCHENER WATERLOO RECORD