Published in the Hamilton Spectator on Thursday, January 11, 1995 to promote a January 17 gig at the 18,000 seat Copps Coliseum with Bryan Adams.

You should be. Bryan Adams, Canada’s consummate pop songwriting superstar warns that this Wednesday’s Copps Coliseum appearance will be the final show before he finishes his first album of completely new material since 1991’s Waking Up The Neighbours. 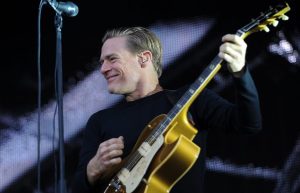 “This’ll be the last time you’ll see things basically the way they were, because I’m about to ‘metamorphosize’,” said the 36-year old Adams in an exclusive interview from his London, England home.

“I’m gonna have a whole new album, of which 11 songs are completely playable live, which means a lot of the old stuff is going to be binned,” said Adams, recently nominated for a Golden Globe and two Grammy awards for his flamenco-flavored hit, “Have You Ever Really Loved A Woman?”

Then he shifts into the voice of a cheesy Top 40 disc jockey.

“And we’re going to have a spanking new show.”

By far Canada’s biggest player on the international pop scene with over 40 million records sold, Adams plans a two-and-a-half hour set list of familiar megahits, including “(Everything I Do) I Do It For You,” “Summer Of ’69” and “Cuts Like A Knife.” However, the fresh material will have to wait until April, when he launches his world tour in Estonia.

“I tell ya, I’m so anxious to play all these songs,” Adams enthuses. “But I’m hesitant to play new songs live until they’re well rehearsed. None of the road crew or anybody has heard this record yet. And it’s hard enough to remember the old songs, never mind the new ones.

“My guess is we’re probably gonna do a similar sort of show to what we did at the Molson Amphitheatre, and then we’ll come back again at the end of this year, I guess, and try again with a whole new show.”

Does that mean a mosh pit?

“Listen man, before there was a mosh pit, there was a bunch of people in front of the stage,” says Adams. “So it’s now been named the mosh pit, but there’s always been people in there. Call it what you want. I don’t mind. It’s great.”

During a year when Adams has limited his live performances to christening new venues, his Copps appearance is a rarity. He opened Toronto’s MCA Molson Ampitheatre last May, Vancouver’s GM Place last Fall and is scheduled to baptize Ottawa’s new Corel Centre two days before his first Hamilton appearance.

“I work for department stores too, don’t forget,” jokes Adams, referring to the festival he headlined for The Bay’s 325 birthday near Calgary this past summer.

“So we play for department stores and new buildings now. It’s hysterical.”

He seemed genuinely unaware of the festive occasion surrounding his visit to the Steel City.

“150 years? Hamilton?” he asked. “Someone better get me some information on Hamilton then. I better get the Mayor to send me down a little pamphlet on the history of Hamilton.”

Adams says he leaves the concert booking details in the capable hands of Bruce Allen, his longtime Vancouver-based manager.

“I tell Bruce, `Look, I’m in the studio. Get me a weekend of gigs a month.’ So that’s what he does, and he tries to make them as fun as possible. He’s been very successful in finding me some great jobs to do.”

“I’ve got to put that guy to work somehow. He’s got that big office. He might as well use it.”

While he’s unwilling to reveal the title of his new album, calling it “a surprise,” Adams compares the work to an earlier classic.

“I think it’s my best album, and I’ve never said that about any of my records. So I’m saying it now,” he laughs.

“It’s up there with Reckless, and it’s certainly the best album I’ve made since Reckless. So, I’m stoked. I’ve never been so excited and anxious about releasing a record as this one!”

His second effort since switching writing partners from Jim Vallance to co-producer Robert John “Mutt” Lange, Adams says nobody will be shocked by any of the eleven songs he started from scratch in September ’94.

“I think this is in the grand tradition of what people would expect from me, and the surprises really are just that my harmonica playing’s gotten a lot better. This boy’s had the blues!” he laughs.

Apart from enjoying a recent holiday, Adams has a lot of reasons to be happy. He recently co-authored a self-titled book with photographer Andrew Catlin documenting the past decade of his career. It’s available through Firefly Books at $29.95.

“I’m very pleased with it, because it is a nice broad view of what I’ve done in the last ten years,” says Adams. “It could have been a bit more detailed if I’d thought about it more. Now that I’ve done that, I can do another one. It’s like anything. You have to stick your toe in to know if you like it or not.”

He’s also preparing to open his own studio, The Warehouse, in Vancouver, and learned how to swim while living in Jamaica for six months.

His most recent cause for celebration started just before Christmas, when “Have You Ever Really Loved A Woman?” was nominated for a Golden Globe for Best Original Song for the film Don Juan DeMarco. Then just last week, it earned the vegetarian bachelor a pair of Grammy nominations for Best Vocal Pop Performance, Male, and Best Song Written Specifically for A Motion Picture: the latter shared with writing partners Mutt Lange and Michael Kamen.

Can an Oscar nomination be far behind?

“When I heard that I’m nominated in a best male vocalist category with Elton (John), Sting and Seal and Michael Jackson, I burst out laughing. I’m just a guy from North Vancouver! When I see that list, I think it’s funny. I think it should go to Seal. I think he sang that song (“Kiss From A Rose”) great.”

The Order Of Canada recipient doesn’t reveal whether or not he’ll attend the Golden Globe ceremony on January 21 or the Grammies in L.A. on February 28, but he is uncertain whether he’ll make it back to Copps for the silver anniversary of The Juno Awards March 10.

“I have no idea, because first of all, I don’t even know if I’m nominated, so that remains to be seen,” says Adams, who has collected 14 Junos over the years.

“I’ll tell you what I am doing for the next two months: I’m finishing my album. The only things I’m doing between now and watching the last fader go down on the last song are these two shows in Ottawa (January 15) and Hamilton.

“Otherwise, I’m going to be face down in my music, because I’ve gotta finish it now. It’s make or break.”