Published in the Hamilton Spectator on Thursday, November 3 1994 in advance of a November 5 concert at Hamilton Place

TORI IN THE PINK

Tori Amos has a hard time keeping a secret from anyone these days. 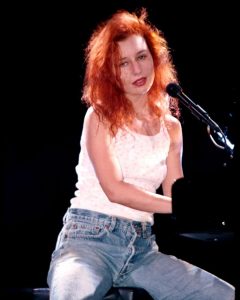 “They know everything, these kids,” she is saying from New Jersey, another stop in a grueling 10-month world tour that brings the London-based singer and songwriter to Hamilton Saturday.

“They talk to each other on the Internet. You can’t keep anything from them. Either they know the guy you’re seeing, because somebody spotted you at his show, or they spotted them at your show, or they’ve figured out who I’m singing about, and tell me to say ‘hi’ when I see them. I get that all the time!

“You kind of feel like you have this very big, curious family,” she laughs.

Amos knows she only has herself to blame. When she released her confessional Little Earthquakes  album in late 1991, she bared her soul to such a degree that fans considered her a confidante or a therapist rather than an entertainer.

“You don’t know what it’s like, having people call you in the middle of the night because they discovered your pseudonym at the hotel you’re staying and they phone you up to ask you a question about your music,” says Amos.

After articulating religious guilt in “Crucify;” chronicling a chilling assault on “Me And A Gun” and personal awakening in “Silent All These Years,” people probably would have forgiven Amos for subduing her honesty on the follow-up album, Under The Pink.

But Amos wouldn’t hear of it.

“When nobody knows who you are, nobody’s stopping you in the Safeway or chasing you down the street,” she explains. “There’s an instinct that kicks in – maybe self-preservation – to start protecting your true feelings, which translates into less powerful writing. I’ve gotten to the point where it doesn’t matter. You can’t worry about that anymore. You’re very exposed, and no matter what has happened, you can’t go back to the point where you started before all this occurred.”

She also feels she made enough changes for a fresh approach to Under The Pink.

“I had two years to write Little Earthquakes. Those songs weren’t lying around for years. That was written in a diary form, and I understand that I didn’t want to repeat that for the next album. Everyone knows of the sophomore jinx – that sophomore records go down the toilet – and I didn’t want to do that. Everybody has to choose a different form, so I chose to be more lyrically abstract. After ‘Me and A Gun,’ you can’t get more personal than that. And when I do the third album, I will choose a different path for that one.”

The rebellious daughter of a Methodist minister, Amos says she can thank her parents and her strict upbringing for making her the success she is today.

“I’ve always said that most people get baptized with a little sprinkle of water, but they held my head under for 20 years,” states Amos. “And it’s not until you’ve been under water that you get a clear picture of who the barracudas really are.”

She’s especially suspicious with the role of church in society.

“I have a pretty extensive understanding of the church as an institution, and it’s not about bringing people into religious or creating you as a master of your own destiny. It’s about control, and using the power of control.

“It took me going to church four times a week until I was 21. I saw how parts of myself got completely submerged.”

She also says Christianity has taught women to repress their feelings.

“In Christianity, the role model is a sexless being. Nobody wants to talk about Mary getting some on the side, and as far as the Magdalene — that whore — she’s relegated to the role of the mistress. It’s not about the passionate side of women. We’ve been taught for centuries that if you want good friends and to have a family and be a wife, you have to cut out all feelings from the navel down.

“I’m a real passionate woman. I have been since I was a teenager — and I need to put it in my music to survive. But I have a lot of recovering Christian women coming to my shows — you’d be shocked at how many there are — and they’re having a hard time balancing the lust side and the love side. They don’t know you can combine them both.”

Has Amos learned to merge them?

“I’m working on it, but I’m pretty far evolved,” she laughs.

Despite the discipline, Amos says her relationship with her parents is stronger than ever.

“We don’t talk about (the songs) ‘Icicle’ and ‘God,'” asserts Amos. “We agree to disagree, but they’re still my best buddies. My parents have grown a lot. They know who Tool is. They know Nine Inch Nails. They weren’t always like that. At 35, they didn’t know any of this stuff. Now they’re 65. ”

The 30-year-old Amos has also received accolades as a performer. Seated at a grand piano with her legs spread so she can twist her body and face the audience, the ravishing redhead is almost as well known for her magnificent and well-arranged cover version as for her originals.

When Nirvana was blasting up the charts with the virtually indecipherable grunge version of “Smells Like Teen Spirit,” Amos countered with a reflective, circumspect rendition of her own.

“It’s much more of a tribute now,” she states. “I do a little segment of ‘American Pie,’ because we were in Berlin when I heard about (his death) at 2 a.m., and the only thing that kept running through my head was the phrase, ‘The day the music died.’ The next night I played a real church in Berlin, and I opened with that arrangement. The kids were hanging out of the windows, candles lit up the church and the piano was on the altar. I felt the whole church was weeping.

“It was really a moment of acknowledging what Kurt gave us. We’re never going to have that voice again. I don’t think people have thought what it’s going to be like in five years time to not hear anything new from him. When certain voices are gone, it’s like losing a piece of your heart.”