Now, add guitarist Saul Hudson — better known to the world as Slash — and drummer Matt Sorum to the list of Guns N’ Roses members past and present who have taken time to pursue album projects outside the Los Angeles rock band. 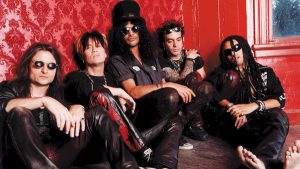 While singer W. Axl Rose stews and simmers the creative juices of his career, Slash and Sorum have assembled a collective of musical colleagues and decided to make full use of their down time.

On February 15, Slash’s Snakepit releases its debut album, It’s Five O’ Clock Somewhere, and at the end of April, they embark on a five-month world tour that should see a Toronto date in early May.

“I didn’t even want to go back into that whole completely-stoned-out-of-my-mind, off-the-road, post-tour depression I’ve been through before,” said Slash, 29, in Toronto last Tuesday. “I just went straight to work, to do something to keep myself active.

“It started out as just jamming. At the end of a couple of weeks — right until the earthquake — Matt and I collaborated on arrangements for 17 tunes.”

Gilby Clarke — Guns N’ Roses’ second guitarist until dismissed by Rose earlier this year for reasons which Slash says are still unclear to him — also joined in the impromptu jams held at Slash’s home studio, as did Alice In Chains‘ bass player Mike Inez.

“All of a sudden I thought, `Hey, we’ve got a band!'” recalls Slash. “A lot of time went by where we had no plans to make a record. We were just having a great time hanging out together. Then I thought, `Well, let’s go into a real studio!'”

Slash ended up auditioning 40 vocalists — including Spike from the London Quireboys and Ron Young of Little Caesar — before settling on Eric Dover, a one-time member of San Francisco alternative rock band Jellyfish.

“His demo tape had a nice Lenny Kravitz, early Aerosmith vibe to it,” recalls Slash, “Eric came and wrote the lyrics of this song called ‘Beggars And Hangers On’ — which was really just a piece of music where we gave him a tape and said — ‘Sing’! It was called ‘Song In D.'”

Though Slash makes it clear that Guns N’ Roses has already begun work on its next album, he also relishes the thought of Slash’s Snakepit bringing him back to the basics.

“It’s an alleviation from the whole stadium concept that Guns N’ Roses has more or less become. Being able to go out and play in an anywhere from 20,000 to a 100,000 seat place is very gratifying, but there’s a point where you want to go back and jam in a club, sweat it out with everybody else and have a beer afterwards.

“It’s sort of like chasing the best looking girls in college. You don’t really feel like you’ve succeeded until you see her panties on the floor.”