PUBLISHED IN THE TORONTO STAR’S What’s On section on February 9, 1995

Words will speak louder than actions at The Opera House tomorrow (Friday) night when Lydia Lunch and Exene Cervenka unite for a spoken word performance.

“Exene is on stage with me, and we’re sort of a tag-team,” says the thirty-something Lunch over the phone from Vermont, where she and Cervenka have just landed after battling their way through a blizzard that walloped the Eastern U.S. and forced cancellation of a performance in Boston this past weekend.

“We’ll be covering everything from O.J. Simpson to welfare recipients to the destruction of the planet in as many words as we can fit our mouths around in 77 minutes.” 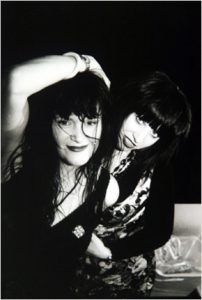 Lunch, who has been described as everything “one part spontaneous genius and one part raving bitch” to “a malignant tumor on America’s psyche” by often fawning press, has been an acerbic lynchpin of New York counterculture since the mid-70s when she helped launch the American punk movement as lead screamer with Teenage Jesus And The Jerks.

Since then , Lunch has branched into a myriad of films, books, video and plays, turning to spoken word in 1982. In 1984, she recorded her first album of scathing rants entitled The Uncensored Lydia Lunch, and has since engaged in over a dozen CD and video projects, with the video Malicious Intent and the triple CD Crimes Against Nature her most recent verbal forays.

In the late ’70s, California poet Exene Cervenka met fellow bard John Doe and formed X, the Los-Angeles based forerunner of the West Coast hardcore movement. The band, which releases its ninth album, Unclogged, independently next month, was later praised by Rolling Stone for making “harsh yet vivid music that gave shape and drama to punk anomie”.

A veteran of literary readings, Cervenka recorded a collection of poetry with Wanda Coleman in ’85 entitled Twin Sisters and has an album of her own called Service To Serpents that will be out in April on Henry Rollins’ new spoken word label.

This 30-stop tour is the first collaboration — save for the odd appearance in San Francisco — between Lunch and Cervenka since the 1982 book Adulterer’s Anonymous, and the first where the duo has equal time on stage.

Yet despite poetry’s recent rise in profile (to be enhanced locally by the February 28 release on Virgin of Word Up!, a collection of 36 poets produced by Toronto’s Jill Battson) and Rollins’ successful spoken word forays, Lunch disagrees that a verbal resurgence in popularity is forthcoming.

“It should be more popular than it is,” states Lunch. “Nobody’s saying anything in friggin’ music, that’s for sure. Spoken word is something more relevant and more direct.”

Known for scathing, humorless attacks on what she views as society’s decay, Lunch says she ventured into spoken word artistry 14 years ago to escape mundane music.

“There were stories I wanted to tell that didn’t need musical accompaniment,” explains Lunch, “Why try to corrupt an angry, violent message with friggin’ music?”

The 40-ish Cervenka, who describes her style as “dry humor, sarcasm, understated, caustic in its own way,” sees herself as a writer more than a poet.

Her ideal audience is one that listens intently and silently, although she did observe an earlier reaction a week ago on this tour.

“When Lydia would talk, there would be hoots and hollers,” recalls Cervenka. “When I recited a piece, it would be deathly silent. Everything would come to a standstill. I don’t know what it means, other than we’re two completely different people.”