If the All Bad Things Must End tour is truly the final hurrah for Hollywood heavy-metal mavens Mötley Crüe, then that was quite the send-off they gave their fans Sunday night at the Molson Canadian Amphitheatre. 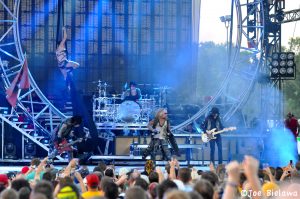 There could never be enough eardrum-rupturing flashpot explosions; no shortage of shooting plumes of flame; no cap on showers of fireworks raining down on the stage, for the band to feel that they were doing anything short of a disservice to the 16,000 plus that filled the venue.

With their amps turned up to “11” (and from my second-section vantage point, the instruments always turned up loud enough to wash out most of Neil’s high-pitched singing), these Dukes of Debauchery spared no expense on the pyrotechnic-heavy visuals, to the point of demanding that their two leggy and busty female harmony singer-dancers frequently change their costumes.

And the crowd, perhaps eager in this era of musically political correctness to cut loose and be transported back in time to relive their heavy-metal fantasies – or maybe just realizing that this could be a historic occasion in terms of the final Crüe appearance in Toronto – returned the love tenfold.

With some of the men wearing throwback wigs and some of the women squeezing into low-cut dresses they first wore decades ago, they partied like it was the ’80s glam-metal scene again: singing at the top of their lungs with Neil to “Wild Side,” dancing in their seats and on top of each other during “Shout At The Devil,” hoisting their beer cups and high-fiving each other at the sheer celebration of witnessing their anti-heroes in action.

“How many of you out there are crazy mother*$%!ers?” Neil asked rhetorically at about the midway point of the 20-song set, as if he didn’t know the response he would get.

Neil and Sixx – the former realizing that he looked long-in-the-tooth enough to forego the glam makeup of his youth, the latter failing to heed that same lesson – spent their time stalking the stage and working the crowd, leaving Mars to worry about chugging out the chunky riffs and leads of anthems like “Dr. Feelgood” and “Kickstart My Heart” and Lee to pound out the rhythms from the giant riser.

And yes, in keeping with tradition, Lee’s solo consisted of being attached to “The Cobra,” a long, steel-necked track that enabled the drum kit to slide up high above the stage, rotate 360 degrees, and allow him to demonstrate his gravity-defying stick-handling prowess. . . although, to his credit, he played along with pre-recorded music rather than the usual 180-beat-per-second exhibition that drummers are prone to do. 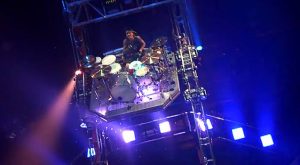 Another highlight was Nikki Sixx’s spot, as he unapologetically and colourfully told the story of Mötley Crüe’s birth, expressing his gratitude for “just being alive,” although his version of events ignored some of the later acrimony that the band endured and ultimately survived.

There was no bad blood to be spilled on this night, and as the band took its final bow on a small b-stage in the middle of the crowd, serenading them with “Home Sweet Home,” one wondered if this is the grand finale or just a short break on the road to Reunionville.

It’s with no small sense of irony that their warm-up act, the eternally ageless and legendary Alice Cooper, is unofficially celebrating his 50th year in music, and shows no signs of slowing down.

In fact, ol’ Black Eyes seems to be getting better with age, performing a tight, 13-song set that focused on his string of early ’70s rock anthems – “Hello Hooray,” “No More Mr. Nice Guy” and “I’m Eighteen” among them – and an emphasis on his usual theatrics. 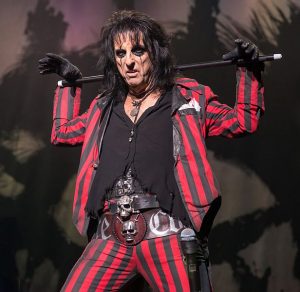 Featuring a tight five-piece band with three guitarists, including Nita Strauss, Cooper emerged wearing a red-pinstripe suit and spats. Before the next 50 minutes were over, he’d be wearing a lab coat, a straitjacket, a boa constrictor (and man, that snake was huge!), be assaulted by a zombie nurse, be transformed into a gigantic Frankenstein monster, and lose his head via guillotine.

It was a masterful performance, and somewhat of a homecoming for the Detroit-born star, whose Toronto connection, producer Bob Ezrin, was silently recognized during the finale of “School’s Out” that segued into Pink Floyd’s “Another Brick in the Wall (Part 2),” both Ezrin productions.

.So, while Mötley Crüe grinds to a full stop in early 2015, Alice Cooper turns into Dorian Gray. Something tells me this may not be the last time we see this motley bunch.