John Legend is a man is without a care in the world, it seems.

And why shouldn’t he be? Life is good for the Ohio born-and-bred singer and songwriter.

Just under a year ago, he tied the knot with his Sports Illustrated model wife Chrissy Teigen. In a recording career that’s going on its 10th year, he’s released five albums, sold eight million and won nine Grammy Awards.

And the piano-playing minstrel is blessed with an incredibly effortless, soulful tenor that has the slightest tremolo tacked on the end of it, one that promises romance and happiness and moonbeams and rainbows every time he opens his mouth. 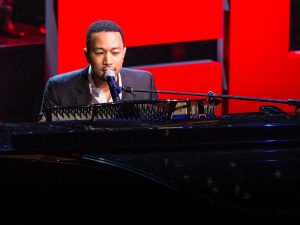 So when John Legend entertained at the Molson Amphitheatre on Friday night, he came across as extremely contented, a confident performer who knows he has made it, realized his dream and has made peace with it.

As unflappable as he was in front of perhaps the most mellow audience in the Amphitheatre’s 20-year history — seriously, one wondered if there was a collective pulse among the estimated 9,000 in attendance (and in case you perceive that as being a flop, it was triple the amount who saw him at the Sony Centre last November) considering how quiet, attentive and devoid of aural excitement they were for the first 40 minutes or so — Legend’s poise turned out to be both a blessing and a curse.

The blessing is that he’s a decent songwriter, a formidable pianist and a golden-voiced crooner who barely breaks a sweat.

The curse is that he’s a decent songwriter, a formidable pianist and a golden-voice crooner who barely breaks a sweat.

Legend’s certainly someone who places music over flashiness and production value: the stage setup was extremely economical: a handful of giant searchlights behind him, a small riser to host his string quartet, his upright bass player and his drummer, and the two giant video screens that the venue naturally provides on either side of the stage.

That was it, and truthfully, he didn’t need more.

But he could have used some sweat. After kicking off his 90-minute show by plunking himself behind his Yamaha baby grand and polishing off a slower “Made to Love” to string accompaniment, and then a bass-and-drums rendering of “Tonight (Best You Ever Had),” Legend then noodled around on the piano as he began to tell his life story.

He led his listeners through the anonymous years, mentioning how he either played piano on tracks most don’t realize (Lauryn Hill’s “Everything Is Everything,” for example), sang on others, and thought he would have a record deal when he was still a college student.

Legend talked about working as a management consultant and “delivering Powerpoint presentations” and “filling out Excel sheets” while he pursued his musical dreams, allowing that “every major label rejected me twice, including the one I’m signed to now.”

“People make mistakes,” he half-joked, mentioning how he met Kanye West, who then took Legend under his wing. Then the songs resumed, a more-or-less chronological parade of hits from his four solo albums (unfortunately, Wake Up, the album Legend recorded with The Roots, was completely ignored.) About three minutes into his narrative, you began to wonder when the server was going to show up and start taking drink orders, and during his rather milquetoast renditions of The Beatles’ “Something” and later, Michael Jackson’s “Human Nature,” you prayed for someone to shout “Free Bird” just to break up the monotony.

Things livened up a bit when Legend tackled Simon & Garfunkel’s “Bridge Over Troubled Water,” which women in the date-night-heavy crowd sang from the beginning, since they knew the words, and Legend built a steady enough momentum with hits like “Save Room,” “So High” and “Ordinary People” to earn a standing ovation, before returning with the solitary piano-only encore of his biggest hit, “All Of Me.”

Yet the dramatics remained stagnant because everything seemed so contrived, so calculated. It was clear that Legend loved being up on stage and soaking up the adulation, but you never felt that he was challenging himself in the slightest, or investing any enthusiasm in the actual moment.

If there was any impression that John Legend delivered, it was one of pianist-in-training for the late-night cocktail lounge circuit as soon as he gets tired of the road.

Be the first to comment on "John Legend’s effortless concert also effort-free: review"