Irish singer, due at Danforth Music Hall June 28, has worked with the likes of Jeff Beck, Elvis Costello and U2.

Imelda May has worked with some of rock’s most influential musicians over a career that has lasted 27 years: Jeff Beck, Van Morrison, David Gilmour, Robert Plant, Elvis Costello, Lou Reed and U2 among them.

But the Dublin singer, who just opened some Costello dates last week and plays the Danforth Music Hall Wednesday, is perplexed as to why she’s been something of a magnet as a collaborator.

“I have no idea,” May chuckled over the phone.

“I’ve gotten to work with a lot of my heroes. I just did a duet onstage with Elvis Costello. I did one with Van Morrison last week and one with Robert Plant in the last short while. I’m hoping it’s my enthusiasm for great music and great artists.”

Not surprisingly, May, who is touring with a seven-piece band in support of her Life Love Flesh Blood album, says she enjoys soaking up the talent around her. 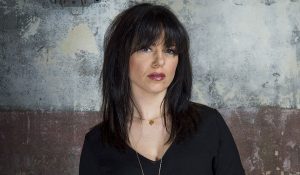 The common link between all those musicians, according to May: obsession.

“For everybody that I’ve worked with — all of those amazing legends from Jeff to Lou Reed and U2 — it’s their dedication to art. They’re absolutely obsessed with it and are free-minded, and will throw a song at you. Elvis Costello said, ‘Do you know this song? Wanna do this song with me?’ And I’ll know it by the time we get onstage. He works on impulse and I think everybody I’ve worked with has that creative freedom, which I think is imperative.”

May began writing songs when she was 14 and started performing at 16. She began with blues and eventually embraced rockabilly, with which she built her reputation as a must-see singer.

But it wasn’t until she immigrated to England that her career really began to take off, although she denies that was the catalyst for the move.

“I didn’t look at it like that,” May explains. “I was 22 and I wanted adventure. It was as simple as that. I gigged around Dublin. I loved it. I made some amazing music in some great venues, but I found I was getting too comfortable. I wanted to stretch myself. I met a man, fell in love, jumped on the boat and immigrated to London. I met a lot of wild, interesting people. I was ruled by adventure.”

Legendary British media personality Michael Parkinson hired her for a private party and then routinely invited her on to his show, later helping her secure a radio hosting gig.

But it was her album Love Tattoo that drew the attention of Jools Holland, the one-time Squeeze keyboardist who hosted BBC Two variety show Later. . . With Jools Holland, which enabled others to find her.

On a broadcast that included Pink Floyd’s Gilmour, Beck was spotted in the audience. When he was asked on camera if he was attending to see fellow guitarist Gilmour, Beck replied, “No, I’m here to see Imelda May.”

“I nearly fell over,” May recalls. Beck later hired her band for his Grammy-winning Rock ’n’ Roll Party tribute to Les Paul, with May filling in vocals for the Mary Ford parts.

They have since collaborated on a number of projects, including “Black Tears,” a song off May’s Life Love Flesh Blood.

“He’s probably the most enthusiastic man that I know. He will play you everything from the Shirelles to Bach to . . . Gene Vincent to anything. He has a great enthusiasm for things and for comedy, too. He’s just brilliant.”

Although Life Love Flesh Blood, her fifth album, retains some rockabilly and roots influence, it’s a different sound for May. Her first effort since her divorce from husband Darrel Higham, whom she calls “the best rockabilly guitarist,” the 11 songs were created from a blank slate where “I wrote over the course of year: every emotion, every life change that happened. I wrote everything down.”

She recruited Grammy-winning producer T Bone Burnett and retained U2’s Bono as mentor and adviser. After writing almost 40 songs, May said Bono helped her whittle down the list.

But he also reportedly became a bit of a thorn in Burnett’s side.

Imelda May has made a career of collaboration | Toronto Star