Time to dispel some rumours.

“It’s not a farewell tour, it’s just another tour,” says myth-buster McVie, 73, from Los Angeles of the 2018 Fleetwood Mac tour that will celebrate the Grammy winners’ 50th anniversary. “But bearing our ages in mind (Buckingham being the baby of the five at 67), we’ll have to see,” she chuckles. “It’ll be late spring of next year.”

As for Lindsey Buckingham Christine McVie, which will be largely showcased along with a few Mac nuggets at the Budweiser Stage here on Wednesday, the woman behind some of her band’s biggest hits says there was no intention behind the demos she sent to guitarist and singer Buckingham after she rejoined the band following a lengthy absence. 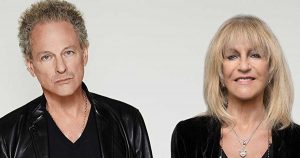 “It wasn’t (Fleetwood Mac) particularly; it was just the fact that I’d been sending demos over to Lindsey when I first rejoined the band after the 15-year hiatus,” said McVie, who quit the road in 1994 and then departed Mac four years later.

She rejoined the fold in 2014 for the band’s “On with the Show” world tour and began sending Buckingham some demos before rehearsals.

“He was mucking about with a bit of production stuff on them,” McVie recalls. “I listened to them when I got there and he said, ‘What if we got a studio for a couple of days and try to record some of these and see how they come out?’

“So that’s what we did, with no particular project in mind.”

McVie said the recordings occurred during a Stevie Nicks solo tour and the duo did six songs “really quickly” before shelving them. When the Fleetwood tour concluded, “we started thinking about these songs we had” and listened to them again.

As for the reasons behind her 15-year hiatus from the group, McVie explained there were several motives.

“First of all, I had been on the road for a very, very long time, even prior to Lindsey and Stevie,” notes McVie, who first guested on keyboards in 1968 when she was Christine Perfect, and Fleetwood Mac was a full-fledged blues band anchored by bassist John McVie, whom she married, and drummer Mick Fleetwood.

By the 1990s, McVie decided to scale back her life, although it was also complicated by an emerging phobia.

“At that point I felt that I just wanted not to live in a suitcase anymore,” McVie explains. “I also developed a chronic fear of flying. My father was ill in England and I wanted to be with him and closer to my big brother. I just felt I wanted to get my roots back.”

McVie purchased a manor in Kent that dated back to 1662 and spent four or five years restoring it.

“That was a lot of fun and then after that, I started to get twitchy musically, but I still didn’t want to fly and I didn’t think that Fleetwood Mac was an option.”

In 2004, she recorded her In the Meantime solo album with nephew Dan Perfect and even managed to fly to New York to promote the album.

“I had to get drunk to get on the plane,” she remembers. “But after that, I just didn’t want to tour. So that album has been left lurking in the shadows. The 10 people that bought it loved it.”

Then McVie said she “started to develop some problems with isolation. I started to become mentally a bit unstable. I sought out help from a psychiatrist who started to talk about my fear of flying and everything else where I was becoming a bit agoraphobic and this, that and the other.”

After four months of therapy, McVie was cured enough to arrange a visit to Maui to visit Fleetwood. She performed with him and Aerosmith singer Steven Tyler in Maui in Fleetwood’s pickup blues band and, following the success of that three-song set, asked Fleetwood if she could return to the Mac fold.

“They all said, ‘Yes . . . please!’ and then I flew over to London to perform ‘Don’t Stop’ with them at the O2,” McVie recalls. “We all felt the chemistry onstage and the circle was complete. The chain was not broken after all.”

Fast forward to the Lindsey Buckingham Christine McVie sessions, resulting in a 10-song album where both members take turns as lead singers; contributed songs mainly about love (although McVie says “Carnival Begin” is one “I had written about coming back to Fleetwood Mac) and co-wrote three tunes, with a catchy pop sound that offers Tango in the Night as a sonic reference point.

Although Christine’s ex-husband John and Fleetwood both play on the album, Buckingham and McVie are supplemented by a four-piece band for the tour.

“We’re obviously going to do some new songs — this is what this tour is about — but we’re going to do some oldies,” McVie promises. “‘Hold Me,’ we’re going to dig up from the past and we’re doing ‘Go Your Own Way,’ ‘You Make Loving Fun,’ ‘Everywhere,’ ‘Little Lies’ — things like that. And a few acoustic songs with just me and Lindsey onstage: we plan to pare some songs down. There’s a whole mishmash of things from the past and new stuff.”

With the new project and the Fleetwood Mac tour on the horizon, McVie says she’s enjoying herself at the moment.

“Life is great these days. Really great: Fortunately, I’ve got my health — the whole band has their health — we’re all sober. We’re all enjoying life and why not? We’ve got so much to look forward to, as a band and this particular duo. I can’t wait for next year. I can’t wait for the Mac tour. That’s going to be killer.”

While a tour is in the offing, the same can’t be said for new music.

“You never say never to these things, but it’s very difficult to get all five of us in the studio,” McVie says. “Things could happen, but at the moment it’s not on the table.”

Christine McVie and Lindsey Buckingham: Going their own way for now | Toronto Star

Be the first to comment on "Christine McVie and Lindsey Buckingham: Going their own way for now"