In movies they call it “The Big Payoff.”

You’ve all seen it: the two lead characters form a bond, build up romantic tension and then seal their attraction with a lengthy kiss.

On Friday night, for two hours and the first of two SRO shows at the Air Canada Centre, the Tim McGraw and Faith Hill Soul2Soul World Tour functioned as country music’s Big Payoff. 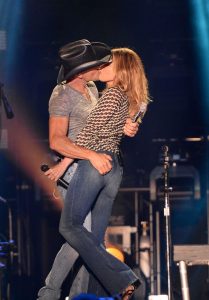 Not only was it a sequel to their previous Soul2Soul tours, launched in 2000, revived in 2006-7 and grossing more than $265 million collectively, but the stage also served as an apropos setting since country’s royal couple first met when Hill opened for McGraw for his 1996 Spontaneous Combustion Tour, indulged in a hush-hush fling and surprised everyone with their marriage later that fall.

Twenty-one years later, the fires between the buff, handsome McGraw and the stunningly beautiful Hill evidently continue to burn strongly and every effort was made during this elaborately staged, high-tech affair to fan the flames in the audience’s direction.

And it contained every element that embodies the epitome of what country music fans want for themselves, and ultimately, their superstars: a burning, passionate attraction; a playfulness teeming with respect; the appearance of deep intimacy; a man who still can’t keep his hands off his wife; family photos of the couple and their three daughters — Gracie, Maggie and Audrey; two or three loving embraces; a walk through the venue where they could “press the flesh” with their ardent followers; and of course, the lengthy kiss following their cozy encore of “I Need You,” where the couple sat and gazed into each other’s eyes, and sang of their mutual devotion, his hand on her leg, their lips separated by a microphone.

Country music lovers eat this stuff for breakfast, so for many, the firsthand privilege of sharing the same space with these lovebirds was worth the price of admission alone.

But there was also the music, a 25-song extravaganza filled with duets and where the Mr. and Mrs. both trotted out their individual hits.

It was the 49-year-old Hill who did most of the heavy lifting. Although she started off in country, the crossover successes of “This Kiss” and “Breathe” have enabled her to experiment further and explore her inner Aretha, and it was that soulfulness that was on display for the majority of the evening. That led Hill — and the 10-piece band that was backing her — to some jolting transitions, such as the first few bars of the aforementioned “This Kiss” and “Stronger,” which she dedicated to “all our Gay Pride Week friends.” Out of the two superstars, she was the one who wailed.

When it came to McGraw, 50, his biggest strength lies in his material. Still primarily anchored in country, where song is king, McGraw has made some extraordinary choices that have repeatedly endeared him to the masses. Last night, the high points were “Humble and Kind” (which most of the audience sang for him) and “Live Like You Were Dying,” a Tim Nichols–Craig Wiseman gem that had audience members serenading the song to their companions and one woman wildly waving her crutches in the air as he sang their anthem for living life to its fullest.

As a singer, McGraw may not have the greatest vocal range — although his pitch is good for what he does have — and as a performer, his limited moves alternate between standing and squatting. But he knows what people like: although he belted out “I Like It, I Love It,” “Real Good Man,” “One of Those Nights” and even a couple of lines of Bruce Springsteen’s “Hungry Heart,” there were ultimately many more hits that fans were surely hoping to hear that didn’t make the set list.

The show didn’t knock it out of the park, but it surely pleased and reassured a crowd that white picket fence values can triumph in a superstar world filled with temptation.

Be the first to comment on "Tim McGraw and Faith Hill woo Toronto fans with romantic production: review"