Songwriter behind hits by Eminem, Rihanna and Selena Gomez goes on tour to promote her own sultry urban sound, playing Toronto’s Phoenix on Thursday.

After a few years of hovering in the background and serving as collaborator, Bebe Rexha is finally grabbing the spotlight for herself.

The 27-year-old Brooklyn native, appearing at the Phoenix on Thursday, is embarking on her first headlining tour after appearing as a vocal and video foil to prominent pop stars ranging from Nicki Minaj to David Guetta. 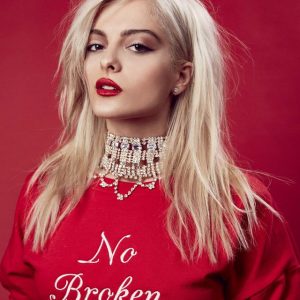 But it was her songwriting chops that elevated her into these circles, landing tunes with the likes of Selena Gomez, Nick Jonas, Iggy Azalea and, most importantly, Eminem and Rihanna, whose Rexha-penned “The Monster” became a No. 1 hit for the duo in 2013.

Scoring a smash of that magnitude allowed Rexha to bargain for creative independence.

“With ‘The Monster,’ I think people started respecting me more, allowing me to take control in the studio, and seeing me as an equal instead of telling me what to sing or what to do,” Rexha said from Portland, Ore., touring to promote All Your Fault: Pt. 1, her beguiling, six-song collection of sultry urban pop.

“It was a great feeling. It was awesome.”

Songwriting wasn’t something the daughter of Albanian parents intended to focus on while attending high school in Staten Island.

“To be quite honest, I wanted just to be a singer,” Rexha says. “But I met a lady named Samantha Cox (an executive with performing rights organization BMI) and she told me, ‘I work in royalties and help songwriters make their money when their songs get played on the radio. You need to focus on your songwriting because in the future it will give you a lot more power in your artistry.’

“I didn’t understand at the time — I thought she was just trying to stall me — but she kind of forced me to go into songwriting and I fell in love with it. Now I think it was the best decision.”

In fact, Rexha’s writing has served as the anchor for her burgeoning career: she’s co-written all the hits she’s guested on, ranging from her top 10 collaboration with Cash Cash on “Take Me Home,” a breakout U.S. dance hit; “Hey Mama” with David Guetta, Nicki Minaj and Afrojack and “In the Name of Love” with Martin Garrix.

Last year, Rexha hit a new plateau with G-Eazy and “Me, Myself & I”: it was the 10th most streamed song on the planet with over 220 million people hearing it on such digital platforms as Spotify and iTunes.

“I don’t think I would be where I’m at if it wasn’t for my songwriting,” Rexha stresses. “As a performer, was I the most beautiful? No. Was I the best dancer? No. Did I have connections? No. Was my family wealthy? Not at all. I think you need to know somebody in the industry or look a certain way — it’s a lot of luck.

“Whereas when you write songs, you are essentially in control, because if you make the art that people like it puts you in a different position than just waiting and refreshing your email every five minutes, hoping that the label or someone will send you a song that will change your life. That, to me, is a bit scary and risky. I’d rather write my own songs.”

This isn’t Rexha’s first kick at the can: in 2010, she formed the electropop dubstep band Black Cards with Fall Out Boy bass player Pete Wentz, toured the world but abandoned that project when a promised album didn’t materialize.

The stars seem to be aligning now. Her songs “No Broken Hearts” featuring Nicki Minaj, “I Got You” and her latest G-Eazy collaboration, “F.F.F.,” have accumulated millions of YouTube views.

Rexha concedes that “F.F.F.” — which stands for “F— Fake Friends” — may not get radio airplay for its repeated use of the F-bomb, but she says its strong language is warranted.

“I wrote this song when I was really upset. I was living in L.A. and I was mad that I had so many friends that had dropped me and backstabbed me. It was a real moment in time, and that’s how I stamped it.”

Asked if employing the F-word is more acceptable in songs these days, Rexha says it “depends on the context.

“The music business has changed, we’re in a different world right now. I curse all day, non-stop: that’s who I truly am. I’m not changing myself. I’m not 17. I’m 27. I think it depends how true it is to you. People are smarter than we think they are. They sense when you’re trying to be something that you’re not.”

One thing that hasn’t changed about the music business is hard work, with Rexha alternating between the road and the studio (another seven-song EP, All Your Fault: Pt. 2, is out in April.)

“I’m working at least 300 days out of the year,” Rexha says, but she isn’t complaining.

“I want to keep writing songs and keep touring and keep building the fan base, do more art. That’s like a success in itself: just being able to do what you love.”