Environmentally topical singer and songwriter Xavier Rudd has been entertaining global audiences for over a decade with his one-man set-up, an intriguing skeletal hybrid of guitar, pedals, percussion and didgeridoos, the guttural-sounding instrument of aboriginal origin native to Australia. 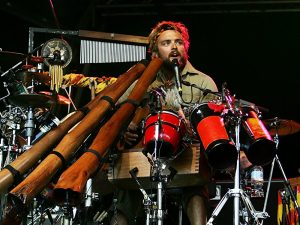 But about 18 months ago, his life — and potentially his livelihood — came crashing apart when he sustained a back injury.

“I ended up having three herniated discs, and I sort of fell apart in a lot of ways,” confesses Rudd, 34. “I had a physical meltdown — my body went into spasms and I couldn’t move for a couple months. I’ve always been a pretty physical person, so I was in shock.
“The doctor was worried that I was possibly going to lose the use of my right leg, and I was kind of dragging it, which is what was happening. So he wanted to operate on me straight away, for nerve damage. So yeah, it was a worry.
“I actually had to go under the knife 10 days before a big festival in Australia — and had emergency surgery in the end. But I’m all good now: I’m back on track.”

Not surprisingly, the sensitive Rudd, who performs Nov. 28 at the Phoenix to promote his new album Spirit Bird, remained philosophical about the ordeal.

“I sort of had to go inward, you know,” he explains. “I had to look into myself, which was more difficult than I thought. It really made me stop and go, ‘OK, where am I at,’ you know? And just took a look at myself. I’m always giving out a lot of energy, and in a lot of ways, I feel much stronger on this tour then I ever have on stage. I guess through all those experiences, it made me really respect — and hold a different space for my music — and really try and hold that space without distractions.”

The Victoria, Australia-born Rudd’s career draws some comparison with others. Like Jack Johnson, he’s a surfer, taking his board with him wherever there’s the climate for the water sport. Like Dave Matthews, he’s a festival favourite, a multi-tasking instrumentalist who is constantly expanding his rabid cult following.

While there’s a certain granola aspect to his blues-driven worldly roots music — his seventh album Spirit Bird offers “Bow Down,” an anti-corporate anthem that references oil spills; “Comfortable in My Skin,” addressing racial harmony; “Culture Bleeding,” a plea for preservation; and the respectfully holistic “Follow the Sun” amongst its samplings — Rudd says he keeps his creativity as organic as possible.

“Music is always in my system, and I sort of have a rule where I don’t involve my mind or my ego with it — I just let it come out in its rawest form, just see where it goes and it sort of opens itself up to what it needs. I’m not doing anything except letting it come out and be a vehicle for it.”

Rudd has also incorporated both Australian and Canadian aboriginal voices and participation into his albums. “I’ve always been connected to country and culture, aboriginal blood on my father’s side, I’ve always had to have that spirit with me, very strong since I was a kid.
“As a kid, I was always outside — in the bush with my dogs, on the beach, surfing. I grew up in a small town in the South of the coast of Australia and that was my life, and a lot of music came from that time, and a lot of my music came from appreciating where I was and what I was doing. I think that’s always been there — that’s still my space, still my home.”
“And as a result, I think I naturally attract that spirit and also people who care about environment and culture. I create a bit of a forum for people who come together and connect, and that’s been an indirect thing from what I do that wasn’t intentional, but has become quite a movement.
“It’s awesome, really fulfilling and makes me feel really proud.”