Rootsy troubadour has hit album, crack band and distinct outlook to show off at Danforth Music Hall on Nov. 23.

Corb Lund may not be in consideration for the role of Toronto Blue Jays manager, but at least he’s got his hand signals down.

Speaking from Charlottetown, P.E.I., the inimitable country and western raconteur reveals that he and his longtime band — Grant Siemens, Kurt Ciesla and Brady Valgardson, otherwise known as The Hurtin’ Albertans — perform every show without a set list. 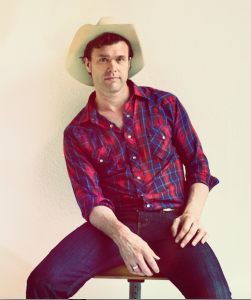 With the Alberta native’s recently released Cabin Fever — which debuted at No. 1 nationwide — adding to an impressive six-album catalogue, not to mention the occasional cover Lund sometimes pulls out of his hat mid-concert, that’s a lot of songs to retain.

But the former rancher says that to tap his band’s elephant memory of 65-70 songs, he has a proven system that he’ll repeatedly demonstrate this Friday night at the Danforth Music Hall.

“Grant is an amazing instrumentalist,” says the Edmonton-based Juno Award winner. “He plays mandolin and steel guitar and acoustic and electric, so we have a set of hand signals. Near the end of a song I’ll give him a cue so that he knows which instrument he’s going to. It’s a well-oiled machine.”

The rest of the cues Lund receives from his audience.

“I take requests occasionally. I’m not a slave to it, but if somebody really wants to hear something — especially if it’s obscure — I’ll try and do that for them. I usually put my most popular songs where I want in the set. Me and the guys have played thousands of shows together and we know each other inside out, so it’s really genuine fun because every night is different.
“If the crowd is really rocking, we can line up six or eight rockers in a row. Or if they’re really listening, I can do a group of songs that are textured, introspective or quiet. We can do both. It’s a genuinely fun way of making a living.”

It also helps that Lund writes some of the smartest and funniest songs around. In the past, he’s atypically sung about trucks getting stuck in the mud, the plight of horse soldiers, the problems of doing laundry on the road, and enough mentions of whisky to invite product endorsement.

The songs of Cabin Fever, which surprised many — including Lund — when it shot to the top of the Canadian album retail charts upon its August release, also cover diverse territory: there’s the fuzzy country blues of the darkly apocalyptic “Getting’ Down on the Mountain;” the rockabilly-hued lightheartedness of “The Gothest Girl I Can;” the Missouri-blues stomp of “Dig Gravedigger Dig,” and for the folks that like their humour, the nimble Western swing of “Cows Around” that finds Lund mentioning 23 species of bovine and milking the tune’s conclusion with his own chorus of “moos.” 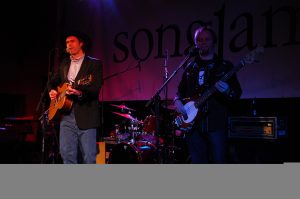 Lund, 42, considers his music to be “very western.”

“That’s the problem,” he laments. “There’s hardly any western left in country music. And when I say ‘western,’ I mean saddle stuff, horse stuff, outdoor rural living. Once in a while, somebody will write a tongue-in-cheek thing about a f—–g tractor, but it’s just lip service, right?”

Lund grew up on his parents’ ranch, but because he embraces his road warrior stature so fully touring Canada, the States and Australia, he has little time to commit to rural life.

“I’m just always on the road,” he admits. “I do have that cabin in the woods outside Edmonton. I get out of the city and get out there as often as I can, but it’s kind of a drag because I don’t have any animals, right? Maybe at some point I will. I always tell people that I hope to achieve the Ian Tyson dream: at some point you can have a ranch and have somebody run it for you while you’re away. I just don’t have any time.”

Cabin Fever was inspired by Lund’s cabin, built for him by his uncle, although the one-time member of punk band The Smalls says it recently served more as a haven from personal tribulations than artistic catalyst.

“It wasn’t to do with the music as much as my life was kind of upside down,” he explains, as the death of his uncle and a romantic breakup overwhelmed him. “So I just holed up in the woods for a while. I was up there for weeks at a time in February and March, with no electricity, just a wood stove. I was on my own solo mission for a while, so I kinda went snaky. It was a rough couple of years.”

He wrote an initial batch of songs, but nothing thrilled him.

“I just wasn’t getting anything the first year-and-a-half. I was doing the farm boy work ethic thing and wrote stuff, it just wasn’t inspiring me.
“One half of my brain knows that you can’t just force that stuff. But the other half wants to be productive. What I ended up doing was working on this stuff, or on cover songs, or my friend’s songs — anything to just get a guitar in my hands.”

Eventually, the mental block broke and Lund finished the album, issuing both electric and acoustic versions of Cabin Fever. He’s also planning a new album called Songs My Friends Wrote that he hopes to record in the spring.

“It’s the opposite of a tribute album,” Lund explains. “I’m going to record all my songwriting buddies — my favourite songs of each of theirs — and record them. That’ll include Hayes (Carll, with whom Lund duets with and co-wrote Cabin Fever’s “Bible on the Dash”), Luke Doucet, Ridley Bent, The Turnpike Troubadours and a (Ian) Tyson song.
“That’s my next immediate project.”

In the meantime, Lund, possessor of a pair of gold albums for Five Dollar Bill and Hair In My Eyes Like A Highland Steer, will be touring his new collection incessantly for the foreseeable future.

“Reaching number one was delightful and it was a surprise,” says Lund. “I’m actually more tuned into that whole thing and selling tickets to the shows than tuned into awards. Sales numbers mean you’re actually reaching real human beings, not industry people patting each other on the back.”

Lund is grateful — “I’m fortunate, because I’m in a position where I’m able to make a living at this and I have no one telling me what I can write and what I can’t write,” he says.
“I do whatever I want artistically and people come to the shows. Even if we never get any bigger, I’ve won.”