When you play the banjo like Chris “Old Man” Luedecke, you tend to hear a lot of jokes about the instrument, whether or not you want them. 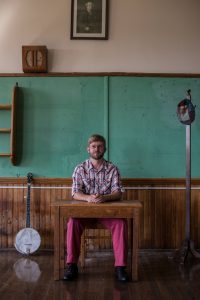 Like this one: A man needs to go to the nearby ATM, and contemplates whether to leave his car running while he goes to retrieve some cash, especially since his prized banjo is sitting in plain view in the back seat.
The man decides to risk it and is only gone a minute, but when he returns, he’s alarmed to see his auto’s back window is smashed. He looks in the back seat and sure enough, there are two banjos.

“I’ve got a better one,” says Luedecke (pronounced Lu-duh-kuh) over the line from his Chester, Nova Scotia home.
“A guy walks into a bar, goes up to the bartender and says, ‘I’ve got a really great banjo joke for you,’ Luedecke recites. “And the bartender replies, ‘I don’t think that’s a good idea. I’m a banjo player, and you see that big, scary-looking tattooed bouncer by the door? He’s a banjo player. And you see the Mafia Don with the girls hanging off his arm? He’s a banjo player. Now, do you really want to tell that banjo joke in here?’
“The guy stops for a minute, thinks and replies, ‘Not if I have to explain it three times.’ ”

It does make one wonder, why is the banjo so often maligned, designated for the Catskills-Borscht Belt indignation suffered by fellow instruments like bagpipes, the accordion and the tuba?

“On account of its uniqueness, probably,” offers Luedecke, who brings the instrument of his affection, and main compositional foundation of his last five albums, including his brand new Tender is the Night, to the Glenn Gould Theatre Thursday.

“It was definitely my first stringed instrument. I had played clarinet and piano in school. The banjo called me in a different way than guitar, and drew me into the string world and the world of singing, also.
“I like the crunch of it. I love the rhythm of the instrument. I loved the challenges it offered me for songwriting. And I thrill at the sound of it — I almost like the banjo played badly as much as I like it played well, you know? It’s something I’m kind of hooked on.”

The way the two-time Juno Award winner, who plays folk music with a capital “F,” deploys his instrument strays from the three-finger plucking style pioneered by Earl Scruggs and the rollicking, pedal-to-the-metal speedy accompaniment you hear in a lot of bluegrass and, more recently, Mumford & Sons.

Luedecke uses his banjo to serve the song, giving material like “Song for Ian Tyson” and “Little Stream of Whiskey” an emotional lift, and a vital counterpart to his prose.

And make no mistake: no vehicle is more important than the song for Old Man Luedecke. 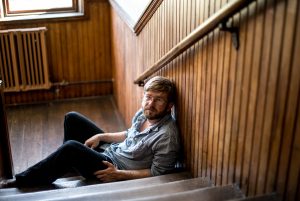 Luedecke is also on a drive to express his individualism, one of the chief reasons he recorded Tender is the Night over four days in Nashville with producer Tim O’Brien, founder of the seminal bluegrass band Hot Rize and not a bad banjo picker himself.

“With every release I’ve wanted to step up my game a little bit,” explains Luedecke, who will be releasing the album in Great Britain, Europe and Australia over the course of 2013.
“When it comes to shaping this stuff, the theme is sort of an ongoing battle in the songs about trying to live a meaningful life. Basic themes in my work are evolving and I’m sort of realizing how my individuality is incredibly important to what I do.
“Like the song ‘Tortoise and a Hare’ for example: It’s a tale of ambition, and ‘Jonah and the Whale’ also has it. So the record starts off with a real grappling with success and failure. To me, individuality is about running away from competition.”

No worries there — Old Man Luedecke is clearly in a league of his own.

Be the first to comment on "Old Man Luedecke, banjo star, picked his instrument well"