Singer Kreayshawn DOESN’T wear Gucci. “Some people are like, ‘Why does Kreayshawn love Gucci and Louis (Vuitton?). That’s all she wears.’ But they didn’t listen to the song, because it’s opposite of that.”

There’s no denial that Kreayshawn’s breakthrough video “Gucci Gucci” — a viral sensation that logged over 39 million views since it debuted last year — has generated further consumer interest in the Italian fashion and leather-goods house; any publicity is good publicity. 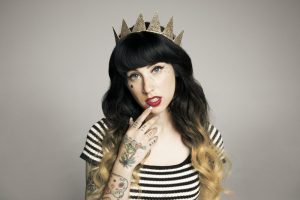 You’d have to think that either directly or indirectly, the song has helped add some more coffers to the company’s annual multibillion-dollar bottom line, by name association alone.

But the 23-year-old rapper and video director, born Natassia Gail Zolot, doesn’t see it that way.

Kreayshawn, who performs at the Hoxton on Bathurst St. on Sunday, wrote the song as a dis, and cites the popularity of the song for those who “got it” as a tacit condemnation of a corporate brand.

“I think it’s because the majority of the world hates major labels as far as clothing,” Kreayshawn sniffed via phone from Maryland. “And everyone could relate to it because everyone hates Gucci. It’s the worst clothing line ever.”
“And some people are like, ‘Why does Kreayshawn love Gucci and Louis (Vuitton?). That’s all she wears.’ But they didn’t listen to the song, because it’s opposite of that.”

At this juncture, it should be pointed out that the jury is still very much out on Kreayshawn, whose debut album Somethin ’Bout Kreay drew less than impressive first-week sales numbers of 3,900 copies in the States (as reported by HitsDailyDouble.com) when released in late September.

Even though her current single, “Go Hard,” has also accumulated millions of views, thanks to a fetching piece of self-directed cinematic eye candy that includes animal-costumed characters and Japanese-inspired animation, Kreayshawn — perhaps rap’s hybrid version of Ke$ha and Rebecca Black, due to her monotone delivery and the carefree chip on her shoulder — hasn’t set the world afire.

But it is the visual flair for her behind-the-scene talent that stops one from outright dismissing her future potential: in 2011, Kreayshawn flirted with respectability when she submitted a treatment to direct the Red Hot Chili Peppers’ single “The Adventures of Rain Dance Maggie,” and won the gig.

“It was a story about this guy who goes to a rave, and he’s lonely — it’s his first time ever venturing out and he’s getting out the house the first time and some girl drugs him,” explained the high-school dropout from Oakland, Calif., who began shooting her own videos at the age of 10. “He ends up going on a crazy trip — he’s interacting with people in the rain. The Red Hot Chili Peppers are the band playing at the rave. During the breakdown of the song it starts raining in the club, for real, and so we got a huge rain machine. On top of that we were doing graphics, so with him tripping out on drugs, there were going to be cartoon graphics on everything. It was a pretty awesome video.”

Unfortunately, it was never released to the public, as the band thought, from various reports, that the material was “too dark” and opted instead for a safer, rooftop concert video by Marc Klasfeld.

That “crazy” stuff included a verbal spat with Rick Ross in which she branded him “fake.” The notoriety she earned from that certainly hasn’t helped her predicament, and appearances of Lil Wayne and 2 Chainz in her “Breakfast” video haven’t gained her any traction with the hip-hop faithful, either.

As for her attitude, Kreayshawn is unapologetic . . . although she admits she deserves some of the flak.

“It’s important to know who you are and be confident,” she states. “That’s what the attitude is, right? Everyone should be confident in who they are. And I try not to care at all if someone says something stupid. I’ll just kind of block it out or make a joke out of it. And sometimes someone will say something about me and they’re right. And then you say ‘S—, you’re right!’ You gotta just brush it off.”

Whether Kreayshawn, who recently earned her G.E.D. and attended the Berkeley Digital Film Institute on a scholarship, is about to be brushed off by the general public is anyone’s guess.

Tellingly, after this current string of club dates draws to an end, she says “I think I’m going to take a break and figure out what I want to do with my life. I’m still growing up.”

Be the first to comment on "Kreayshawn gets misbranded"