It usually takes country music icon Willie Nelson and his backing band, The Family, a few numbers to get into that special groove of theirs. That was the case Thursday night in Toronto.
Willie Nelson and The Family performing for a Toronto crowd at Massey Hall on June 20, 2013.

What a glorious mess.

If you’ve ever seen them in concert, it usually takes country music icon Willie Nelson and his backing band, The Family, a few numbers to get into that special groove of theirs.

Thursday night was no exception, even within the intimate confines of a sold-out Massey Hall, where the band’s equipment was scaled down to the point where Paul English’s kit consisted of a single snare drum.

For the first half-dozen numbers of the 90-minute show, it seemed that Nelson, who recently celebrated his 80th birthday, was on one page, and his band — drummer English, his brother Billy on percussion and guitar, Willie’s younger sister Bobbie on piano, Kevin Smith on bass and amazing harmonica specialist Mickey Raphael — was on another.

That’s because Nelson, who is busily picking and strumming Trigger, his well-worn acoustic guitar, rarely plays his songs like the recordings. He’s constantly shifting his vocal phrasing, plucking out and squeezing in notes and improvising solos with whatever feels right to him at the time; relying more on casual instinct than any sense of pre-determination. 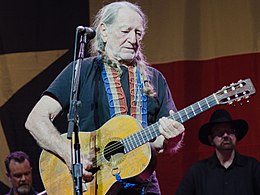 And the band is trying to follow and keep up with him, while maintaining the metronomic pace of the arrangement.

For example, the pig-tailed Nelson, dressed in his typical T-shirt, jeans and runners and sporting a strong voice, opened the show with the three songs that got him started on his road to fame and fortune: “Funny How Time Slips Away,” “Crazy” (made famous by Patsy Cline) and “Night Life.”

But it took listeners about halfway into the tagline of the title before they realized it was “Funny,” as Nelson shuffled the melody, gave it a blues sheen, and then melted it into “Crazy,” repeating the process with “Night Life.”

As much as the multiple Grammy Award-winning Texan is known for country, his delivery is pure jazz, which is why the billing of this show as an ostensible warm-up for the TD Toronto Jazz Festival isn’t so farfetched.

After the introductory trio, Nelson launched into the old standby “Whiskey River” before moving into the jazzier and more contemporary “Still Is Still Moving To Me” before throwing over the spotlight to sister Bobbie for her instrumental rendition “Down Yonder.”

Then it was time for the first Willie costume change — he doffed his black cowboy hat in favour of his trademark bandana, and then it was off to the races for a couple of his Waylon Jennings duets: “Good Hearted Woman” and “Mammas (sic) Don’t Let Your Babies Grow Up To Be Cowboys,” turning the choruses into sing-a-longs from the primarily older-skewed crowd who first embraced Nelson during his Red Headed Stranger and Stardust days.

In fact, it was during a moving rendition of “Always On My Mind,” that whatever perceived chasm between leader and band closed, and the melding made for the concert’s most sublime moment.

The hits flew by early — “Blue Eyes Crying In The Rain,” “Georgia On My Mind” and the inimitable touring anthem “On The Road Again” – and there was a Hank Williams tribute (“Jambalaya,” “Hey Good Lookin’ ” and “Move It On Over”) where Nelson furiously plucked away on his guitar, wearing his Django Reinhardt influence on his sleeve.

For showmanship, every so often he’d tear the bandana off his head and whip it into the crowd, replacing it with a new one and repeating the gesture a few songs later. His gait was a little stiff, but considering Nelson is entering his ninth decade and still performs over 100 dates annually, he seemed ageless otherwise.

And enough can’t be said about the phenomenal Mickey Raphael, whose harp skills over the decades enable him to pull back and fill in a considerable amount of the supporting sound, but then deliver articulate, nimble solos that add so much more to the arrangement.

But the crowd was there to see Willie, one of the last surviving country outlaws, and as they gathered around the stage to receive a handshake or an autograph after the one-two punch finale of “Roll Me Up and Smoke Me When I Die” and “I Saw The Light,” it was evident that their adoration will remain as eternal as Nelson’s legacy.