GOO GOO DOLLS FRONTMAN ON CHALLENGING HIMSELF ON THE BAND’S LATEST ALBUM, MAGNETIC, WRITER’S BLOCK, THE CUSTOM T-SHIRT HE WORE TO THE GRAMMYS IN 1999, AND BUILDING FURNITURE 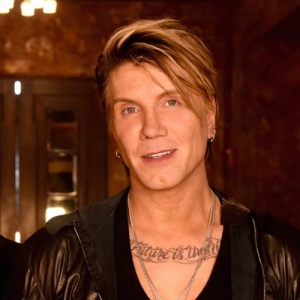 More than two decades into a career that has evolved from a punk-inspired garage band to Adult Top 40 bastions, the Buffalo, N.Y.-bred Goo Goo Dolls have returned with their latest release, 2013’s Magnetic, which is set to debut at No. 8 on the Billboard 200.

In an exclusive interview with GRAMMY.com, Rzeznik discussed the band’s new album, his future vocational endeavors and the custom T-shirt he wore the night of the 41st GRAMMY Awards in 1999 when the band’s hit “Iris” was nominated for three awards, including Song and Record Of The Year.

Is there an overall thematic concept to Magnetic?
I think the thematic concept of it kind of unwound itself after it was done already. It seems that when I listened back to the album it was saying, “Get up, get out, and live your life,” you know?

But you’ve said that on previous albums.
Yeah, it sort of got back to the theme that our band has always been about — that life may be completely screwed up, but we’ve got to make the best of it. I kind of strayed away from that on the last record. We put out a somber kind of album [with 2010’s Something For The Rest Of Us].

What’s the most satisfying aspect of Magnetic for you?
I think the biggest thing was that I absolutely had to keep my mind open and challenged all the time. I had people challenging me, great [song]writers, who said, “No, that’s not good enough. Try something else.” And then having to swallow my ego and say, “Alright, let’s find something better” — that’s what I’m most proud of. The day [Magnetic] came out, I went and bought it — just sort of a superstitious thing. [I] went back to my hotel room to one of those Bose Wave radios with a CD player in it and I listened to it top to bottom. And then I asked myself, “Are you proud of this? Did you do your best?” And I was like, “Yes!” As long as I suit up and show up and do my job, I can’t really concern myself with the stuff that is out of my hands. The collection of songs that we have on there seemed to fit together really well in one package.

You’re about to embark on a 50-date tour with Matchbox Twenty. When you perform new songs from Magnetic, how does that cure the writing process for you?
It completes it when you’re singing a new song that everybody’s seen on YouTube already, and they’re singing it back to you. That’s where it’s like, “Alright, great! I did a good job!” Does the audience like it? That’s what it’s about, you know?

How have the Goo Goo Dolls evolved since their beginning as a garage punk band?
I think the music has to evolve with you as a person. I was 19 when I started this band, and I was heavily influenced by slick, goofy-a**ed hardcore music. We just wanted to play as hard and fast as we could. The prime directive of the band was, “Drink beer. Get girls.” And when you’re a 19-year-old guy, that’s sort of what you do. But somewhere around [1993’s] Superstar Car Wash, that was really when we started to learn how to play our instruments. And I was actually stringing thoughts together that made sense. That was really the turning point for me, where I thought, “Wow, I can actually write songs. I can actually play my guitar.”

My understanding is that you were experiencing writer’s block when you wrote “Iris.” How did you overcome it?
Honestly, I was sitting there, and I had had some success with a song called “Name,” and I just got completely full of fear. I mean, writer’s block is just fear, and I think it’s specifically fear about two things: You’re afraid that you’re not going to get what you want, and you’re afraid that what you have is going to be taken away from you. At that point, I had written so many songs, and then finally one of them became a hit, and I felt that was nothing but luck. I said to myself, “OK, God  — or whatever is out there in the universe — if I’m supposed to do this, give me a sign.” That song came out and it was really a gift. I saw the film [City Of Angels] and it completely made sense to me: Now I could play a supporting role in somebody else’s creative vision. My subject matter was laid out in front of me, and then I went at it from the perspective of, “OK, what would I say if I was this guy?” Then it all came out.

“Iris” was a massive hit, hitting the Top 10 on the Billboard Hot 100. Did you know you’d hit a home run with that song after your finished it?
No, I didn’t; and then it was everywhere. I remember strangers walking up to me and saying, “You know, man, I really love that song, but I just wish they would stop playing it.” And I replied, “Yep, yep — that’s my song!” [laughs]

What do you remember about attending the 41st GRAMMY Awards in 1999?
We got nominated for three [GRAMMYs] that night, and I didn’t think we were going to win, which we didn’t. I had a T-shirt made up that I wore underneath my suit, and it said, “I was nominated for three GRAMMYs and all I got was this lousy T-shirt.” [laughs] So, I unbuttoned my shirt and people were asking me how it [felt to lose] three times. And I said, “It was pretty damn amazing that we were nominated at all!”

I understand that you’re the type of artist who likes to have a life outside of music.
This tour is going to probably be pretty long. And I’m getting married [to Melina Gallo] and I owe [her] a honeymoon. We’re going to travel a little bit and then we’re going to regroup and figure out what the next step [in] our lives is. This is going to sound crazy, but I went to a vocational training school for high school, and I’ve always been interested in building furniture. That’s something that I’m going to start messing around with. To build something tangible, like a chair, and sit in it … it’s an empirical piece of evidence of your effort. Whereas, I’ve been building songs that sort of float around in the air, and it’s all very subjective. But I think creating something solid that serves a purpose might be good for my brain.