From the very moment the curtain rose revealing the lean-and-leggy fedora-capped blond, Swift was a master of precision.

Pennsylvania native, Taylor Swift, is no wilting lily when it comes to the art of performance.

Taylor Swift is a woman who knows what she wants.

If there was anything made abundantly clear during the 22-year-old country music crossover sensation’s hour-and-45-minute shindig Friday night at the Rogers Centre it was that the Pennsylvania native is no wilting lily when it comes to the art of performance. 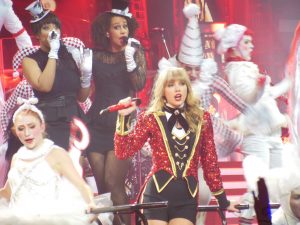 In fact, from the very moment the curtain rose on Swift’s Red tour, revealing the lean-and-leggy fedora-capped blond standing at the top of the staircase in a white blouse, leather hot pants and ruby shoes ensemble as she belted out “State Of Grace,” Swift was a master of precision.

With two projection screens adjacent to a massive stage that housed a small armada of support singers, dancers and an eight-piece band, the camera was not only the instrument of projection in providing her fans the clearest of vantage points throughout the program, but Swift designed her presentation around it.
Exuding a way-beyond-her-years confidence that befits a superstar, Swift was so concise in her mannerisms that every facial expression, every gesture, every dance move, even every hair on her head, it seemed, was expertly “Taylored” — if you’ll excuse the pun — to fit into the grand scheme of the show.
But what appeared as — and should have felt as — so contrived instead seemed perfectly genuine, due to Swift’s proficiency as a generous entertainer and her earthy personality. Perceived as both star and a pal — women view her more as the latter than the former — Swift has struck an unusual allegiance with the fairer sex thanks to the slice-of-life insight of her music.

And just how devoted they are to her — the audience percentage ratio of women-to-men was probably 90 to 10 — was made evident the fourth song in, when a chorus of soprano voices suddenly rose to accompany Swift for one of her familiar Fearless hits, “You Belong With Me,” reinterpreted in a glamourous ’60s-style presentation with the singer and songwriter adorned in a classy red gown and performing a coquettish dance routine.

Yes, Taylor World covered many territories, from the over-the-top melodramatic vignettes that gave the spectacle treatment to songs like “The Lucky One” and “I Knew You Were Trouble;” to the simple renditions of “Mean,” which began with Swift strumming a banjo before it erupted into theatrics, her earliest hit “Tim McGraw,” and an acoustic-guitar duet of “Everything Has Changed” with animated opener Ed Sheeran, the latter two songs performed on a small stage at the other end of the venue.

But where it differed from other big-time stadium shows — Swift threw out the figure of 45,000 in attendance for the first of her two sold-out Rogers Centre concerts — and what grounded it was the conversation.

Taylor Swift talked. A lot. This wasn’t mere “how ya doin’ Toronto” banter between songs. After completing the opening “State Of Grace,” “Holy Ground” (a heavily-percussive number that was part Blue Man Group in terms of drumming) and “Red,” she spent a good five minutes explaining how she chooses locations for her world tours.

Later in the show, she explained the concept behind her album and her show Red, revealing that she writes about either love or breakups and sees them in colours, with red representing “my crazy emotions.”
She spoke long and often, whether it was to introduce songs like “Begin Again” or “All Too Well,” and repeatedly advocated that people take up the practice of expressing their feelings, “whether it’s in a diary or in a song,” as a way to learn and grow.

The show wasn’t perfect. There were a few moments near the end of the show where Swift’s voice seemed to be lost in the din of the stadium, the music so loud that she was straining vocally, and others where so many dancers plied the stage that it was distracting.

But these were minor quibbles. By the time the three-ring circus of “We Are Never Ever Getting Back Together” signalled the end of the show (a jubilant send-off replete with fireworks), Taylor Swift’s near-flawless execution of her triumphant vision indicates that this is only the beginning of a very, very, very long run at the top.

She’s got the chops to become scary brilliant.

Be the first to comment on "Taylor Swift Red Tour: Flawless execution at the Rogers Centre"