Leave it up to Ivan Berry and Daniel Mekinda to strike up the brand. 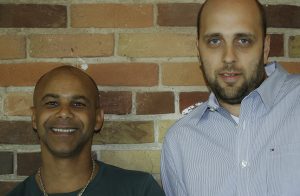 Since the music industry veterans launched Toronto-based music publisher tanjola five years ago, the duo has been consistently toiling to alter public perceptions about songwriters.

“Producers like Timbaland and The Neptunes have become extremely popular, but the songwriter doesn’t seem to get the same public due. Even on the record, the publisher is always noted in bold print and the songwriter is listed in the finest print you could possibly find – even though they’re the ones who created the song in the first place. So we’re diligently working on marketing our songwriters the way you would market artists and producers.”

“All of our songwriters make enough money that they do this full-time, writing every day. That’s a dream come true.”

According to Mekinda, tanjola holds tunesmiths in the highest regard. “We’ve always had a love and respect for songwriting,” he notes. “The core of everything we do in this industry comes down to the song and the songwriter.”

“We’ve expanded,” says Mekinda. “The hires we’ve made [in brand management, artist management, business administration, and digital marketing/strategy] are focused on developing our songwriters as much as our artists.” Tanjola isn’t only a publisher, but also a Universal Music Canada-distributed record label and an artist management firm.

The seeds for tanjola were planted in the Canadian Idol era, when Berry headed BMG Canada’s A&R department and Mekinda served under him. “Because of Canadian Idol, we had this ability to have songs written specifically for a project,” recalls Mekinda. “Ryan Malcolm, the first winner in 2003, had his complete album written as a result of a writing camp that we assembled.”

“Last year, we had 60-70 cuts globally – South Korea to Romania to Canada to the U.S. to the Middle East,” says Berry. “All of our songwriters make enough money that they do this full-time, writing every day. That’s a dream come true.

“Now it’s our goal to try to make them more money, [with] bigger songs and bigger records. But waking up every morning doing what we love, to me and Daniel, that’s success.”

Where the song comes first – SOCAN Words and Music