Vinyl Cafe and his talents take bluesman to a new

level, and the Winter Garden.

Matt Andersen is using the Vinyl Cafe as a springboard for his solo shows.

Nick Krewen
Special to the Star,
Published on Wed Oct 19 2011

Strike up another career boost for The Vinyl Café.

Beloved CBC storyteller Stuart McLean has made a habit of bringing along a promising Canadian musical talent on his cross-Canada tours, and since 2009, one of those performers has been New Brunswick-based, blues-inspired singer and songwriter Matt Andersen. 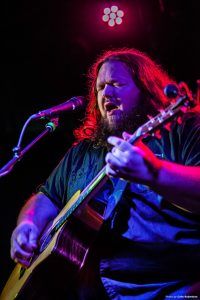 And Andersen, named 2010 Maple Blues Awards Entertainer of the Year and Acoustic Act of the Year, recognizes the impact of McLean’s support.

“I think that’s really helped a lot,” says Andersen, who will be celebrating the release of his Colin Linden-produced album Coal Mining Blues — his eighth — at the Winter Garden on Saturday.

Blessed with a booming baritone and spirited guitar technique, Andersen’s 200-show-a-year schedule is usually a solitary one, as he travels from gig to gig as a solo act.

But Andersen gets a taste of the better life whenever he joins the Vinyl Café caravan.

“It’s the closest thing I’ve ever had to a rock ‘n’ roll tour. You show up on a bus, play two songs a night and somebody else handles the merch.

“It’s pretty fun that way, but what’s amazing that Stuart’s crowds are really great. They’re pretty open to new music, and getting to play with the players they have on there is really awesome, too.”

Andersen’s only challenge: to get psyched up for performing his allotment for the program — two songs instead of a full set.

“It’s kind of hard to go out and be ‘on’ already — I only have two songs a night. You gotta make sure you don’t screw one of them up.”

It’s clear by his constantly expanding audiences that the 30-year-old isn’t blowing any chances. Noting that his return to Toronto and his stop at the thousand-seat-capacity Winter Garden is “doubling the crowd I had the last time” when he appeared for a couple of nights at the Glenn Gould Studio, Andersen’s career is escalating to the point where he confidently ordered 20,000 pressings of the new album to sell in both stores and venues.

“A lot more people have bought tickets this time without seeing me perform, which hasn’t happened before,” says Andersen, the words pouring out of his mouth as briskly as the speed limit he maintained last week while driving from Edmonton to Red Deer for another concert.

“A lot of people are buying the album before I get to the show, which is really cool. All the stuff we’re shipping out to the stores, we’re getting indications that they want more and that’s a great sign so far.”

He’s cautiously optimistic that Coal Mining Blues will be the breakthrough he’s been pining for since strapping on a guitar in 2002 after completing his recording engineer studies at London, Ontario’s Fanshawe College.

“I’ve been a huge fan of Colin’s for a long, long time — his writing, his playing, his production too,” says Andersen.

“I’ve listened to a lot of stuff that he’s worked on and knowing the sound that I wanted to get, Colin’s definitely the right kind of hook-up. His production style is really, really rootsy. He doesn’t throw a lot of flash on there — he just captures what happens.”

Of the 12 songs that comprise Coal Mining Blues — 10 originals and covers of Willie P. Bennett’s “Willie’s Diamond Joe” and Charlie Rich’s “Feel Like Going Home” — it is the title track, a quiet, intense description of a coal miner who has “the roar of a lion and the breath of a mouse” that provides the album’s most satisfying and emotional resonance.

“I’ve lived in Cape Breton for the last year and a half and that’s just hearing the stories from all those guys just about that lifestyle and how — it’s something I’ve had a lot of respect for, just how much they’ve had to give up,” Andersen explains. “It wasn’t like being a musician — it wasn’t something you wanted to be.

“It was something they went into just to take care of their families, and they make a lot of sacrifices. It always impressed me.”

The Perth-Andover, N.B. native, who appeared earlier this year at Glastonbury, an experience he compares to “putting all of New Brunswick into a field, pretty much,” will be heading to Australia, Ireland, Germany and the U.K. in the next few months, but not before excising some of his blues demons at the Winter Garden.

“It’s a big stress release,” he notes. “Some guys have a punching bag or some guys go for a walk. For me, that’s what the music does.”

Be the first to comment on "Brighter blues with Matt Andersen"