Herbie Hancock gives it all a try | Toronto Star

Herbie Hancock at home with keyboards both acoustic and electronic … thanks to Miles Davis.

Legendary jazz innovator Herbie Hancock might be considered something of a prodigy, but that doesn’t mean he’s taking his upcoming performance of George Gershwin’s “Rhapsody in Blue” with The Massey Hall Orchestra this Saturday night lightly. 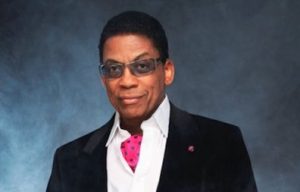 In fact, the 71-year-old Chicago native says he’s been doing his homework.

“I played ‘Rhapsody In Blue’ here in L.A. about a month ago, and I had to practice diligently for two months,” admits Hancock over the phone from his office.

“This will be the second performance of ‘Rhapsody in Blue’ that I’m playing by myself. I did perform the work with (Chinese pianist) Lang Lang — two pianos and orchestra.

“The first time was an excerpt from it in 2008, and then we did a tour in 2009, but the piano parts were divided up, and he played the tougher parts.”

Hancock, whose performance kicks off the annual Jazz @ Massey Hall Series, will perform the work unamplified with the orchestra conducted by Alain Trudel, a throwback to the way Massey Hall patrons would have heard Gershwin perform it himself when he graced the venue in 1934.

Aside from an orchestra-only performance of the composer’s Catfish Row Symphonic Suite from Porgy & Bess, the remainder of the program will be decidedly non-classical.

“I’m going to play some other pieces,” says Hancock, writer of such modern jazz standards as “Maiden Voyage,” “Chameleon” and “Watermelon Man.” 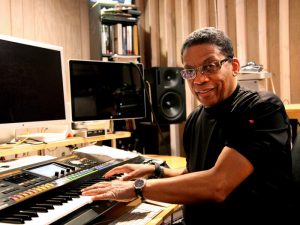 Hancock, who previously interpreted the music of the late Gershwin in his Grammy-winning 1998 album Gershwin’s World, says the Brooklyn-born composer impresses him on several fronts.

“He wrote incredible operas/operettas like Porgy & Bess and other pieces that covered a wider territory than just the jazz genre. He mixed classical music and classical influences with jazz.”

“He also wrote some beautiful melodies, but Gershwin as a jazz pianist was amazing: a great talent — and a great stride piano player, which was the style of the late ’20s through the ’30s.”

Hancock also has something of a special relationship with Massey Hall: On October 25, 2001, Hancock teamed up with trumpeter Roy Hargrove and saxophonist Michael Brecker to record the Grammy-winning Directions In Music: Live At Massey Hall — Celebrating Miles Davis & John Coltrane.

“Those were both incredible experiences,” Hancock recalls. “I do remember that when we did Directions, we felt that that live performance was one of the best of the tour, and that’s why we chose that one for a live album.

“The vibe at Massey Hall is just so encouraging and inspiring that it led to that kind of performance.”

Since releasing his first album Takin’ Off on Blue Note in 1962, Hancock has helped Miles Davis usher in jazz fusion with the landmark ’69-’70 Davis albums In A Silent Way and Bitches Brew; formed memorable combos like the V.S.O.P. Quintet (which included the immortal trumpeting icon Miles Davis’ lineup of Hancock, bass player Ron Carter, drummer Tony Williams and saxophonist Wayne Shorter with trumpeter Freddie Hubbard subbing in for Davis); the Quartet (which introduced a young Wynton Marsalis with Carter and Williams), recorded duet albums with fellow pianist Chick Corea and Shorter, and most recently, issued 2010’s ambitious The Imagine Project, uniting different artists and cultures from around the world.

Along the way, Hancock has taken jazz in innovative directions, from sophisticated modality (1965’s Maiden Voyage) to electronic jazz funk (1973’s Head Hunters, the first jazz album to sell one million copies) to radical scratch-driven dance music (1983’s Future Shock and the No. 1 smash “Rockit”) and accumulated 12 Grammy Awards (including album of the year for 1987’s Joni Mitchell tribute, River: The Joni Letters) and a 1986 Academy Award for Best Original Score for Round Midnight.

Which has he enjoyed the most?

“Each band is extraordinary because I’m basically a very curious person,” he responds. “It excites me to be exposed to something I wasn’t exposed to before and to see what I would do with it.

“I think that’s one of the most important characteristics I’d like to promote in other people: not to be afraid to examine a new idea. Be open and curious enough to examine it and draw your own conclusions.”

Although Hancock credits Tony Williams with introducing him to electronic classical music and the avant-garde jazz scene, he says it was Davis who initiated his trial-by-fire induction into the world of electric keyboards.

“At a recording session with Miles, I went to the studio and there was no acoustic piano there,” Hancock recalls. “And he pointed to the corner and he said, ‘I want you to play that!’ — and that was a Fender Rhodes electric piano.

“I’d never played one before. I don’t think I’d even heard one before. The only thing I knew was the reputation that many of the jazz pianists had expressed to me: They said, ‘Oh, it’s just a toy. It’s not a real piano.’ It was all negative.

“So that was my attitude: I turned it on, expecting to be disappointed, played a chord, and I said, ‘Oh, this sounds nice.’

“I was surprised at the mellowness of the sound, and the fact that I could turn it up and get some volume out of it, and not put weights on my fingers, which meant that I could play loud enough that the drummer wouldn’t have to tone down,” he laughs.

Hancock said he learned a valuable lesson that day.

“From that point on, I never accepted anybody else’s opinion on something or adapted it as my own until I had my own experience.”