Band playing Saturday on rise, despite any confusion about its name. Fair warning to all those recording artists — aspiring and otherwise — who decide to name their unit after a hit song: be prepared to tolerate some confusion.

Not that anyone would mistake Sultans of String‘s lively rumba and flamenco-inspired, chiefly instrumental world music for Dire Straits‘ rock gem “Sultans of Swing,” but band founder Chris McKhool admits he’s had to correct people on a few occasions.

“We were looking for a name that had that connection to world music, with the word ‘sultans,’ ” admits McKhool, whose Juno-nominated local ensemble celebrates the release of its third album, Move, at Trinity St. Paul’s Centre this Saturday night.

“We had a list of 100 names and we were trying to pick something that would intrigue people who had never heard of us before, whether we were playing festivals or soft-seaters — something that alluded to our style.

“But it’s almost too strong a pun. People will see the word ‘string’ and still say ‘swing,’ even if they’re introducing us on the radio or on stage or something. It’s always touch and go,” he laughs.

Although, to be honest, there is indeed a great amount of swing to the Sultans’ sound. Whether you’re listening to the Arabic-styled embellishments and fiery leads of McKhool’s fiddle during “Andalucia,” Chendy Leon‘s driving Afro-Cuban percussion propelling “To You” — one of Move‘s two vocal tracks — or guitarist Kevin Laliberté‘s festive, elastic rumba rhythms on “Return to Lisboa,” the music is bent on hypnotizing you into (to borrow from an old Canadian marketing initiative) participaction.

“As we were developing the band as something for world-music buffs, we wanted to go deep enough into the tradition, but fit equally well in jazz clubs or at a folk festival or a concert series that is predominantly blue-haired classical lovers,” McKhool explains. “I think we’ve created a unique crossover act.”

It also helped that the majority of players in Sultans Of String also toured with veterans — and world-music faves — Jesse Cook, Robert Michaels and Loreena McKennitt. 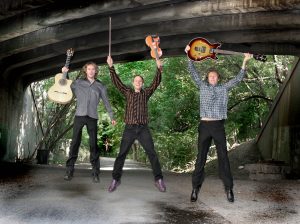 Back in 2007, McKhool’s initial enterprise was his own self-titled jazz quartet “that played all of six gigs.”

“I met Kevin when he came in as a sub for another Kevin who had the gig,” McKhool recalls. “He started playing that rumba flamenco rhythm and I fell in love with it almost immediately.”

McKhool and Laliberté scored a gig as a duo at a now-defunct North York club and came up with the material for the first two Sultans Of String albums, 2007’s Luna and 2009’s Juno-nominated Yalla Yalla! through improvisational jams, as the rest of the rotating core members — ex-Chantal Kreviazuk bass players Drew Birston and David Woodhead, guitarist Eddie Paton, and percussionists Leon and Alberto Suarez, and oud master Bassam Bishara gradually joined the team.

“When I met Kevin, he had just come off five years touring with Cook, so he had his rumba flamenco stuff down,” says McKhool, who also doubles as leader for his Juno-nominated children’s world-music act, Fiddlefire.

“His rhythm is amazing, and even his lead playing is so rhythmic that, even if I can’t hear the rhythm guitar, I can totally cash in by listening to Kevin’s lines.

“He’s really an amazing player to play with.”

The 12-track album has a couple of vocal deviations from being categorized as all-instrumental: the warm romantic English-Spanish duet “To You” featuring bassist Kirsten and his comely wife, Amanda Martinez, and a gypsy jazz rendition of Neil Young‘s “Heart of Gold,” featuring popular duo Dala.

“‘Heart of Gold’ was the very first song I learned on guitar, although I play violin in the band,” says McKhool, whose Sultans will continue to swing, er, string along for a two-week U.S. tour beginning Nov. 3 and its very first handful of U.K. dates in January.

“So we’d thought we’d try a rumba flamenco version of it.

“When we’re on tour, we sing it ourselves, but it was a really fun opportunity to get Dala to come in and sing it. We ended up being at a lot of the same festivals over the last couple of summers and a lot of the same showcase events. Like, we’re at the New York City’s Hilton Hotel showcasing, and they’re on either before us or right after us. We kept bumping into them and thought it would be a great opportunity to collaborate.”

McKhool hopes to continue that collaborative spirit at Trinity-St. Paul’s Centre on Saturday night — with free admission to high school students who show ID at the door — by promising a multitude of special guests, although both Martinez and Dala have previous commitments and will be absent from the festivities, as will one other famous Canadian diva.

“We called up Céline Dion and she was busy,” jokes McKhool.