The Grammy-winning clan of Southern rockers take 15,000 fans in the Air Canada Centre for an intense musical ride.

It’s all about momentum.

It’s one thing to show up to a venue and play your repertoire note for note — perhaps even stretch it a little here and there with an extended solo or two.

But it’s a rare night indeed when a band can actually transcend the occasion by elevating their game and add an extra dimension to their sound.

Tuesday night at the Air Canada Centre, the Kings Of Leon pulled off the sonic miracle, not only taking their distinctive brand of Southern rock up a notch or two but taking the 15,000 fans in the crowd along for the ride.

And what a ride it was. For 90 minutes, the Followill clan from Mt. Juliet, Tenn. — brothers Caleb on vocals and guitar, Jared on bass and Nathan on drums, and cousin Matthew on lead guitar — rocked the arena, liberally sampling a five-album catalogue that balances itself between potent declarations of love and interesting observations about life. 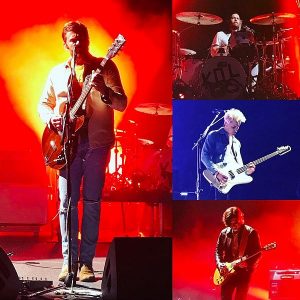 For the first five or six numbers, it was all business. The recognizable bass riff that introduced “Radioactive” from last year’s Come Around Sundown and a rather serious Caleb belting out those vocals, then jackknifing right into “Taper Jean Girl” and the driving “Four Kicks” from the band’s debut album, Aha Shake Heartbreak.

In fact, the first handful of numbers was almost overshadowed by the intensely blinding, high-tech light show, as white strobes flashed so often the show became unwatchable.

But it also gave one the feeling that their senses were being bombarded to the point that when things finally did calm down, the music seemed almost more exhilarating.

Complemented by a utility man who filled out on percussion, guitar and keyboards whenever needed, the Leons were tight from the beginning.

But their big secret in terms of turning up the power to such an impressive magnitude lay not in the tasteful licks of guitarist Matthew but within the wrists of drummer Nathan.

His steady, sturdy rhythms added an indeterminate amount of oomph to driving rockers like “Knocked Up” and “The Immortals,” with a well-placed snare hit or a tasteful cymbal fill adding a colourful texture that upped the ante for the Southern rockers.

It was noticeable to the point that whenever Caleb slowed things down, there was a night-and-day difference in the level of dynamics. The material was much more weighty when Nathan added his Midas touch.

Ironically, it was singer Caleb who was the band’s weakest link, but it certainly wasn’t from any lack of effort or desire on his part. It had more to do with the timbre of his thin, reedy voice, which echoed about the ACC rafters and got lost in the mix — although truth be told, he isn’t much of a showman.

But then again he doesn’t have to be. When the Kings Of Leon are truly in the zone, they are untouchable.

There certainly wasn’t any hint of a possible meltdown, like that experienced by a crowd in Dallas in July, when Caleb walked off the stage citing throat problems and heat exhaustion. The band ended up cancelling the next 29 dates before resuming the tour in Canada a few weeks ago.

However, there were probably a few raised eyebrows when Caleb suddenly halted “Fans” from 2007’s Because of the Times only a few bars into the song.

Turns out a seemingly malfunctioning acoustic guitar hadn’t been plugged into the amp.

“This song does sound better when I’m playing it,” Caleb quipped.

It was the only real glitch of the evening. By the time the monster Grammy-winning hits “Sex On Fire” and “Use Somebody” were trotted out for the chief set’s final number and the encore respectively, the ACC crowd was fully engaged and wishing it would never end.

Opening the Canadian leg of the tour, as part of their recent Rolling Stone “Choose The Cover” contest spoils, were The Sheepdogs, in what must be their fifth or sixth Toronto appearance in the past three months.

The southern Saskatchewan rockers proved to be a tasteful pairing to the Followills, delivering a 40-minute set that started off almost a little too cleanly at first as they showcased numbers from their indie album Learn To Burn.

It didn’t take them long to feel the love, which increased in volume and applause as more folks piled into the venue.

The duelling guitars of Ewan Currie and Leot Hanson whetted the appetite of those who love tasteful solos. Hanson’s acrobats — including lying on the stage and playing the guitar with his back arched — showed plenty of showmanship promise which you know the band will deliver once they make it to bigger venues.

By opening for the Kings Of Leon, they certainly have become aware of the possibilities.

Be the first to comment on "Review: Kings of Leon pull off sonic miracle"