Or, if you don’t have that kind of cash, the KISS rocker will hand deliver his box set for just $2,000.

Gene Simmons is at it again.

The co-founder and bassist of legendary rock band KISS, who has gained almost equivalent public stature as an audacious and shrewd marketing tycoon, has set aside most of 2018 to deliver his latest project: The Vault Experience, a 17-kilogram, 10-CD collection of 150 previously unreleased demos and recordings that he boasts is the “largest and most expensive boxed set of all time.”

And by “deliver,” Simmons means exactly that: For $2,000 (U.S.), the rock-and-reality-TV superstar will personally hand it to you at a location of your choice.

Actually, he’ll wheel it to you: The boxed set, which comes with an envious number of bells and whistles, resembles a small safe and is cumbersome enough that it rolls around on castors.

“Anyone that buys one — first come, first served because there are only a few thousand around the world — I will fly to you,” declared Simmons, who was in Toronto earlier this week to promote the venture.

“Whether you’re in Moncton or New Zealand, I will hand-deliver this to you in a convenient area — because if you live in the North Pole, I’m not going to the North Pole — I want to be upfront.

For those willing to shell out the coin for Gene Simmons: The Vault Experience, the dates for Toronto delivery have already been designated: May 5-6 and Sept. 19, 2018, with the tongue-wagging rock star promising to buy his own “plane tickets, hotel rooms, security, insurance, legal stuff — at my expense.”

Why is he doing it? Simmons, whose cartoonish, on-stage “Demon” persona has helped sell 75 million KISS albums worldwide and filled arenas countless times over, says it’s his way of personally thanking his followers for 50 years of an unimaginably wonderful musical career.

“Well, the fans made my life possible,” reasons Simmons, born Chaim Witz, 68 years ago in Haifa, Israel, and who is married to St. John’s, N.L. actor Shannon Tweed. “I mean, I have a great life. My family is taken care of. I can spend money on anything I want, although I don’t need a lot of stuff. I don’t care about stuff, mostly.

“But how do you say thank you after becoming America’s No. 1 award-winning group of all-time? That also includes Canada — yeah, we have more gold records than A Foot in Coldwater.”

His reference to a classic Toronto rock band notwithstanding, the six-foot, two-inch Simmons, reclining on a couch in an RV next to The Launch studios in Scarborough, says he’s willing to do what other superstars won’t.

“I never had Elvis (Presley) knock on my door and say, ‘Hey man, here’s my new record and thanks for being a fan,’ ” Simmons notes. “But why not? If you can afford it and you’ve got the time and you want to do it . . .”

“There will be people crying — especially if I step on their feet — and I’m going to well up as well . . . because once upon a time, I was a kid with a dream and I saw this dream come true on a scale that I never envisioned. By many estimates in the marketing world, those four KISS faces (Simmons, Paul Stanley, Ace Frehley and Peter Criss) are the most recognized faces on planet Earth.

“I don’t see (Bruce) Springsteen or (Bob) Dylan or anybody on that level who are going to go and meet and greet every single fan that buys their boxed set.”

Manufactured in partnership with Rhino Entertainment, the California-based specialty label that has previously released elaborately designed boxed sets for Ray Charles (a turntable suitcase) and Z.Z. Top (a barbecue shack), Gene Simmons: The Vault Experience includes a 50,000-word coffee table book, an action figure (which is kind of ironic, because it’s a likeness of Simmons standing with his arms crossed), a gold medallion and secret compartments, where fans will discover a unique piece of hand-picked memorabilia — “it could be a pair of leather gloves or a scarf” — from the Van Nuys, Calif.-based KISS warehouse.

A Vault “pre-pack,” including a signed golden ticket, an exclusive T-shirt, a laminate and a USB of the track “Are You Ready,” will arrive separately by email once an order is placed at GeneSimmonsVault.com or by calling 1-833-GSVault, the only way it can be ordered.

Musically, the set chronicles some of Simmons’ pre-KISS output dating back to 1966 — and there are some intriguing curiosities.

“Three of the tracks are Bob Dylan and Gene Simmons-written songs, including the Bob/Gene writing session in which he was kind enough to get into an unmarked van and come up to my house,” Simmons explains. “The Van Halen brothers — after I discovered their band and signed them to my company — were kind enough to play on three tracks. We have a power trio: Eddie and Alex and Gene Simmons. They played on ‘Christine Sixteen,’ the original version. Joe Perry from Aerosmith in 1978 plays on ‘Mongoloid Man.’ Also, it includes all the KISS guys — Ace, Paul and Peter.

“This set includes the very first song that I recorded — one of the songs that I wrote when I was about 14, called ‘My Uncle is A Raft, But He Always Keeps Me Floating.’ Oh yeah, that’s deep, Gene — but melodically, it’s not a bad song.”

Simmons is adamant that he wanted something tactile for this set and, with the exception of the single-song USB, has no intention of releasing it digitally.

“There’s no downloading, no social media — nothing,” he declares. “There’s no ‘cloud’ nonsense — get the f— out of here with that cloud s—. I wanted something real, a lifetime thing, not a ghost or a mirage.”

True to Simmons’ entrepreneurial nature, those who have a little extra cash on hand can enhance their Vault encounter. For $25,000 — and only until November — fans will get the Producer Experience, which will include a Skype call with Simmons and an invitation to the studio, where they can make notes, suggestions and get their name etched on the inside of the safe’s door as executive producers.

And if you happen to have $50,000 lying around, Simmons will deliver the set and spend the day with you and up to 25 friends.

“Few people are going to do that and that’s cool. But again, it’s about changing the relationship: doing something that’s lifetime stuff, away from retail, which is a failing model, as you know.” 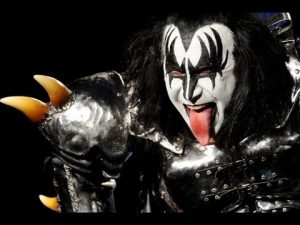 This isn’t the first time Simmons has gotten up close with his fans. In the mid-1990s, KISS staged a day-long convention tour and visited 23 cities, including Toronto. The day, held at the Sheraton Centre, included exhibits and memorabilia, several KISS cover bands and, in the early evening, an acoustic concert and Q&A session with the original quartet.

“It wasn’t personal enough,” Simmons recalls. “You came to the convention and it was like a mini-concert. You were onstage, you answered questions. Yes, we were the first ones to do that and I will take full responsibility for that.

“In those days, it was $100 per ticket but we paid for travel and everything else. But again, fans couldn’t come up and talk, touch or spend individual time, if you see what I mean. You’re still part of 1,000 people. This (The Vault Experience) is to try and change the relationship and get closer to our bosses.

“There’s this thing about celebrity — it’s far away and don’t touch me and don’t take my photo. I’m not that guy,” he adds. “I wanna do something that’s a tug of a heart. That’s why I’m doing it.”

Simmons has an estimated fortune of $300 million, has been “comfortable for decades” and has merchandised everything from urinal cakes with pictures of his face on them to KISS condoms, caskets and customized Axe guitars. But the one-time manager of Liza Minnelli remains busy, with ventures ranging from the Rock & Brews chain of 19 restaurants he shares with KISS co-founder Paul Stanley to books, films and his own line of cola.

Does money remain his main motivation?

“Well, look, (Warren) Buffett gets up every day and goes to work,” he says. “You can’t use the ‘Look Warren, you’ve got enough money, why do you get up every day?’ excuse.”

“What the f— is he supposed to do? Wait to die? Once you reach a billion or whatever that number is, what do you do? Play golf all day? I’d hang myself.

“You can amass large fortunes, and that’s great and chicks are great and fame is great. All of it is great. But unless you’ve got some passion that makes you get up in the morning, you’re just going to lay there and wait to die. So don’t minimize money or fame or sexy stuff.

“But the most important thing is that I can’t wait to get up out of this self-induced coma, sleep — which is a f—ing worthless piece of time. Let me use my brain 24 hours a day. I’d rather a shorter life and be fully awake the whole time than a long life and be comatose for a third of it. Wouldn’t you? So that’s my spiel and I’m sticking to it.”

Be the first to comment on "What does $50,000 buy? The ultimate Gene Simmons fan experience"