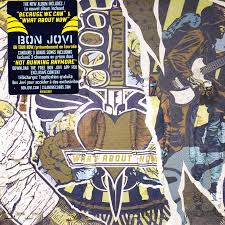 Bon Jovi may have been responsible for some of the most bombastic hairspray rock of the past two decades, but at least those albums registered a pulse.

On What About Now, the immeasurably popular New Jersey rockers’ first album since 2009’s The Circle and 12th overall of original material, the life has been sapped from the songs to the point where even singer Jon Bon Jovi seems to be trying awfully hard to sustain interest.

Bon Jovi has never been strong at soapbox sermonizing, and the proof is here in half-hearted rockers like “Army Of One” and “Because We Can,” where uplifting messages of self-reliance and hope are cleverly camouflaged in dull, uninspiring arrangements that are going through the motions.

Not doing him any favours is the inevitable comparisons he draws to that other New Jersey son, Bruce Springsteen, when he writes stuff like the low-key “The Fighter” (a low-rent response to the Boss’s “The Wrestler”, perhaps?) or “Not Running Anymore,” a replicate outtake from the Nebraska sessions.

Diehard fans may find something to hang onto, but this is one of the weakest collections of Bon Jovi’s illustrious career, and will be one of the least memorable.

DOWNLOAD: “Livin’ On A Prayer.” Yeah, it’s not on this album, but it does represent Bon Jovi at its apex.
Nick Krewen

Be the first to comment on "What About Now one of Bon Jovi’s weakest releases: album review"