Pink rocked the Air Canada Centre Monday night with such mind-boggling stamina that it made you wonder at times whether she was superhuman.

The Phillie-born Pink was back in the air at the ACC Monday night. She sang “Raise Your Glass” — portions of it upside down — as a trio of beefcakes held her and her bungee cord aloft.

The burning question surrounding Pink’s first appearance at the Air Canada Centre in three-and-a-half years: Could she top the Funhouse tour?

Quite frankly, the last time Alecia Moore played these parts was an unforgettable extravaganza that not only came with all the bells, whistles and smart choreography that embraced and surpassed the literal Funhouse concept, but also featured the Grammy winner impressively singing full-throttled while twirling in the air in a safety-harnessed display of aero gymnastics. 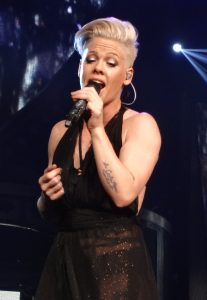 When she hit Toronto last time, she was in the midst of a number of important life changes: she was in the process of reconciling with her hubby, motocross champion Carey Hart — and had accordingly adjusted the set list to reflect less of the heartbreak that inspired her fifth CD Funhouse.

In 2011, she gave birth to her daughter Willow, and last year she bore The Truth About Love, another sexually-charged, rockin’ pop album that revealed Pink had lost none of the salty, controversial attitude of female empowerment on which she has built her reputation.

Turns out she’s lost none of the altitude either: Within moments of opening her 90-minute ACC concert as a mock contestant on “The Truth About Love” game show, the Phillie-born Pink was back in the air, singing “Raise Your Glass” — portions of it upside down, no less — as a trio of beefcakes held her and her bungee cord aloft, letting her fall intermittently as she demonstrated airborne gymnastics that would be the envy of any Olympian.

Followed quickly by the new album’s “Walk Of Shame,” and then “Just Like A Pill,” — in which she forgot the first few words and had to restart the song — Pink didn’t relent with the physicality, rolling and jumping around in a bare midriff ab-displaying costume as she sang with complete control and confidence.
Whether it was “U + Ur Hand” or “Try,” in which she re-enacted the video’s now famous choreography, Pink — added by a smoking seven-piece band that included Toronto guitarist and keyboardist Kat Lucas and another seven dancers — displayed mind-boggling stamina that made you wonder at times if she was superhuman.

That wasn’t the end of the dynamic aerial displays either, as she mounted a wire globe for “Sober” and manoeuvred her way around a battery of bodies, all the while singing as high as 20 metres above the stage.
As she performed on a two-tiered set centred around a heart-shaped screen and a couple of staircases, the blond dynamo didn’t stick to a one-note regimen of impressive physicality. “Family Portrait” was Missundaztood’s reality-grounded gem poignantly sung by Pink to piano accompaniment, and there were several moments where the blazing energy of songs was lightened by the levity of some of the between-song patter or unexpected vignettes starring a bizarre master of ceremonies.

The Truth About Love belies the truth about Pink: Here is a woman so in love with her vocation that she goes to extraordinary lengths to perfect, amuse and impress.

And her audience — particularly the 17,000 or so gathered at the ACC — are the better for it.

Be the first to comment on "Pink flies high at the ACC: Review"