Noted jazz guitarist/composer and 20-time GRAMMY winner Pat Metheny has branched out since 2010, first with his Orchestrion sessions and, more recently, with his Unity Band (now Unity Group).

Throw in a few choice numbers that dated as far back as his first solo album, 1976’s Bright Size Life, and the Missouri native’s March 19 concert at the Center for the Arts at the University of Buffalo offered a two-and-a-half-hour mixed bag of instrumental opulence that showcased impeccable musicianship and Metheny’s distinctly accessible and inimitable brand of contemporary jazz.

Commencing with a solo rendition of “The Sound Of Water” from 2007’s Quartet (which he recorded with pianist Brad Mehldau), on his custom-built, quadruple-necked, 42-string Pikasso guitar, Metheny segued into a trio of numbers from his 2012 GRAMMY-winning Unity Band album. Featuring drummer Antonio Sanchez, saxophonist Chris Potter and Ben Williams on stand-up bass, the musical interplay between the quartet stayed sensitive to dynamic range while exhibiting an enviable chemistry that set the tone for most of the evening.

Following performances of “Come And See,” “Roofdogs” and “New Year,” Potter shared lead melody with Metheny on a slightly modified version of “James” (from 1981’s GRAMMY-winning Offramp), before both broke out into solos. Metheny then introduced Italian multi-instrumentalist Giulio Carmassi — whose membership turned the Unity “Band” into the Unity “Group” — and the remaining phantom musicians: namely several components of the Orchestrion, the machine commissioned by Metheny that allowed him to remotely control numerous instruments and components. 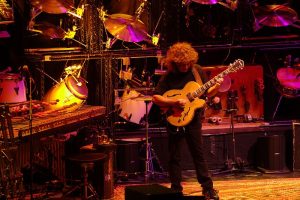 Pat Metheny and his Orchestrion…photo by Steve Rainwater, Creative Commons

As Metheny and his four-piece launched into a trio of selections from the Unity Group’s most recent album Kin (←→), lights flashed to indicate when the Orchestrion’s unmanned marimbas, cymbals, cabinets of liquid-filled and semi-filled bottles, and even an accordion were triggered by Metheny’s guitar.

More than 40 minutes later, Metheny took turns with each of his instrumental henchmen, showcasing each in a duet, with the most satisfying pairing being the back-and-forth breakneck rendition of the standard “All The Things You Are” with Potter.

Reaching back for renditions of “Have You Heard” (from 1989’s Letter From Home) and Offramp‘s “Are You Going With Me?” led Metheny to end the concert as he started: solo, with an acoustic medley that began with “Phase Dance” and incorporated his classic “This Is Not America,” which originally featured David Bowie on vocals.

The concert was an enjoyable, multi-faceted marathon that introduced first-time Metheny concertgoers to a mind-blowing musical exhibition, while reminding veterans of what a gifted genius sounds like.

To catch Pat Metheny Unity Group in a city near you, click here for tour dates.

(Nick Krewen is the Toronto-based co-author of Music From Far And Wide: Celebrating Forty Years Of The JUNO Awards, a contributor to The Routledge Film Music Sourcebook and has written forThe Toronto Star, TV Guide, Billboard, and Country Music. He was a consultant for the National Film Board’s music industry documentary Dream Machine.

)Pat Metheny Unity Group At The Center For The Arts | GRAMMY.com

Be the first to comment on "Welcome To The Set List: Pat Metheny Unity Group at Centre for the Arts, University of Buffalo"