If this is Kraftwerk’s final live hurrah in Toronto, they’ve left on a triumphant note.

A female fan rushed the Sony Centre For The Performing Arts stage shortly after the four members of Düsseldorf-based techno pop pioneers Kraftwerk had finished their encore and were taking their final bows. She made a beeline for band founder Ralf Hütter with her arms outstretched, ostensibly looking for an embrace.

She got close enough to lunge at him before security carried her away, grabbing Hütter’s headset while he dropped his shoulder and deked out to the right. However, after attempting such a brazen move, one wonders if the woman had just witnessed the same two-hour show as everyone else. This was Kraftwerk, for Pete’s sake: the human man/machine automatons whose musical legacy doesn’t exactly radiate “warm and fuzzy.”

Her first clue should have been “The Robots,” the opening number of the band’s first live Toronto performance in a decade that set the aloof and detached parameters for the evening. The quartet, dressed top to bottom in black bodysuits decorated by white grid lines, stood in front of a giant video screen, virtually motionless behind their instruments and beat boxes as a pulsing synth line and percolating electro-beat rhythm filled the packed venue.

The added dimension to the proceedings was the third one; upon entering the theatre, concertgoers were handed a pair of 3-D glasses, and the animation was greatly enhanced because of it. Four computer-generated figures representing Hütter and fellow band mates Fritz Hilpert, Henning Schmitz and Falk Grieffenhagen appeared on screen, their arms floating out over the crowd, seemingly within touching distance. 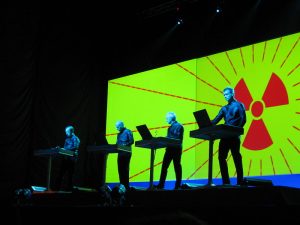 Segueing into Computer World’s “Numbers,” Kraftwerk’s 3-D Catalogue set continued to be performed with flawless precision: Hütter provided all vocals, many treated and filtered through the Vocoder, as the rest of the band remained somewhat duty-driven and emotionless, save for the occasional tapping of a foot or movement of a leg that unconsciously reacted to the rhythm its owner was performing.

Visually, there wasn’t much more to it than that. When it worked, numerical figures, lyrical snippets and geometric shapes served as intriguing and enjoyable eye candy, shooting off the screen towards the viewer. The audience cheered when a flying saucer seemingly buzzed our scalps during “Skylab.” When it didn’t work, tedium set in: Did we really need to see a 3-D Volkswagen cruising on an animated highway to nowhere for an extended rendition of “Autobahn?” Or did we really need to experience some extremely dull cycling footage as the various extended musical stages of “Tour de France” dragged on forever?

But hearing the source of such groundbreaking musical influence in a live setting — whether it’s as technical innovators of the Vocoder or the electronic drum kit, or as electro pop fundamentalists that lay the groundwork for everyone ranging from Japan’s Yellow Magic Orchestra and the new wave movement led by Gary Numan, Depeche Mode and New Order — was priceless.

Forty-four years after Hütter, 67, and co-founder Florian Schneider first set the Kraftwerk ball rolling, the railroad rhythms of “Trans-Europe Express” and the penetrating pizzicato synth hook of “Radioactivity” still enraptured decades later, even if Hütter’s voice was underserved by a bad mix that swallowed many of his words. 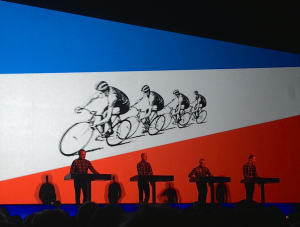 The venue could also have been better. As the club-friendly beats and pulsing rhythms of Electric Café’s “Boing Boom Tschak” and “Musique Non-Stop” throbbed their way through the speakers, the urge to stand up and dance was somewhat suppressed by the formal, soft-seater layout of the Sony Centre. A few isolated crowd members broke protocol, but they were stationed up front and had the room to do it, whereas others were sardined tightly in their seats, even when the music begged for movement.

Perhaps an arena would have been a better fit. But judging from the frenzied reaction of the 3,200 crazed Kraftwerk enthusiasts who were enthralled at seeing their unflappable heroes in action, that opinion may be in the minority.

And considering Hütter’s advancing age and his future desire to tour, if this is Kraftwerk’s final live hurrah, they’ve left on a triumphant note.